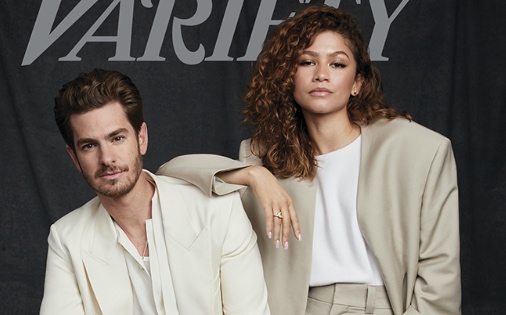 
Zendaya was sharply suited for her latest magazine cover: Variety‘s “Actors on Actors” issue, alongside her fellow “Spider Man” alumni Andrew Garfield. The issue ties into the magazine’s video series of the same name, where actors discuss the complexities behind their respective crafts and their own careers. In addition to Zendaya and Garfield, shot by Alexi Lubomirski, the 2022 portfolio includes Jennifer Aniston, Viola Davis, Anne Hathaway, Jung Ho-yeon and more.

For the occasion, the Emmy Award-winning actress wore a beige suit with a slightly oversized fit. The set included high-waisted pleated trousers, as well as a blazer with structured shoulders and a relaxed silhouette. Layered over a simple white top, the set gained a chic upgrade to allow its soft neutrals to shine. Completing Zendaya’s outfit was a delicate gold chain necklace, stud earrings and a sparkling ring.

When it came to shoes, Zendaya slipped on a pair of nude pumps with leather uppers. The pointed-toe style, hailing from Christian Louboutin, also included 3-4-insh stiletto heels and the designer’s signature red soles for a sleek touch. The style instantly streamlined her ensemble while also creating a tri-toned outfit with a chic neutral palette.

The style has been a signature of Zendaya’s over the years, worn to numerous premieres and events since she began working with stylist Law Roach. Similar pairs with triangular toes and stiletto heels — particularly when they’re in a coordinating color to one’s outfit — create a complementary streamlined effect. In fact, her ensemble echoed the gray suit and sharp Louboutin pumps she wore to the “Euphoria” FYC event in Los Angeles in April.

Within Garfield and Zendaya’s accompanying interview, the duo discussed topics ranging from their acting processes, feeling protective over characters and their experience filming “Spider Man: No Way Home” together.

“We talk about ‘Spider-Man,’ but the amount of joy that brought people is so cool,” Zendaya tells Garfield during their chat. “Like, to see you guys have that moment together was special, but then also the effect that had on so many people.”

You can watch the pair’s discussion on YouTube, below:

When it comes to shoes, the former “Shake It Up” actress has been spotted in strappy sandals, boots and pumps from Jimmy Choo, Roger Vivier and Casadei. She also serves as a frequent collaborator with fashion brands including Tommy Hilfiger and as a brand ambassador for Valentino, Bulgari, Lancôme and Covergirl Cosmetics. The actress has even ventured into designing, having launched her affordable clothing line, Daya by Zendaya, in 2016. Zendaya has become a front-row fixture during fashion month as well, attending runway shows for Michael Kors, Vera Wang, Louis Vuitton, Rebecca Minkoff and others.