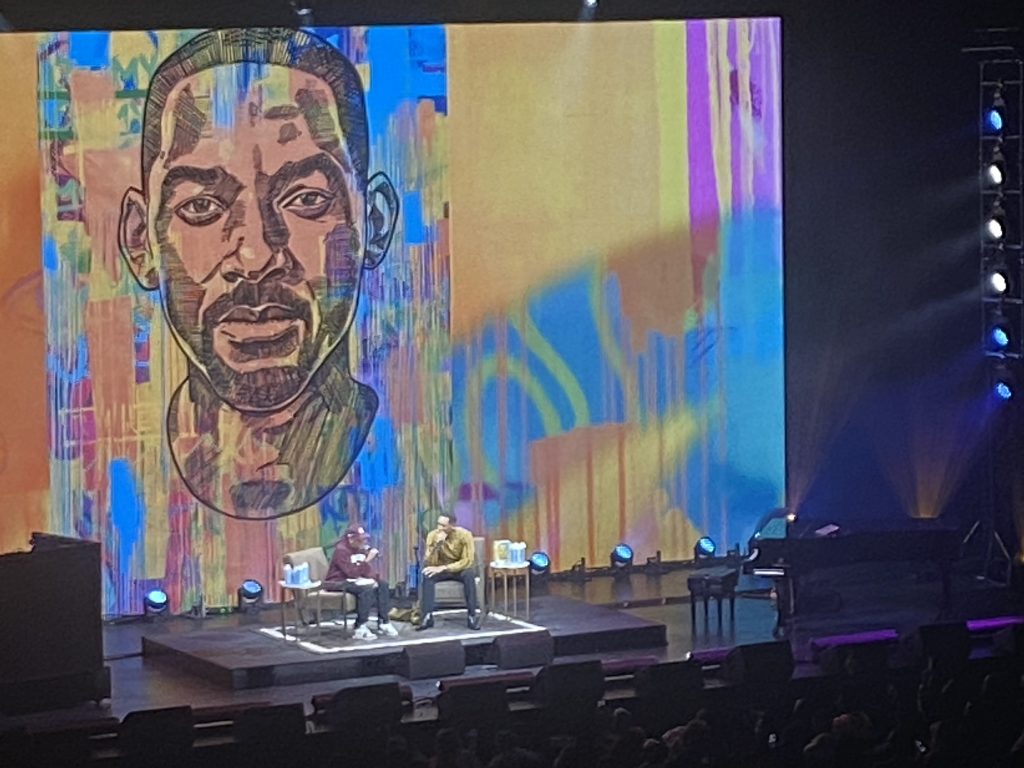 
Will Smith started the night rapping — then settled in next to Spike Lee as a Hollywood star and now an author. Whatever he did on stage, the multi-talented actor was cheered by adoring fans in the filled-to-capacity 3,000-seat historic Kings Theatre, a grandly restored former 1929 movie palace turned performance space in the heart of Brooklyn. This was a book event unlike most to promote his new autobiography Will. Copies piled high on tables were included with a ticket.

Will was written over three years with Mark Manson after Smith said he’d reached a pinnacle of success and was ready to “give back.” The night was a video-music-storytelling voyage through his life as a kid in West Philly to stardom to self-actualization. He read from the opening chapter, called Fear (of his former military father mostly) and closed with a story about the two reconciling in the weeks before his dad’s death in 2016.

At one point he moved to a stool and spoke accompanied by a background piano. At another the former Fresh Prince of Bel-Air was joined by his former cast mate and rap partner DJ Jazzy Jeff. (The duo were the first rappers to win a Grammy for the Best Rap Performance for the single ‘Parents Just Don’t Understand’ in 1989.)

“Desire is when you want something for you, and purpose is when your desire encompasses the wellbeing of others,” Smith said. “It’s really a slippery slope. I decided I wanted to be the biggest move star in the world. And when you want something like that it demands attention and sacrifices and sometimes you may not necessarily know what you are giving up in the process.”

An ace storyteller, he voiced Quincy Jones forcing him to unexpectedly audition for Fresh Prince at a massive birthday bash at the Thriller producer’s mansion. Then-NBC executives Warren Littlefield and the late Brandon Tartikoff were both guests and the contract was signed that night for Smith to headline the iconic show that ran from 1990 for six seasons.

He didn’t dwell on his long run of Hollywood hits, except for a mention of the 1996 blockbuster Independence Day. His dad called him at 3 am PT the morning after opening night and said: “Did you see the numbers? Remember when I told you there’s no such thing as luck…Only what you make…Remember I told you, luck was where opportunity meets preparation? Man, that’s a bunch of bullsh-t, you’re the luckiest mother f-cker ever.”

(An extended trailer for King Richard, which opens Nov. 19, played before he came on stage. Smith plays Richard Williams, the father of tennis stars Venus and Serena.)

Smith and Lee talked lovingly about their grandmothers. He called her Gigi. “She taught me about faith about god about love, what it looks like, what it feels like,” Smith said. He recalled what happened after she found a book of his early teenage rap lyrics and wrote a note inside. It said, “Dear Willard, truly intelligent people do not have to use words like this to express themselves. Please show the world that you are as smart as we think you are.”

“That’s why in my early rap career I didn’t curse in any of my records and I got bashed for that. Soft and corny and not black enough and all of that. But the thing is there was no peer pressure that was more powerful than Gigi pressure. She missionized me in the world in a way I knew I wasn’t going into the world just for me.”