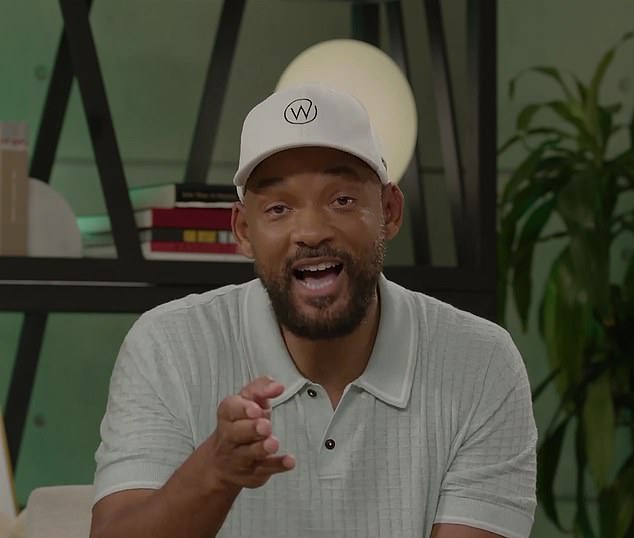 
Will Smith is back in talks with Netflix over a tell-all biopic just weeks after apologizing for slapping Chris Rock at The Oscars according to a new report.

It is claimed that the 53-year-old Academy Award winner was in negotiations with major streaming services over a film following his life which were halted after the ugly physical altercation with the 57-year-old comedian.

Now, at least one major corporation is open to doing business with Smith according to The Sun on Friday as a source said: ‘Will was left out in the cold by Netflix and Apple TV+ in the wake of the slap.

‘He has since apologized and stepped out of the spotlight for a lengthy period. With this in mind it is broadly agreed enough time has passed to let the dust settle.’

Telling his side? Will Smith is back in talks with Netflix over a tell-all biopic just weeks after apologizing for slapping Chris Rock at The Oscars according to a new report from The Sun 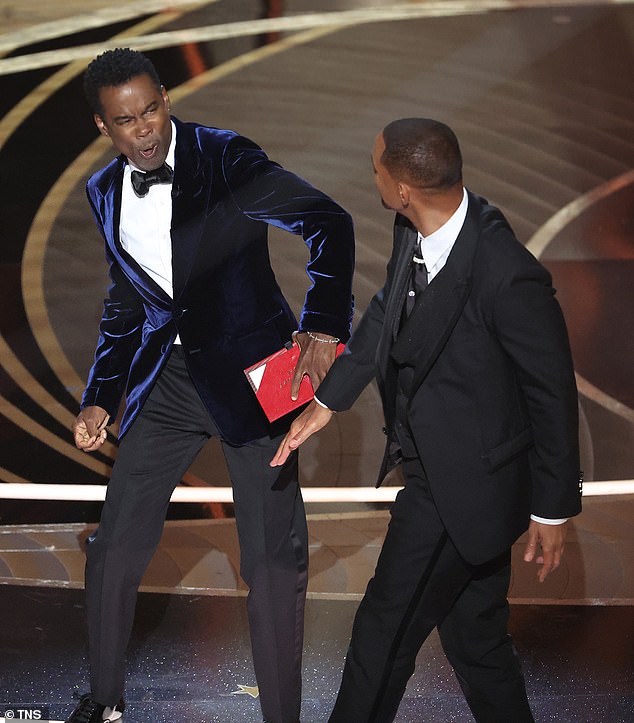 The slap heard round the world: Smith slapped Rock on March 27 at the 94th Academy Awards

‘It has been made clear discussions can be started again about a biopic which Netflix were interested in.’

No doubt that the shocking incident with Rock will have to be part of of the discussions.

The insider explained: ‘Arguably, the slap, and the fallout, are pivotal moments in Will’s life and will become part of the storyline of his life.

‘Netflix wants to be part of those conversations and Will’s team have no doubt Apple will follow suit.’ 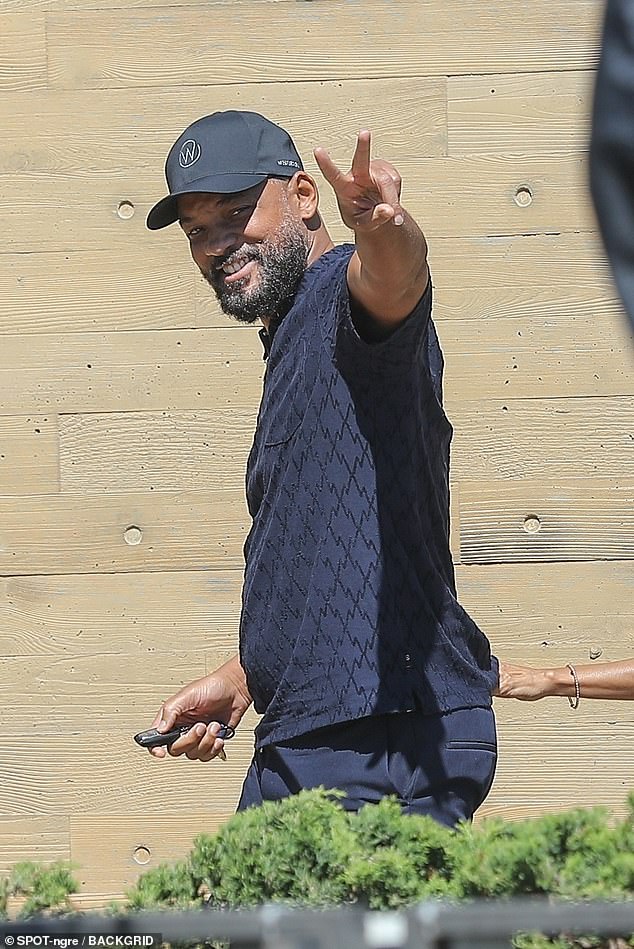 ‘Arguably, the slap, and the fallout, are pivotal moments in Will’s life and will become part of the storyline of his life’: No doubt that the shocking incident with Rock will have to be part of of the discussions, as Will is seen in Malibu last week

On July 29, Smith issued another groveling apology to Rock and revealed his former friend still hasn’t forgiven him for slapping him on-stage at the Oscars.

Smith said he’d taken the last three months to ‘work’ on himself and realized now  how many people he hurt when he smacked Rock on stage at the awards.

‘I’ve reached out to Chris and the message that came back is that he’s not ready to talk when he is, he will reach out. So I will say to you, Chris, I apologize to you. My behavior was unacceptable and I’m here whenever you’re ready to talk.’

‘I want to apologize to Tony Rock… Tony Rock was my man and this is probably irreparable,’ he said.

He also apologized to Jada Pinkett Smith, his wife whose honor he claimed to be defending with the outburst, and said she had ‘nothing to do with it’. 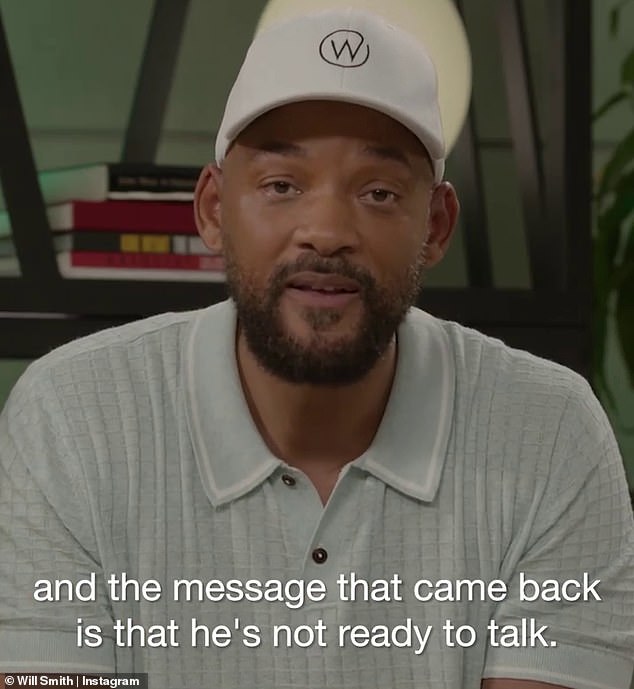 The actor posted the video on Instagram on Friday where said he was ‘fogged out’ during his acceptance speech, and that is why he did not apologize to Rock. ‘I’ve reached out to Chris and the message that came back is that he’s not ready to talk when he is, he will reach out 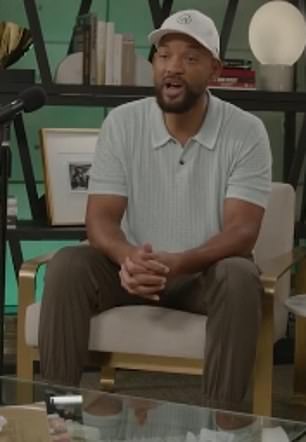 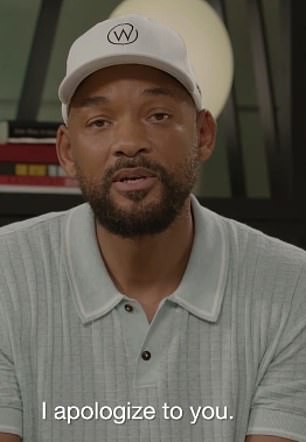 ‘I spent the last three months replaying and understanding the nuances and the complexities of what happened in that moment. 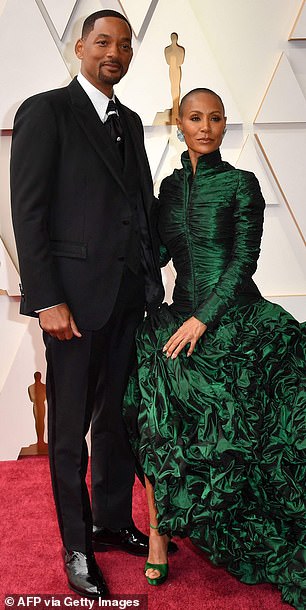 Smith’s wife Jada Pinkett Smith had recently revealed that she was suffering alopecia and had shaved her head. Rock joked during his hosting set that she looked like ‘G.I. Jane’

‘I’m not going to try to unpack all of that right now but I can say to all of you,  there is no part of me that thinks that was the right way to behave in that moment.

‘There is no part of me that thinks that’s the optimal way to handle a feeling of disrespect or insults.’

Rock, who was hosting the show, joked that Smith’s wife Jada looked like ‘G.I. Jane’ because of her bald head.

She had recently revealed that she suffers from alopecia.

Smith stormed the stage and slapped Rock after fuming: ‘Keep my wife’s name out of your f*****g mouth.’

He went on to win Best Actor for his role in King Richard that night, but he did not specifically apologize to Rock.

Insisting that his wife had nothing to do with the slap, he went on: ‘I made a choice of my own from my own experiences from my history with Chris.

‘Jada had nothing to do with it. I’m sorry, babe.

‘I want to say sorry to my kids and my family for the heat that I brought on all of us.

‘To all my fellow nominees, this is a community.

‘It’s like, I won because you voted for me and it breaks my heart to have stolen and tarnished your moment.’

Smith went on to claim that ‘disappointing people’ is his ‘central trauma’.

‘Disappointing people is my central trauma. I hate when I let people down so it hurts.

‘It hurts me psychologically and emotionally to know I didn’t live up to people’s image and impression of me, and the work I am trying to do is I am deeply remorseful.

‘And I’m trying to be remorseful without being ashamed of myself. I’m human and I made a mistake and I’m trying not to think of myself as a piece of s**t.

‘I would say to those people I know it was confusing, I know it was shocking, but I promise you I am deeply devoted and committed to putting light and love and joy into the world.

‘And, you know, if you hang on I promise we’ll be able to be friends again,’ he said to the fans he had let down.

Rock only recently addressed the controversy at a Madison Square Garden show, where he laughed it off.

‘Anyone who says words hurt has never been punched in the face,’ he told the crowd.

Smith issued his first apology to Rock back in March. He posted a lengthy statement on Instagram where he said ‘violence in all its forms’ was wrong. 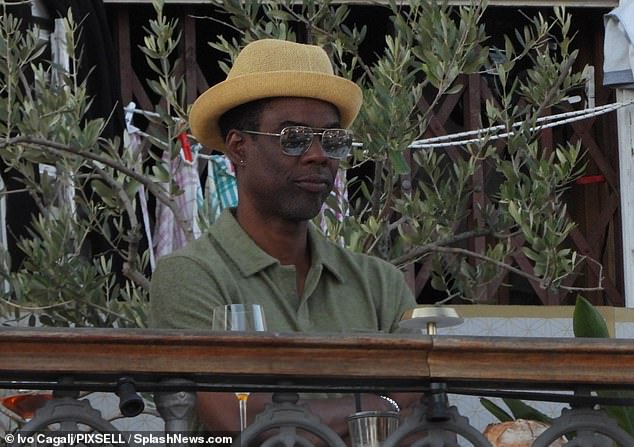 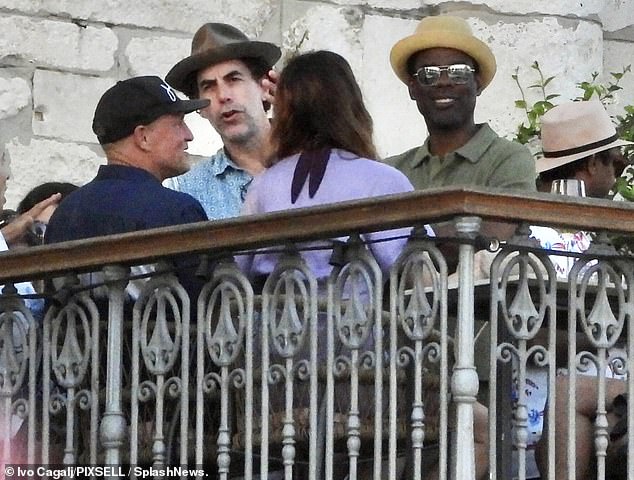 Chris Rock with his new girlfriend Lake Bell and actor Woody Harrelson. Smith was not invited