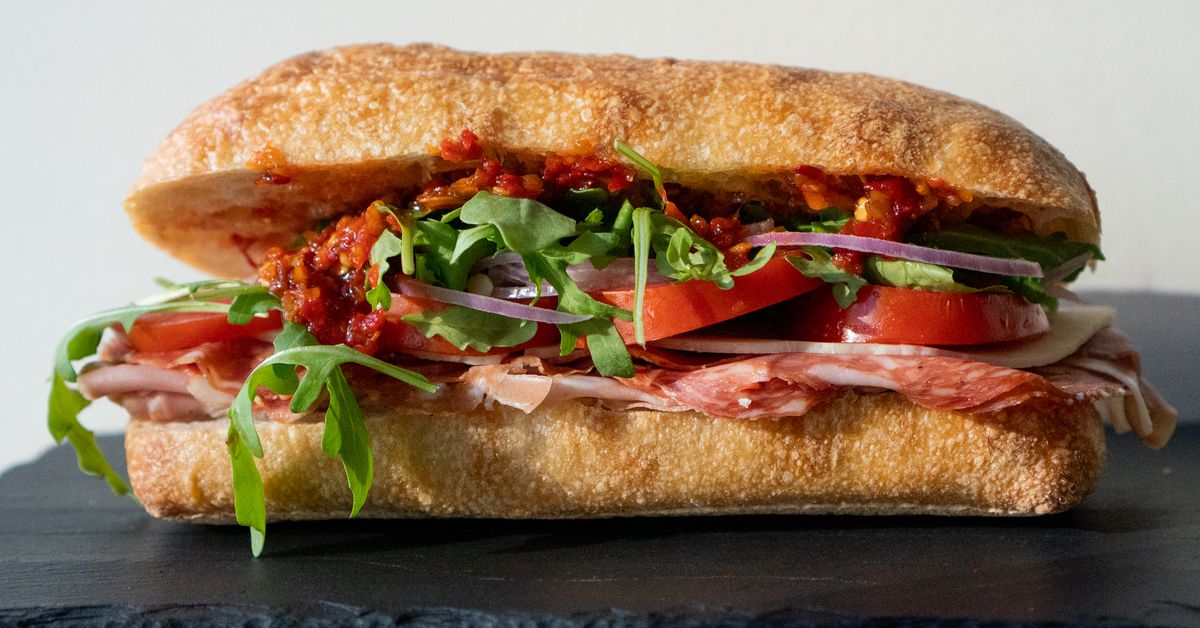 
Found around the country under several different names, the beloved sandwich spread known locally as “hots” is very difficult to Google. While other regional delights (like stuffies) and vernacular oddities (like frappes) get plenty of air time, hots remains somewhat of an unsung hero among New England specialties. Surely it deserves a little attention.

To that end, this was meant to be an article celebrating hots’s regional identity and unique place in the pantheon of local condiments. And it still is. But as it turns out, the story of hots is complicated.

Among its many bewitching qualities, hots is, first of all, singular. There aren’t many terms that tack an “s” onto a familiar word while remaining stubbornly not plural, but hots does so with aplomb.

Chloe Nolan, general manager at Vinal General Store in Somerville’s Union Square, provides a textbook usage: “Hots is my favorite condiment of all time,” she says.

At Vinal General Store, hots is mixed with mayo to form the marquee condiment — “hots mayo” — on the Vinal Spuckie, itself a hyperlocal term for an Italian sub. (“It’s a total Boston thing.”) Growing up in Norwell, Massachusetts, Nolan was used to the familiar refrains of “Lettuce, tomatoes, pickles, onions, hots?” and “Ya want hots?” at local sub shops. She cherishes hots’s particular “zip and zing” over its heat index and adds that “the seeds are important.” Nolan says she mixes hots into mayo for the sandwich because “I didn’t want it to be, like, optional.”

Because hots is slang and not a formal product name, one of Nolan’s product reps played the role of interpreter when she was initially sourcing. “I guarantee I had a talk with one of our reps where I was like, ‘Okay, this stuff, dude, is it hots? And he was like, ‘I got you. This is hots.’” While her reps procured a generic food-service brand, the 148-year-old Canton-based brand Pastene is Nolan’s go-to at home.

“You won’t see a hot crushed [pepper spread] so much like our hots,” says Mark Tosi, the fifth-generation president of Pastene, adding that they hand-select red (and not green) cherry peppers because “we eat with our eyes.” While the brand is solidly Italian American, Tosi emphasizes that hots, like many Pastene products, “crosses over” into other markets.

“Though it is a great spread for sandwiches, it’s [also] used on grilled meats, pork … down in New Bedford, Taunton, the [Portuguese American] fishermen use it on fish,” he says. The bright red color, visible seeds, and particular consistency of Pastene’s hots does recall pimenta moida — a popular condiment in the Azores in Portugal — a bit more than most Italian American hot pepper spreads, which mostly trace their roots to Calabria, Italy. But it wouldn’t be reasonable to claim a Portuguese Italian terroir for all hots in New England. Not only is it not always the same brand; as it turns out, hots doesn’t always mean the same thing. “People use different products for hots,” explains Tosi.

At Cutty’s, a popular sandwich shop in Brookline, “hots” refers to a mix of sliced pickled cherry peppers and banana peppers, not a spread. Co-owner Rachel Kelsey grew up in the area, and referring to anything related to pickled hot pepper as “hots” was a no-brainer. “A lot of people ask, what is ‘H-O-T-S?’” she says, “but that’s always what they were to me.”

At American Provisions in Southie, “If I said ‘hots’ and I got pickled banana peppers, I think I’d be pissed,” says manager Lane Cromwell. American Provisions’s Italian sub features the spread version of hots, and “people often specify, like, ‘Can I get a large Italian with hots?’ which is always funny because it only comes in one size and already comes with hots. But townies do be townies.”

To recap what is known for sure about hots: It is a spread, usually. It comprises sharp, vinegary, chopped hot peppers. It is hot — but not too hot. It is sometimes referred to as a “relish” but is not sweet. The brands who sell it call it a number of names other than “hots.” Many local sandwich and sub shops — new- and old-school — call it “hots.” It is singular, except when it is plural and refers to slices of pickled hot pepper.

Amazingly, it gets even more confusing. “We love our local,” says Boston University anthropologist Merry “Corky” White. “The funny thing is that some say ‘Boston hots’ was actually first served up at a sub shop in Baltimore.” Alas, it may be true. While “hots” is far more common in Greater Boston, there are two prominent Italian American sub shops in Baltimore that refer to pickled hot pepper spread as “hots.”

Whether or not hots culture first bloomed in Baltimore is up for debate, but even so, can Bostonians reasonably claim hots as a regional treasure after all? As White puts it, “All such meaning is constructed; origins and the search for them have their own agenda.”

Translation? Nolan at Vinal General Store puts it best: “Hots,” she says, “is a vibe.”