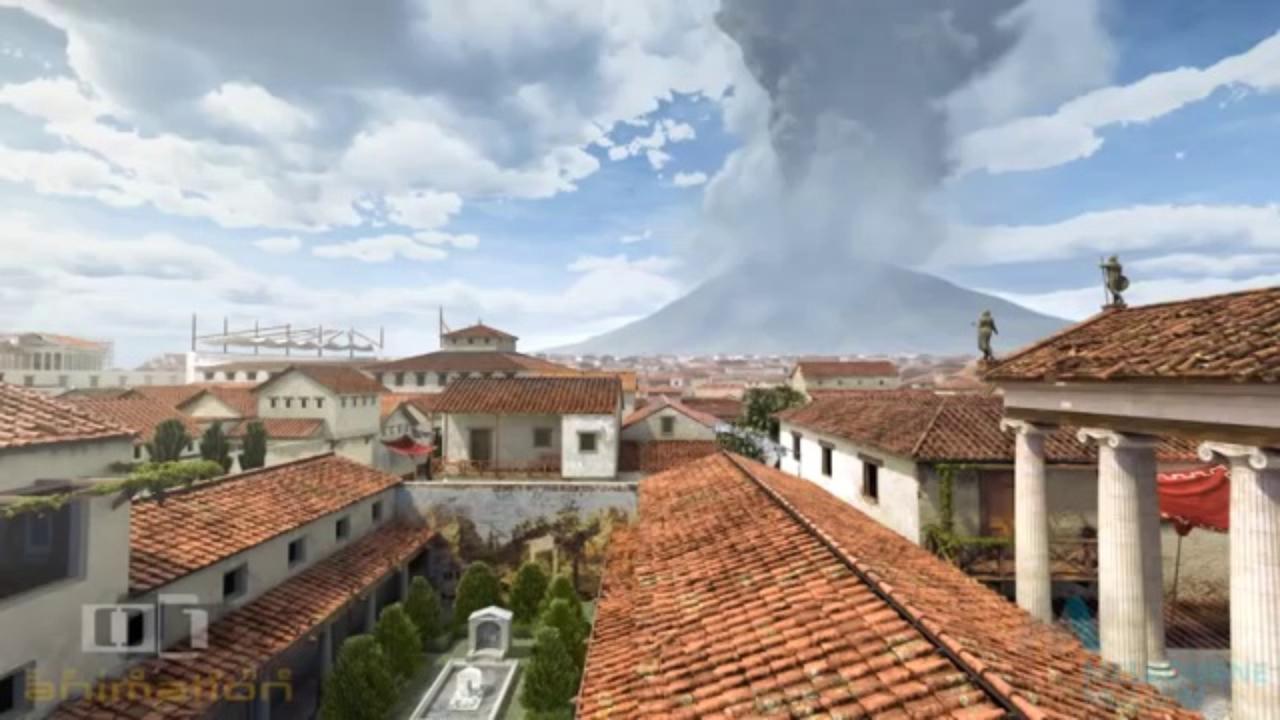 
A good disaster story never fails to fascinate — and, given that it actually happened, the story of Pompeii especially so. Buried and thus frozen in time by the eruption of Mount Vesuvius in 79 AD, the ancient Roman town of 11,000 has provided an object of great historical interest ever since its rediscovery in 1599. Baths, houses, tools and other possessions (including plenty of wine bottles), frescoes, graffiti, an ampitheater, an aqueduct, the “Villa of the Mysteries“: Pompeii has it all, as far as the stuff of first-century Roman life goes.

The ash-preserved ruins of Pompeii, more than any other source, have provided historians with a window into just what life in that time and place was like. A Day in Pompeii, an exhibition held at the Melbourne Museum in 2009, gave its more than 330,000 visitors a chance to experience Pompeii’s life even more vividly. The exhibition included a 3D theater installation that featured the animation above. Watch it, and you can see Pompeii brought back to life with computer-generated imagery — and then, in snapshots over the course of 48 hours, entombed by Vesuvius again.

As inherently compelling as we find the story of Pompeii, modern drama has struggled to capture the power of the disaster that defines it. The late-1960s BBC show Up Pompeii! offered a comedic rendering of life in the city before the explosion, but more serious interpretations, like the 2014 Hollywood movie Pompeii, met with only lukewarm critical reception. Best, it seems, to stick to the words of Pliny the Younger, witness to the destruction and still its most evocative describer:

You could hear the shrieks of women, the wailing of infants, and the shouting of men; some were calling their parents, others their children or their wives, trying to recognize them by their voices. People bewailed their own fate or that of their relatives, and there were some who prayed for death in their terror of dying. Many besought the aid of the gods, but still more imagined there were no gods left, and that the universe was plunged into eternal darkness for evermore.

Would you like to support the mission of Open Culture? Please consider making a donation to our site. It’s hard to rely 100% on ads, and your contributions will help us continue providing the best free cultural and educational materials to learners everywhere. You can contribute through PayPal, Patreon, Venmo (@openculture) and Crypto. Thanks!

Pompeii Rebuilt: A Tour of the Ancient City Before It Was Entombed by Mount Vesuvius

How the Survivors of Pompeii Escaped Mount Vesuvius’ Deadly Eruption: A TED-Ed Animation Tells the Story

See the Expansive Ruins of Pompeii Like You’ve Never Seen Them Before: Through the Eyes of a Drone