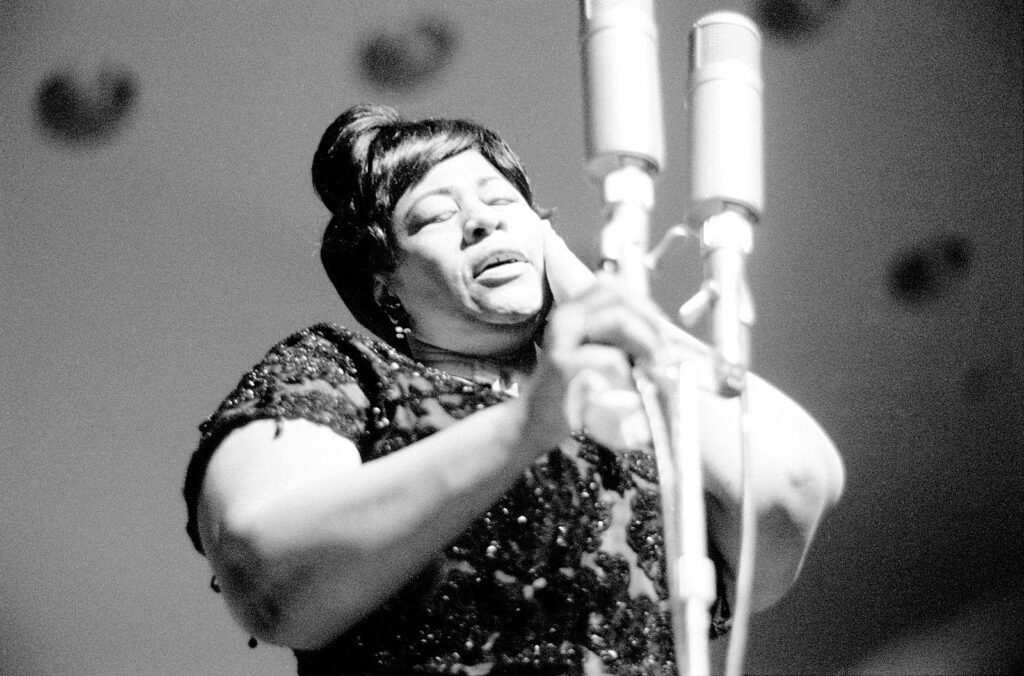 “I never knew how good our songs were until I heard Ella Fitzgerald sing them.” — Ira Gershwin

No one ever gave Ella Fitzgerald faint praise. We could point to cuts from nearly any one of her over 200 albums as evidence for why she is the undisputed “Queen of Jazz,” a title for which she worked hard in her nearly 60-year career. But she’s better known by another name, “The First Lady of Song,” for definitive interpretations of Cole Porter, Duke Ellington, Irving Berlin, and, of course, George and Ira Gershwin. Fitzgerald’s recordings of their songs played “an essential role in the broader transformation of the Gershwin’s music from show tunes to American Songbook standards,” writes the University of Michigan’s Gershwin Initiative.

What’s fascinating about that transformation is the way in which Fitzgerald’s renditions of popular songs elevated them to eternal mainstream status by drawing on the rhythmic and melodic resources of jazz, a distinctly Black American music sometimes cast as a threat to the U.S. establishment when Fitzgerald began her career. (We need look no further than the vicious persecution of Billie Holiday by the country’s first drug czar, Henry Anslinger, as case in point.) America may not always have been eager to embrace Fitzgerald, but she was happy nonetheless to gift the country its greatest music.

Fitzgerald’s 5-LP set of Gershwin songs, produced by Norman Granz in 1959, continues to be “the most ambitious of the celebrated song books recorded by Ella,” Jazz Messengers writes, “and one of the best vocal jazz albums ever made.” Recorded two years earlier by Granz in Los Angeles, her Porgy and Bess with Louis Armstrong “remains one of the true gems in jazz history.” Fitzgerald’s voice is unparalleled. She could do almost anything with it, from reaching down low to imitate Armstrong’s growl to breaking a glass with her high C for a Memorex ad twenty years later.

Dizzy Gillespie once said that Fitzgerald could sing back anything he played for her, and she cited horns as her primary vocal inspiration. “She sang like an instrument,” says pianist Billy Taylor, who played with her in the 1940s, “like a clarinet or like a trombone or like a whatever.” The irony, of course, is that horns and many other melodic instruments achieved their timbre by trying to imitate the human voice. Fitzgerald had the original; she needed no accompaniment — she was the music, with “impeccable timing and perfect pitch,” NPR writes. “In fact, band musicians said they would tune up to her voice.”

In the video at the top from a performance in Berlin in 1968, you can see Fitzgerald “destroy” the harmonic minor scale, as the YouTube uploader puts it, while pianist Tee Carson looks on in awe. The song, from Porgy and Bess (see the full performance further up), is just one of many written by the Gershwins that “transcends its musical theatre origins” due to Fitzgerald’s improvisatory brilliance and musical sensitivity. Just above, you can hear that live vocal track stripped of instrumentation except Ella’s voice in a Wings of Pegasus analysis video of the “depth of her expression” and vocal perfection.

Women of Jazz: Stream a Playlist of 91 Recordings by Great Female Jazz Musicians