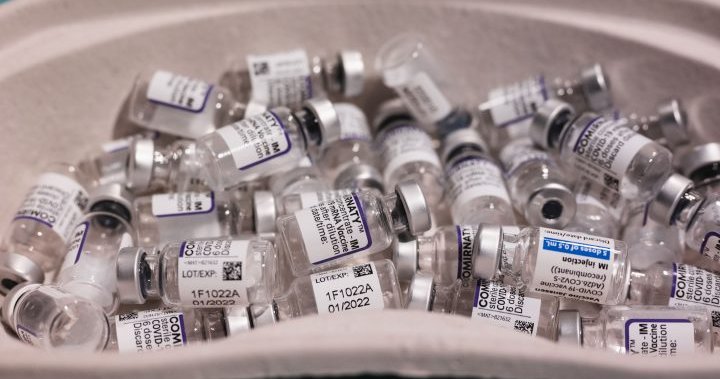 
With thousands of COVID-19 vaccine doses set to expire by the end of this month, the federal government and provinces are looking for ways to swiftly get them in people’s arms before they are forced to toss them out.

As of April 14, more than 14 million doses were sitting in the central vaccine inventory, according to the Public Health Agency of Canada (PHAC).

Among those, 429,450 doses of the Moderna vaccine will expire by the end of April, PHAC told Global News in an email on Tuesday.

Already, some 759,948 expired Moderna doses were wasted last month after expiring on March 21.

To minimize more wastage, the federal agency says it has a few options on its hands, including transferring doses between jurisdictions, donating vaccines and reviewing for any pending shelf life extensions.

Health Canada has revised expiration dates multiple times in the last year, as the companies that make the vaccines were able to get better data on how long the vaccines remained viable.

“If the shelf life of the doses cannot be extended, they will be disposed of appropriately,” PHAC said.

Provinces say vaccine wastage has been minimal so far, but with a slower uptake of booster shots amid a sixth wave, experts are concerned that not enough is being done to get the available doses into Canadian arms.

“We are allowing them to expire without even making an effort to move them forward and we’re not being transparent about it,” said Kerry Bowman, a professor of bioethics and global health at the University of Toronto.

“We need to make a clear decision as to what we need now and we need a management plan, which we have not seen,” he told Global News.

Donations are one option to manage the supply Canadians are not using.

As part of the WHO-led COVAX vaccine sharing facility, Canada has pledged to donate 38 million doses from its own domestic supplies, and another 13 million from doses Canada bought for itself from COVAX but didn’t need.

So far, Canada has only donated 15 million, but demand has fallen this year as supplies to the COVAX pool exceeded the ability of countries to get doses into arms.

Bowman criticized Canada for falling short on its promises to help low-income countries, saying it “has not been a priority for Canada”.

While wastage in any vaccination campaign is not uncommon as more doses are ordered than needed, the waste during the COVID-19 pandemic has been “a bit higher than normal,” said Dr. Dasantila Golemi-Kotra, an associate professor of microbiology at York University.

“There is a need and the efforts have to be made to tell the public that we are not done with the virus.”

Where do provinces stand?

Global News reached out to all 10 provinces and three territories and asked about their current vaccine stockpile, how many doses have been wasted and how they were planning to manage the supply.

Here is what they had to say.

Quebec currently has approximately 3.8 million doses of different COVID-19 vaccines. Some 120,000 doses will expire in May, and another 672,000 in June, a spokesperson for Quebec’s Ministry of Health and Social Services (MSSS) told Global News.

By the end of March 2022, 107,501 doses, of mostly Moderna, were destroyed as they had passed the expiration date, Robert Maranda, MSSS spokesperson, said.

Manitoba has roughly 320,000 COVID-19 doses in stock at its provincial warehouse, which are due to expire in May through August 2022, a provincial spokesperson said.

Since the start of Manitoba’s COVID-19 immunization program, wastage has been limited to two per cent.

As of early March, more than 182,000 doses had been provided by Manitoba for federal redistribution.

“The province anticipates minimal wastage from the current inventory potentially due to vaccine exceeding storage time allowances for refrigerated conditions and punctured vials, as well as exceeding the product expiry date,” the ministry told Global News in an email.

To mitigate vaccine wastage, Saskatchewan has been redistributing doses within the province, offering to other jurisdictions or releasing back to the federal government, the ministry said.

The province anticipates that less than 100 doses of vaccine will expire later this month, according to Dr. Heather Morrison, P.E.I’s chief public health officer.

“We will be exploring options in neighboring provinces to reallocate expiring doses to see if they can be used before their expiry date,” she told Global News.

“Some wastage is difficult to avoid given the demand for some vaccines is very low (e.g., AstraZeneca and Janssen),” Morrison said, adding that the province aims to keep wastage to a minimum.

“In the coming months, we do not foresee any other vaccine wastage, due to product expiry.”

In Alberta, to date, approximately 13 per cent of the doses that the province has received from the federal government have been wasted or expired.

“Some wastage is inevitable with the current COVID vaccines, as unused doses from multi-use vials must be discarded after 12 hours, and we are supplying more than 1,000 locations across the province in order to maximize access and help get more Albertans vaccinated,” Alberta Health told Global News.

Canada’s most populous province, Ontario, did not provide any data about its current vaccine supply and wasted doses.

In an emailed response to Global News, Bill Campbell, a spokesperson for Ontario’s Ministry of Health said: “We continue to monitor and ensure vaccines are focused in areas of need while also working with our federal partners to explore opportunities to donate additional vaccine doses.”

Despite multiple requests, Global News did not get a response from British Columbia, Nova Scotia, Newfoundland and Labrador and New Brunswick by the time of publication.

Experts say there should be greater transparency when it comes to disclosing vaccine information.

Both Bowman and Golemi-Kotra suspect the secrecy with wastage numbers stems from provinces not wanting to look bad.

“It doesn’t reflect well on the provinces that so much of these vaccines were acquired, and yet many were left unused,” said Golemi-Kotra.

2:27
Ontario won’t say how many AstraZeneca COVID-19 vaccine are at risk of expiring

Ontario won’t say how many AstraZeneca COVID-19 vaccine are at risk of expiring – May 28, 2021

Bowman said Canadians have a right to know how much the government paid for the vaccines and what the disposed doses are going to cost.

He believes disclosing this information could in fact help bolster the vaccinations campaign and increase uptake.

— with files from The Canadian Press