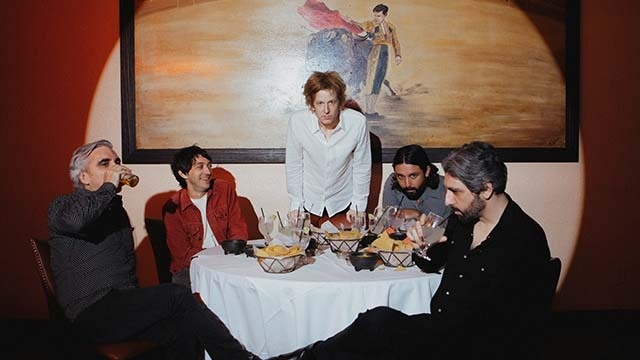 As any fan of Spoon knows, tapping into rock traditions in timeless and original-sounding ways is the band’s superpower. With Telephono and A Series of Sneaks, they reinvented the brusque and brainy sounds of bands like Wire years before the post-punk revival became fashionable. As their music grew more successful, it also grew more wide-ranging. Shades of the Kinks, Motown, and Elvis Costello added lively colors to Spoon’s sound on Girls Can Tell and Kill the Moonlight, while everything from kotos to reggae samples embellished the razor-sharp songwriting of Ga Ga Ga Ga Ga. On their new album Lucifer on the Sofa, Spoon use their allusions as skillfully as ever. Shaped by frontman Britt Daniel‘s return to his hometown of Austin, Texas, the band’s electrifying shows in support of their last album, Hot Thoughts — and how much they missed playing live when COVID-19 made that next to impossible — Lucifer on the Sofa finds the band reconnecting with rock in vibrant ways, as on the single “The Hardest Cut.”

Daniel walked us through the artists, songs, and albums that influenced the sound of the album and Spoon’s music overall. Once back in Austin — but before the pandemic shut down the city’s thriving live music scene — he made a point of seeing honky-tonk artist Dale Watson‘s regular shows at revered local venue The Continental Club (for those new to Watson, he recommends Carryin’ On and The Sun Sessions). Daniel’s return to Texas also coincided with his discovery of one of the Lone Star State’s finest bands. “I spent a lot of 2018 and 2019 listening to ZZ Top,” he said, and also watched the documentary That Little Ol’ Band from Texas. While he admitted Eliminator is “a damn fine record,” Daniel’s favorite is Tres Hombres for the way its first two songs, “Waitin’ for the Bus” and “Jesus Just Left Chicago,” “push the album forward.” It’s easy to hear how the roomy, live feel of the production and Dusty Hill and Frank Beard’s rock-solid rhythm section complement Spoon’s music and seeped into the making of Lucifer.

Daniel and the rest of Spoon created Lucifer on the Sofa as an album to be listened to from start to finish. When asked for some of his favorite albums of the classic rock era with a similar vibe, he offered two examples. One, Led Zeppelin‘s self-titled debut album, is an undeniable masterpiece. “I’ve been getting really into that one lately,” Daniel said, and the muscular groove of “Good Times Bad Times” provides a clear antecedent to Spoon’s hard-hitting attack this time around.

The other, the Rolling Stones collection Hot Rocks, is something of a surprise. “It’s a greatest hits album, but it’s also a great introduction to the band. It’s got a tracklisting where the songs sound good together,” Daniel explained. (It’s worth noting that Spoon’s own best-of, Everything Hits at Once, is also expertly sequenced).

Fittingly for an album steeped in classic rock, Daniel’s rhythm guitar and Gerardo Larios‘ leads take a more central role on Lucifer on the Sofa than on Spoon’s previous album, 2017’s Hot Thoughts. For “The Hardest Cut,” Daniel looked to the sparring rhythm of the Who‘s “Run Run Run” for inspiration, and asked Larios to “give me a Dave Davies thing” for the solos. “She’s Got Everything,” the B-side to the 1968 single “Days,” boasts two brilliant examples of the Kinks guitarist’s wild fretwork.

One of the greatest strengths of Lucifer on the Sofa (and Spoon’s music in general) is how it makes the fundamentals of rock and pop seem fresh again. An album that feels that way to Daniel is Prince‘s Dirty Mind, and it’s hard to argue that a song like “When You Were Mine” comes close to perfection.

Going deeper into what makes a song classic, Daniel said, “The lyrics and the melody, but especially the vocals.” While John Lennon and Mick Jagger shaped his own singing style, his list of favorite vocalists ranges from former Walkmen singer Hamilton Leithauser and Cat Power‘s Chan Marshall to Aretha Franklin and Stevie Wonder, of whose 1969 hit “My Cherie Amour” Daniel said, “no one can sing like Stevie can.”

Daniel’s own songwriting is notably more to-the-point on Lucifer on the Sofa than on Spoon’s previous albums. While the music he was listening to didn’t have an influence on that — “that’s just where I was at the time,” he said — there is something timeless about how he describes a love worth bragging about on the Lucifer track “My Babe.” One of his favorite love songs is Smog‘s “To Be of Use,” an aching, complex ballad from 1997’s Red Apple Falls. As Daniel put it, “now that’s a love song!”

Another of Smog’s songs, “Held” from 1999’s Knock Knock, kicks off Lucifer on the Sofa (it used to be a favorite in Spoon’s live shows in the early 2000s). Reflecting on the fact that the song is now over two decades old led to a discussion of what a more modern version of classic rock could be. Though Daniel tends to think of the classic rock era as the 1960s through the ’80s, he acknowledged that Nirvana‘s Nevermind is approaching “classic rock status.” If he was programming a classic rock radio station of the future, he’d include tracks by the Strokes (The New Abnormal was another album in heavy rotation while Spoon were making Lucifer on the Sofa), Wilco, the Black Keys, Jack White, and Pavement, whose “Range Life” from 1994’s Crooked Rain, Crooked Rain bridges the gap between rock’s golden era and the rumpled sound of peak ’90s indie rock.

Despite the album’s emphasis on rock’s traditions, neither Lucifer on the Sofa nor Daniel are stuck in the past. Some of his newer favorite acts include Idles, Bodega, and Tropical Fuck Storm. Of the latter band’s leader Gareth Liddiard, Daniel said, “he can write about anything.” On “Bumma Sanger” from last year’s Deep States, Liddiard transforms watching weird TV commercials and being on the dole into a brash collision of post-punk and psych.

With omnivorous musical taste like Daniel’s, it’s no wonder that Spoon are still revealing new facets to their style three decades into their career — and if there’s any justice, we’ll hear them on the classic rock radio of the future, too.