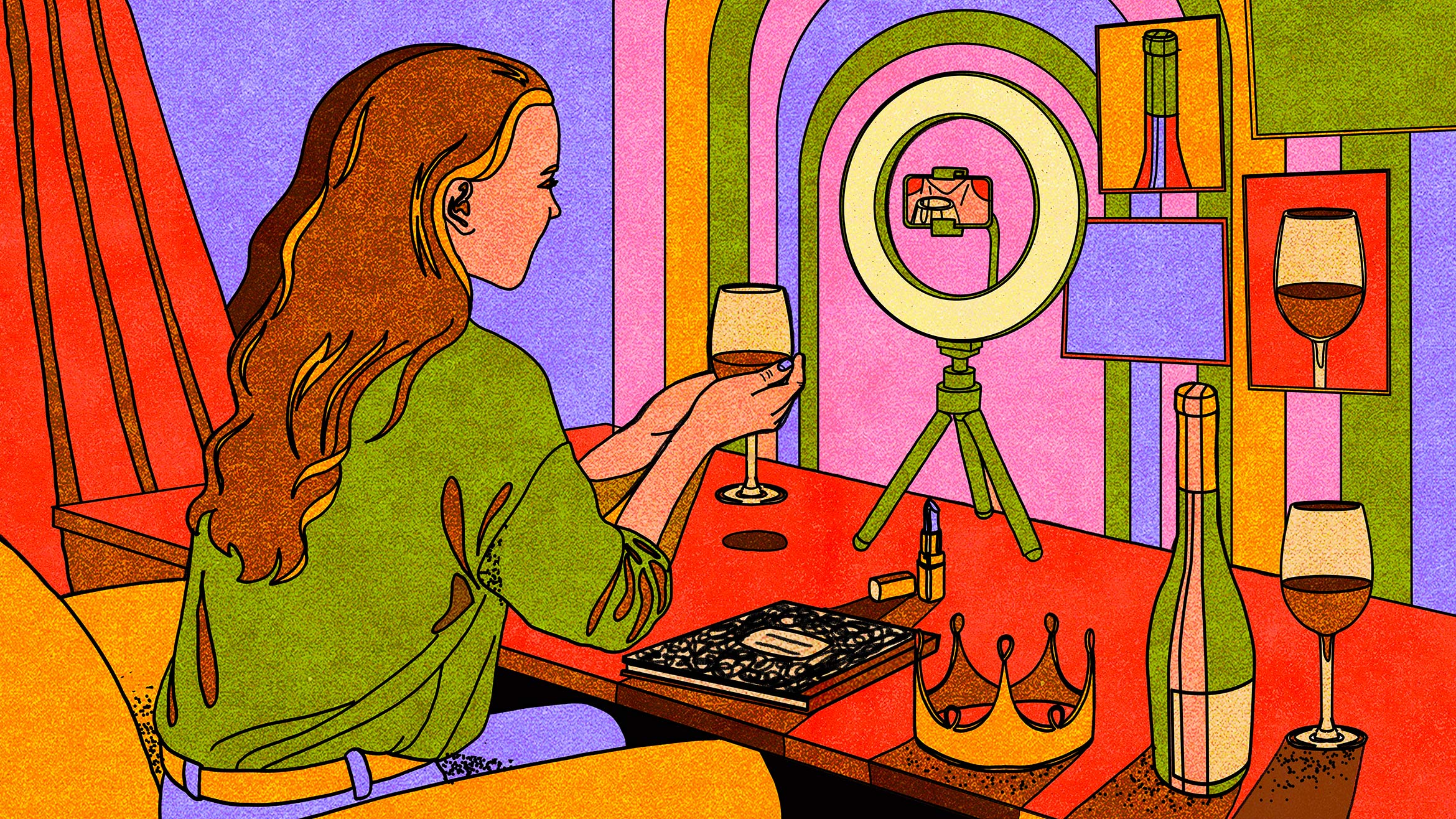 To stand out on the internet in 2013—a time after everyone joined social media, but before monoculture was pronounced dead—one had to be loud. Bright, bokeh background photos of lip glosses and AriZona iced tea cans were doing numbers on Tumblr; Billboard’s Top 100 was packed with high-volume, high-sincerity chart-toppers, from the anthemic (fun.’s “Some Nights”) to the explosive (Imagine Dragons’ “Radioactive”); and the most searched-for cocktail on Google that year, the Aviation, sported an unexpected violet. On YouTube, the algorithm supported an aesthetic that fit squarely within what YouTuber Shelby Church dubbed the “Saturation Era.”

The aesthetic—a pre-millennial-pink fever dream splashed with magenta and turbocharged cyan—defined YouTube’s wildly popular back-to-school videos, from locker DIY tutorials to school lunch ideas to room tours. The PG content and attendant aesthetic became a fast track to success on the platform—so much so that influencers who were years outside of the school-age demographic began making those videos, too.

“I know that a lot of YouTubers who kind of branded themselves as ‘back-to-school girls’ definitely struggled with sharing their adult personalities [and] having to cater their channel to a 15-year-old age demographic,” says Lindsey Hughes, who has been on the platform since 2010, when she herself was 15.

There was also a monetary benefit to acting younger: YouTube was becoming a viable career for some, supported by advertising that prioritized kid-friendly content and brand sponsors who wanted their ambassadors to behave in a certain way. Travel YouTuber Damon Dominique, who features more mature content in his videos, has encountered such pressures. On his 27th birthday, his manager urged him to take down a photo of himself with a shot glass because a brand felt it didn’t align with their values. “I found it funny to remind them I was 27,” says Dominique.

Fast-forward to today’s internet, where the candid and unedited reigns, and the growing “Truth or Drink” format feels right at home. In these videos, the same YouTubers who were playing kid versions of themselves a decade ago answer viewer-submitted questions about things they’ve previously never spoken about, including their experiences partying, their dating lives and what happened behind the scenes in their early days on YouTube. If they choose not to answer a question, they take a shot.

While “Truth or Drink” has been around since at least 2015, the early videos came from a professional production company, Cut, which was less vulnerable to the personal scrutiny and targeted vitriol that followed independent creators. “My channel became such a little kid’s channel without even intending to,” confesses YouTuber Alisha McDonald in a video about her growth on the platform. Now, her video series is arguably the archetype of the “Truth or Drink” rubric. In the series, she invites her YouTube contemporaries—women who also gained a following making youthful videos—to join her in spilling secrets over shots of tequila.

Similarly, Dominique’s “Red Wine Talks” series, a European cousin to “Truth or Drink,” stars him and other young creatives discussing relationships, politics and philosophy while drinking wine. Of his nine different series—mostly travel documentaries and vignettes of life in Paris—“It’s the one that seems to resonate with people the most,” he says.

Amanda Gordon, a video essayist who analyzes internet and social media trends, explains that the new content feels more authentic, which is what viewers now crave. “It would be different for a TV show host who hosts a kids show. That’s your job; that’s not weird that you’re talking to preschoolers,” she says. “But it is weird when a 25-year-old is acting like she’s about to go back to junior year of high school.” Confirming Gordon’s analysis, in the comments of one of Hughes’ “Truth or Drink” videos from the early days of the pandemic in 2020, fans wrote, “Loving the adult content. Now I don’t feel as awkward watching as a 30-year-old,” and “I’m drunk and alone and this made me feel like I’m being included.”

In an article about millennials’ shifting drinking habits, Amanda Mull writes that though the desire to drink may be lessening for the generation, alcohol may have an even bigger and longer-lasting effect on millennial social lives. Influencers built their brands on relatability and parasocial relationships with their audiences. If an average American millennial feels the pressure to have a glass of wine on a date, then it follows that a YouTuber would probably feel more comfortable spilling secrets while drunk. Ultimately, the self-censorship is by no means over; Hughes now has a Patreon where she shares extra content, such as behind-the-scenes clips that had to be cut from her “Truth or Drink” videos for fear of being demonetized. In a way, it’s openness in spite of the potential backlash—using alcohol as both the content itself and the social lubricant—that keeps the trend alive.

“I would feel like I’m only doing a big disservice to myself if I’m not open about my life,” says Dominique. “That’s quite literally the point of lifestyle YouTube channels.”

Get our freshest features and recipes weekly.