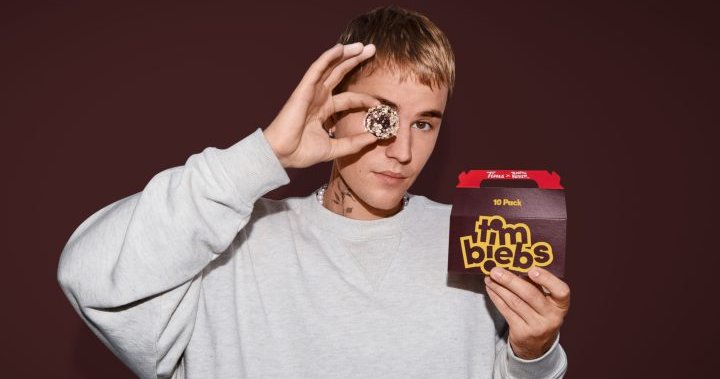 The celebrity endorsement deal marks a departure from the coffee and doughnut chain’s usual lineup of professional hockey players, a marketing strategy that could attract new customers.

“It helps them appeal to a younger demographic, which is something they desperately need to do,” said retail analyst Bruce Winder. “Justin Bieber is a good opportunity to connect with Gen Z and young millennials.”

It could also help Tim Hortons build brand awareness in the United States, where the restaurant faces stiff competition from chains like Dunkin’ Donuts and Starbucks.

“The U.S. is a very crowded coffee market and Tim Hortons has struggled down there,” Winder said. “Justin Bieber is massively popular in the U.S., so this could help them.”

The partnership aligns with the Canadian singer’s frequent social media posts about the restaurant, which have ranged from snapshots of a holiday-themed Tims cup to complaints about a new lid.

The Stratford, Ont.-raised performer has shared posts as far back as a decade ago about missing Tim Hortons while travelling outside Canada.

Hope Bagozzi, chief marketing officer for Tim Hortons, said his “genuine love and engagement” with the brand made the collaboration authentic.

“Justin is so fervent in how much he loves Tims,” Bagozzi said in an interview. “That is the perfect recipe for a collaboration. It’s not forced.”

While hockey will “always be part of our DNA,” she said the celebrity partnership with Bieber will help reach new customers.

“It opens us up to a different audience and a different conversation beyond just hockey,” Bagozzi said. “Justin has wide appeal, but definitely does appeal to younger guests.”

Nabbing Bieber — one of the best-selling music artists of all time — represents a major coup for the chain.

But it’s not the first time Tim Hortons has collaborated with a Canadian musician.

In 2019, the company teamed up with Pickering, Ont., singer-songwriter Shawn Mendes ahead of his sold-out stadium show in Toronto that September. The campaign, themed Home is Where the Heart, included limited edition cups.

Read more:
Justin Bieber, The Weeknd displeased with the Grammys — for different reasons

The genesis of Tim Hortons’ collaboration with Justin Bieber started just a few months later. The superstar waded into a heated debate over Tim Hortons’ lid redesign by launching a poll on his Instagram account in December 2019.

“That was the start of a conversation,” Bagozzi said. “He was quite keen to do something with us, so it’s been almost two years in the making.”

She declined to comment on the cost of the collaboration, but called it a “worthwhile investment.”

The partnership comes at a time when many musicians have gone months with being able to tour or perform to large crowds.

While retail expert Winder said Bieber has likely lost revenue due to pandemic restrictions preventing large shows, he pointed out that the singer just released an album in March.

“One could argue that Tim Hortons may have had to fork out more because Justin Bieber is a much bigger and more mainstream star,” he said. “But he has so much money from his success, I don’t think this is really a money thing for him. He’s getting paid, but the motivation might be more that it pulls at his heartstrings and reminds him about where he grew up.”

The Timbiebs launch is being accompanied by two television commercials, in English and French, that feature the pop star brainstorming new Timbit flavours in an office boardroom.

“We probably started with about 100 possibilities,” Bagozzi said. “We would send him samples to try and he was very specific on what he liked and didn’t like. It was months in the making to land on these three flavours.”

Tim Hortons will roll out the limited-edition Timbiebs Timbits in chocolate white fudge, sour cream chocolate chip, and birthday cake waffle on Nov. 29, exclusively in Canada and the United States.

The restaurant will also have three merchandise items for sale, with more details expected in the coming weeks.