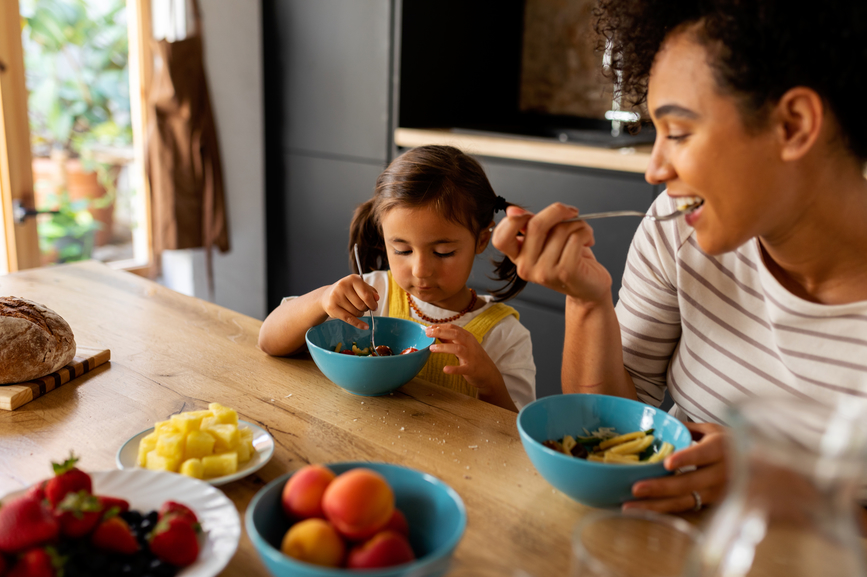 
If there’s anything that mimics the greek mythological creature known as the “Hydra,” it’s diet culture—whenever a brave hero slices off one head, numerous grow back in its place. For people trying to better their relationships with their bodies and food, it can feel like a Sisyphean struggle to push against societal norms that want you to look a certain way, weigh a certain amount, and internalize any number of attitudes or moral beliefs about foods. It’s hard to wade the waters of information online, but some eating disorder (ED) specialized dietitian tips for talking to kids about food could be a helpful place to start.

Fostering a positive and beneficial relationship with both food and your body is not easy in a world of face filters, cosmetic surgery trends, and the sneaky way that diet culture can morph and alter itself into new, seemingly positive trends with each passing year. And yet, despite what the multi-billion dollar diet product industry wants you to believe, there absolutely is a way to foster a beautiful, stable, and sustaining relationship with food and your body. It’s absolutely possible—just sometimes not so easy.

One of the best ways to encourage and cultivate positive food and body image values is to begin in childhood. This is because many folks end up having a harder time with these topics specifically because of the messages they were taught as children about these things. Sometimes, though, it can be helpful to have a chance to break down why certain statements about food aren’t helpful when trying to promote a healthy relationship with eating and cooking.

The thing about diet culture is that no one is inherently immune to it. Some folks can pass down less than helpful messages about food with the intention of trying to educate their kids about nutrition.

To that end, we tapped an expert who specializes in this exact topic—i.e. speaking to kids about eating in a way that promotes a positive relationship with their body and with food—to break down some common statements about food and why she’d never say them to children. Here, Rachel Larkey, MS, RD, CDN, CLC, a registered dietitian who focuses on disordered eating (and serves as the dietary manager for a hospitalization program for eating disorders in Bellevue, WA) shares what messaging to avoid at all costs.

“When we place moral value on food, we lose sight of the many varying reasons we eat—nutrition, culture, celebration, comfort, taste, pleasure, and so on—and the many wonderful things food gives to us, even when it doesn’t fit the societal definition of ‘healthy’, which is often based in a whitewashed and reductive version of nutritional science anyway,” says Larkey. “This messaging sets the stage for kids to believe that foods are inherently ‘good’ or ‘bad,’ which can be the first step into they themselves feeling ‘good’ or ‘bad’ for eating a specific food.”

A way to reframe this would simply be by offering other options. If your child is asking for a cupcake for breakfast and you’d really rather them not have a sugar crash at 10 a.m., try, “A cupcake isn’t on the menu today. What would you like from these other options?” (Then you can list several things you’d like them to try). If your child is asking if a food is “good” or “bad,” this is a great time to talk about the many reasons why we eat food outside of nutrition and how food is neutral, Larkey adds.

Aside from the relatively obvious implications this could have, it’s worth stating because people do say this to children, adolescents, and other adults. “When we signal to kids that we’re surveilling their bodies, especially in the context of what they eat, it sends the messages that a) being in a larger body is wrong, and b) that food and their choices with food are why their body is changing, and c) that weight gain is bad and should be avoided,” says Larkey.

In her practice, Larkey explains that folks who have grown up hearing comments about their body changing often feel self-conscious about their bodies, feel ashamed about or fearful of gaining weight, and restrict many foods in order to stay a certain size (even to the detriment of their health), and sometimes develop eating disorders. When considering how to reframe this sentiment, Larkey doesn’t offer another option because it’s best not to comment on someone’s weight negatively at all.

3. “You’re so gorgeous/beautiful/pretty!” (without other praise)

While appearance-based compliments are alright when used sparingly, Larkey explains that it’s very common for children who are assigned female at birth to receive compliments that are overwhelmingly about their physical appearance or beauty above their other attributes. She adds that this can signal to them that their worth is based on their appearance or their ability to fit within a narrow margin of what is considered “beautiful” by society, which typically includes being petite and thin.

“I’ve had many patients who have received compliments their entire lives on their beauty and thinness. If and when their bodies change, this can cause some serious distress—it’s hard to figure out where your self-worth lies if it’s only ever been tied into your looks,” says Larkey. “This can contribute to the development of an eating disorder or to feelings of low self-esteem.”

Non-appearance-based compliments can foster a sense of self-esteem and self-worth that isn’t rooted in one’s appearance. Compliments like this could be anything related to skills, intelligence, tenacity, bravery, problem-solving, humor, and strength.

4. “You have to clear your plate before you can leave the table.”

“Kids are born as naturally intuitive eaters. They usually hear their bodily cues for hunger, satiety, and comfort quite well,” says Larkey. “When we push kids to finish all the food on their plate despite being full, it can send the message that they should ignore their hunger and fullness cues, and it gets them more disconnected from their body.”

Larkey explains that when she sees clients who were told this, they often have challenges with guilt around wasting food, eating past fullness, and guilt about overeating as well. “Sometimes this can cause compensatory behaviors like purging, over-exercising, or restriction to ‘make up’ for eating too much,” says Larkey.

According to Larkey, encouraging kids to get and stay connected to their body’s cues is a great alternative to this. When a child wants to leave the table without eating or without eating everything on their plate, it could be for a lot of reasons. Asking them to pause and reflect with questions like, “What are you feeling right now?” or “How is your body telling you that you’re full?” is a great way to encourage reflection and listening to their body’s cues, she says.

“The phrasing of this signals to kids that it’s a negative to take more of something or to eat a specific type of food,” says Larkey. “It adds to the idea that certain foods are good or bad, and that there is a specific portion they ‘should’ be eating.” In reality, she says that the amount (and type) of foods we need differ not only from person to person, but even in the same person from day to day.

This sentiment can make folks fearful to eat in front of others and isolate themselves during meal times to avoid judgment, Larkey explains. It can also lead to a negative association with wanting seconds, even if you’re hungry, and this can lead to restriction or feelings of guilt and shame when they do take or want more food.

“There’s no ideal reframe for this sentiment,” says Larkey. “Instead, you can trust that your kids’ bodies can tell them how much to eat.” She recommends that you provide the foods you’re hoping they will have if you can, and allow them to choose what they will eat and how much. If you’re not sure about how to encourage intuitive eating in children, that’s definitely okay, but there are some useful resources out there with more information, like Ellyn Satter’s guide for parents and children.

6. Any negative comments about your own body

“Last but certainly not least, kids are like sponges,” says Larkey. “So often, parents are their kids’ heroes and best friends. Their body is home to their favorite person, and it’s distressing for them to hear that they hate it. They’re always listening to what we say, and they emulate it. If they hear us say, ‘wow, my stomach looks awful,’ or ‘god, I’m getting so fat,’ it teaches them to hate their bodies, to hate or fear fatness in general, and it signals to them that there are ‘good’ bodies, there are ‘bad’ bodies, and that they should carefully scrutinize their own bodies.”

This is one of the most common things Larkey says that she hears from clients. “It’s normal—we’re all people growing up in a society that has rigid beauty standards, so it makes sense that we might unconsciously say things about our own bodies based on what we ourselves have learned,” she says.

What to remember about these dietitian tips for kids

Many of Larkey’s clients learned at a young age that their bodies were “wrong” by observing their parents pick apart their own bodies. “This is especially true for my clients who are in larger bodies than their parents—hearing this commentary can lead to thoughts like, ‘Well, if they hate their body for its size, and I’m bigger, I should definitely hate mine,'” Larkey says.

Larkey recommends catching yourself, if you’re able, and redirecting. For example, you could say, “I noticed I just made a really mean comment about myself, and that’s not okay. All bodies are great, and I am practicing loving mine more. Next time I’m going to say: ____.”

“‘You can also try saying nice things about your body, like “I’m so glad my strong legs get me to so many fun places with you!'” Larkey adds.

Parenting is unique, challenging, messy, exhausting, and personal. Larkey stresses that you’re not a bad parent if you’ve said any or all of these things to your kids. Everyone is doing their best with the tools they have, and sometimes those are things we were passed down from our parents or grandparents. Larkey stresses that it’s never too late to start teaching kids about food neutrality and body diversity. There’s a lot of shaming in the parenting world, but you’re doing a great job just by trying to learn more—and these dietitian tips for kids can help you along the way.