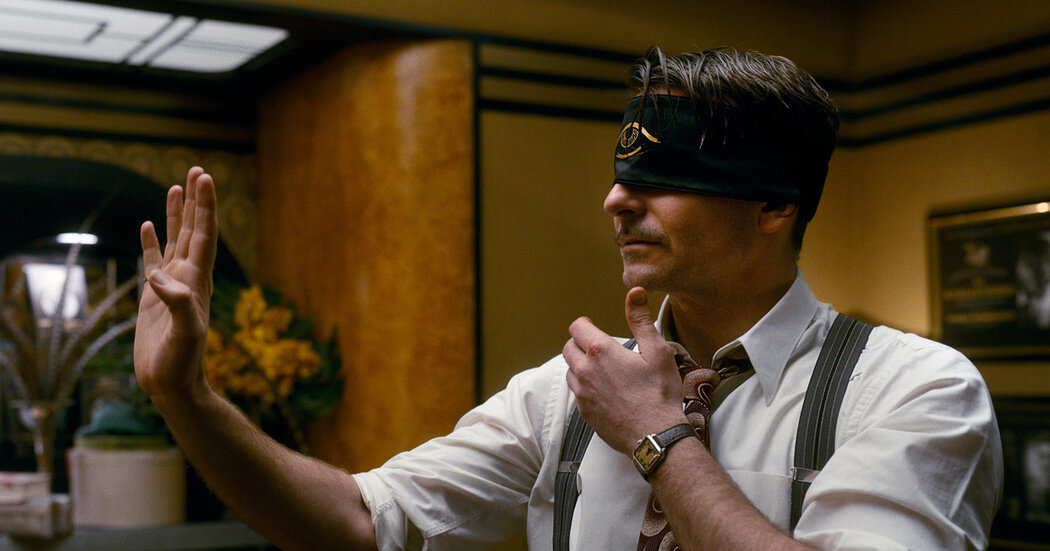 
Vintage watch designs are integral to the dark and twisted plot of “Nightmare Alley,” a new film version opening next week in the United States that, much like its 1947 predecessor, has lots of moody film noir ambience.

The story follows a group of carnival workers into a glamorous world that a few — like Stanton Carlisle, played by Bradley Cooper — manage to penetrate. He is a drifter who rises from a carny adept at sleight-of-hand to a charming charlatan, and he eventually cons the wrong people.

The first wristwatch in the film sets the post-Depression mood. “Stanton wears his father’s watch from the very beginning of the film,” Christopher Geggie, the movie’s property master, said in a recent phone interview. “It’s an old watch that was once a good watch, and it is possibly the only thing of real value to the character.”

The watch — chosen by Mr. Cooper, with the approval of the director, Guillermo del Toro — is a 14-karat gold Hamilton Hastings, a style introduced in 1928 (quite different from the watches that Mr. Cooper has worn as an IWC Schaffhausen watch ambassador since 2018).

Authenticity is crucial, Mr. Geggie said, but vintage watches like the Hastings have their own set of challenges when it comes to moviemaking.

“The thing about watches from this era is that they were much smaller, and so it can be challenging to find a watch that looks correct to our modern eyes,” said Mr. Geggie, referring to the model’s squarish dimensions of 27 millimeters by 34 millimeters. “This Hamilton watch was a pretty good size for an old watch. It looked right on Bradley’s wrist.”

And when shooting a movie, any number of things could go wrong so a backup is always needed — the horological version, in a way, of a body double.

“As a property master, I only offer things that I can get more of, since we always need to have doubles, or even triples, of many items,” he said. “For example, with an old watch, maybe a crystal falls out. This type of thing is common, especially with vintage items. It’s necessary to have another one right there on set to fly in, as we say. We had three versions of Bradley’s watch. We had two heroes, and one stunt version that was very similar.”

A “hero” is movie-speak for a prop that plays a significant role in the film — and, yes, often worn by the hero — and a “super hero” intended for close-up shots. In addition to Mr. Cooper’s watch, there were three or four versions — heroes and stunt versions — for the watches worn by Cate Blanchett and Rooney Mara, who play two of the women in Stanton’s life.

Ms. Blanchett’s character, the femme fatale psychologist who Stanton becomes involved with as the plot spirals toward its noirish ending, wears a gold-plated Circa CT101TL watch, a new copy of a timepiece from the late 1930s. The men’s model was chosen, Mr. Geggie said, because the 23-karat gold case is 27 millimeters by 23 millimeters and would be more visible than the petite women’s watches of that era — and more in line with the character’s ultrachic glamour.

And Ms. Mara’s character, Molly, the young woman from the carnival who adores Stanton and becomes his partner in crime, wears a Lady Hamilton Vintage Quartz, a contemporary ladies’ watch with antique flair that also becomes a pivotal plot device.

“Rooney’s character ties a watch onto a steering wheel when planning a getaway, and it’s a Hamilton watch that the company still makes,” said Mr. Geggie, who was prop master on several films directed by Mr. del Toro and for “Chicago.” “Hamilton loaned us a number of those modern watches, which happen to look exactly like the old ones.”

The Swiss brand Hamilton, part of the Swatch Group, has an outsize reputation when it comes to moviemaking. The brand says its models have appeared in more than 500 movies, including all four “Men in Black” films and the 2015 Matt Damon vehicle “The Martian.” It has said it does not pay product placement fees.

“The similarities between watchmaking and moviemaking might not be immediately apparent,” Vivian Stauffer, Hamilton International chief executive, wrote in an email, “but when it comes to telling a story and telling the time, the connection becomes clear — it’s all in the details.”

Also pivotal to the “Nightmare Alley” plot is a pocket watch, part of a hoax by Stanton and Molly that involves a wealthy judge and his grief over a dead college sweetheart. It is a pocket watch, brand unknown, thought to date from around the late 19th century, but the props crew was unable to locate a duplicate.

“I couldn’t double the pocket watch, but we only used it in two scenes: during a séance and when the judge pulls it out to reference the previous scene,” Mr. Geggie said. “We had it gold-plated to look newer, since pocket watches are all usually over 100 years old. But then we had to make it look newer, for the time period of the film, between 1939 to 1941.”

One detail that proved helpful: The pocket watch and Mr. Cooper’s Hamilton watch did not work — a godsend for a movie crew.

“We never want movie watches to work on a movie set unless we want to make them go ‘tick, tick, tick,’” Mr. Geggie said. “The rest of the time we want them not to work because when we shoot a scene, we want to set the watch for, say, 2:10 for every take we need. If the watch works, you have to go back and change the time again for each take. This drives us all insane.”

The first film adaptation of “Nightmare Alley,” in 1947, somewhat softened the harsh ending of the novel by William Lindsay Gresham, reportedly at the insistence of Darryl F. Zanuck, a 20th Century Fox executive. It was not a hit for Zanuck or its leading man, Tyrone Power, but is now considered among the great films noirs.

Mr. del Toro, however, has said his movie is more true to the grimness of the novel — and his passion for the project, and all its detail, seems to have rubbed off.

“Guillermo always says that everything in a movie matters,” Mr. Geggie said. “When you see a movie like this, a whole lot of time goes into making everything look old. It helps to create the illusion of everything blending together in a fake reality.”

And every fine detail of that false world has a purpose and helps propel the story, he added.

“Everything has to look like it’s from the same period, including wardrobe, jewelry and watches,” he said. “You might think it’s just a watch, but it isn’t. There’s a whole story behind it.”