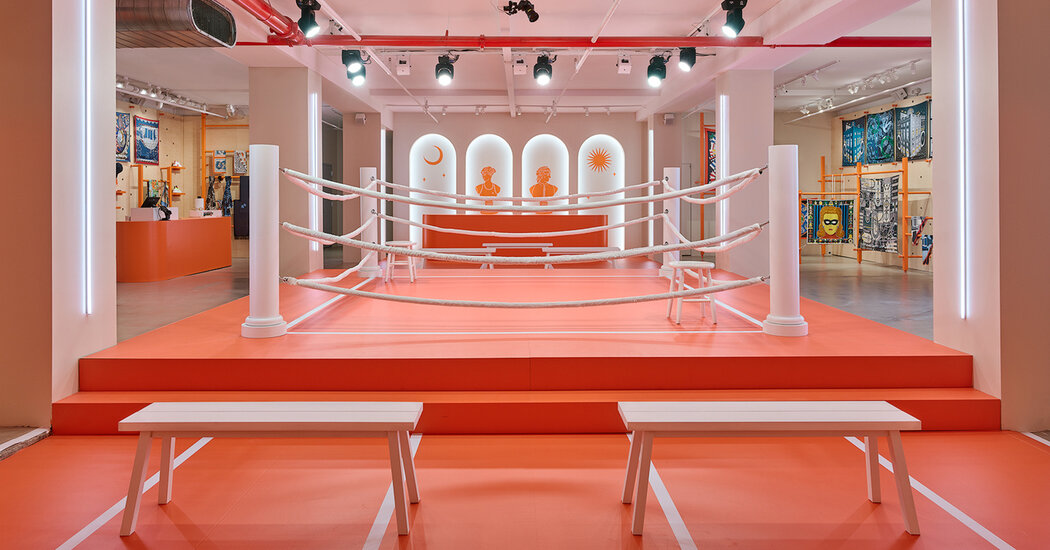 
Welcome to the T List, a newsletter from the editors of T Magazine. Each week, we share things we’re eating, wearing, listening to or coveting now. Sign up here to find us in your inbox every Wednesday. And you can always reach us at [email protected].

The first thing I do in the morning is apply Votary Super Seed Cleansing Oil and use a Rose Quartz Beauty Restorer gua sha tool from Hayo’u — I learned how to do gua sha from tutorials with Katie Brindle during lockdown. Then I put on Skin Reset serum from Emma Lewisham and the Calming Face and Neck Moisturizer from Sodashi. If I’ve got time I’ll do qigong for 20 minutes; it’s a Chinese practice of going through a series of poses connected to different organs in the body and increasing the energy there. All of our fragrances are based on the emotions they trigger; I pick mine according to what mood I want to evoke that day. I’ve been wearing I Am Verdant a lot — it feels like a zap of energy — and Magnetic 70; it’s quite masculine and strong. Our Ember candle and incense, which is smoky and woodsy and has birch and frankincense, is about clearing negative energy. I don’t wear much makeup; maybe Secret Camouflage concealer from Laura Mercier under my eyes. Looking after my skin with facials is more my focus. I’ve had the same facialist, Vaishali, here in London, for 15 years. My Infrared Sauna Blanket is the best thing I’ve ever bought — every time I get a bit sick, I feel better after using it. When you’ve got curly hair, it’s a whole thing. If it’s really frizzy I use Olaplex No. 6 Bond Smoother and wash with a Purology Hydrate Shampoo and Dizziak Deep Conditioner that smooths it out. If it’s a bit ratty after a few days and I don’t want to wet it, I spray Bumble & Bumble Curl Reactivator. I love a nighttime bath, and because I’m Australian and the smell of eucalyptus oil is nostalgic to me, I’ll sprinkle it in the water. Or I’ll put in the tiniest drop of Olverum’s Bath Oil, and my entire house will smell of it. I found this incredible exfoliating mitt at a pharmacy in West London that is much stronger than anything else I’ve tried. I’m very loyal to In Fiore, and their Fleur Vibrante is my magic potion. I love their body oils too. I go to bed smelling like a bouquet of flowers.

Lilya Turki, a Swiss-Tunisian creative director, and her husband, Antonio Fazio, a Swiss-Italian designer, began collecting ceramics over a decade ago, visiting markets and dealers all over the world. Largely confined to their Brooklyn Heights apartment during the pandemic, they finally had time to take stock of the 600-plus pieces they’d amassed, and set about cleaning, restoring and photographing each item. Soon after, they launched Archyvio, an online shop and database of one-of-a-kind finds, including a rare Gio Ponti ceramic cat, 1950s Gunnar Nylund vases and a square Signe Persson-Melin teapot. The site is searchable primarily by color, an interface that was important to the couple, who now live back in Switzerland. “It was more emotional this way,” says Turki. “We wanted to start the conversation with something simple.” From $135, archyvio.com.

Turning the Treadmill Into a Runway

Workout wear may have come a long way since the days of headbands and leg warmers, but Hermès is taking the idea of looking good mid-sweat to another level this week with HermèsFit, its bespoke pop-up gym in Williamsburg, Brooklyn. From Nov. 4 to 7, the French luxury house will offer a series of free workout classes during which guests can try out and try on some of its most iconic accessories. During daylight hours there will be yoga sessions with poses involving scarves, kickboxing classes for those sporting enamel bangles and lessons on stretch techniques using leather belts. At night a boxing ring painted signature Hermès orange will transform into a stage for live performances and D.J. sets. And for those who can’t bear to part with their props afterward, an on-site shop will offer a selection of the brand’s latest beauty products and accessories. Fitness bookings at hermes.com.

Wines for the Golden Hour

Childhood friends Marianne Fabre-Lanvin and Thomas Delaude grew up surrounded by sun and sea on family vineyards in the South of France, so it’s no surprise that their eventual collaboration — a three-bottle wine collection called Souleil Vin de Bonté — incarnates a certain elemental joie de vivre. All three blends — labeled simply Le Rouge, Le Rosé and Le Blanc — now available Stateside, are accessibly priced, food-friendly organic wines ideally enjoyed as aperitifs paired with rustic finger foods: Le Rouge with chorizo and kalamata olives, say, or Le Rosé with tinned sardines. The pair also share a passion for ocean conservation, and a portion of the proceeds will go to the 5 Minute Foundation. Says Fabre-Lanvin: “We wanted to say that you can entertain and be a bit of a bon vivant while doing good.” From $14, convivewines.com.

Fashion is largely focused on what’s next, so for fashion designer and filmmaker Tom Ford to cast a retrospective look at his career in his latest book as he approached his 60th birthday was a rare, “cathartic” experience, he says. Whereas “Tom Ford,” released in 2004, charted his time at Gucci and YSL, “Tom Ford 002,” which will be released on Nov. 10, focuses on his eponymous brand, launched in 2005, along with his venture into filmmaking with the Academy Award-nominated “A Single Man” and “Nocturnal Animals.” True to Fordian form, the book is a glamorous affair, with glossy photos of everyone from Timothée Chalamet to Michelle Obama wearing the designer’s pieces. Meanwhile, an interview with fashion critic Bridget Foley illuminates Ford’s inner world, including his relationships with his son, Jack, and husband of 35 years, Richard Buckley, who passed away in September and to whom, along with Jack, the book is dedicated. $135, tomford.com.

Cooler temperatures are finally here, and it’s time to stock up on fall wardrobe staples like oversize coats, statement boots and, last but not least, a Fair Isle sweater. The après-ski standby, whose familiar patterns connote instant coziness, has been migrating to runways of late, popping up in myriad fall collections. Weekend Max Mara and Valentino offer classic renditions with the shoulder-to-shoulder pattern right below the neckline; Tory Sport follows suit, but with a turtleneck for added warmth. Paco Rabanne’s fitted silhouette and Stine Goya’s balloon sleeves temper the ruggedness with feminine touches. And both Balenciaga’s distressed fabric and MM6 Maison Margiela’s high neck and long sleeves push the sleepy classic in more alternative directions.