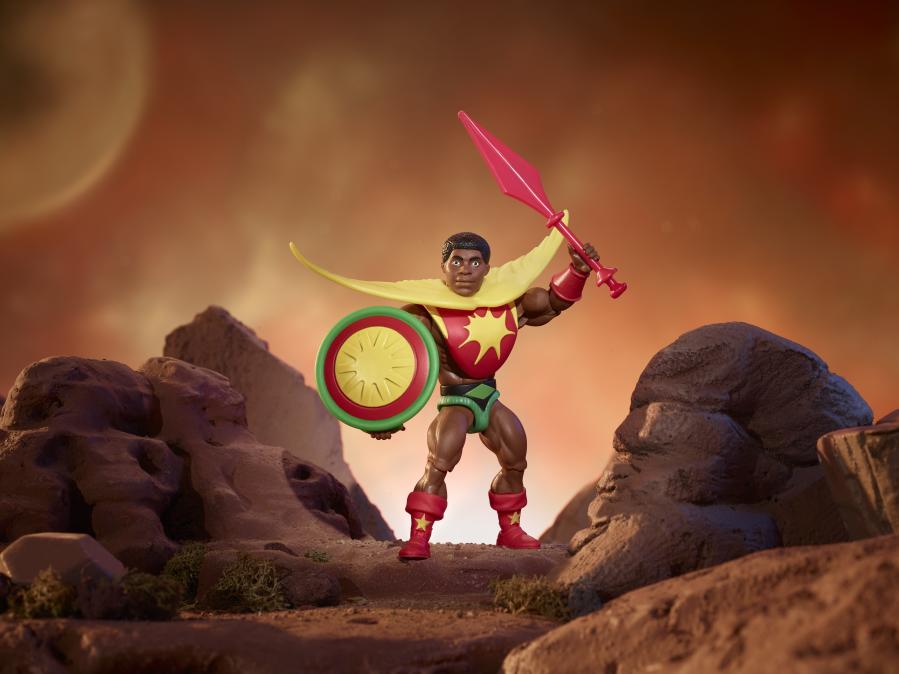 
He-Man may have the power of Grayskull, but only Sun-Man can harness the power of the sun. The groundbreaking Black action figure — which first hit toy store shelves in 1985 from Olmec Toys — is officially joining forces with Mattel’s vintage toy line in time for the 40th anniversary of Masters of the Universe. Sun-Man will be featured in multiple MOTU toy lines throughout 2022, including Masters of the Universe Origins and Masters of the Universe: Masterverse. And don’t be surprised if he eventually appears alongside He-Man in some of the many animated series, and maybe even the upcoming live action feature film, that star Eternia’s champion.

For his creator, Yla Eason, the pairing fulfills her longtime goal of creating a diverse action figure sandbox for kids of all backgrounds to play in. “It was conscious decision of ours to make Sun-Man fit into play with He-Man,” Eason tells Yahoo Entertainment about the flagship character in her groundbreaking Rulers of the Sun toy line. “You could open up the package, put him on the ground with all the other Masters of the Universe characters and he’d fit right in. I think that’s what Mattel is acknowledging: It’s a diverse culture here. Let’s bring this diverse group of characters into the He-Man universe and let them all play together.”

As Eason explains, Sun-Man’s origin story is directly connected to her own family’s history. When Mattel’s animated Masters of the Universe series premiered in the early 1980s, her three-year-old son was one of the millions of children who followed He-Man’s onscreen exploits. But when the TV was switched off, he never thought to act those adventures out in real life. “My son said he couldn’t be He-Man, because he wasn’t white,” Eason remembers. “He looked at He-Man and didn’t see anyone that looked like him.”

What really concerned Eason is that her son had apparently arrived at that conclusion by himself. “Our family is predominantly Black, and we lived in Brooklyn. [The] neighborhood at the time was mostly Black, so I don’t think there was anybody telling him he couldn’t be He-Man because of his skin color,” she says. “He was just smart enough at three years old to realize that no one in the Masters of the Universe line looked like him, and he came to the unfortunate conclusion that it wasn’t meant for him. And if you have decided [as a child] that your color is a limitation to anything — especially imaginary play — that’s frightening.”

At first, Eason and her husband promised their son that they’d find Black action figures to spark his playful imagination. “He actually looked at us like he was skeptical,” she says of his wise beyond his years reaction. “Maybe he already knew that they were not out there.” That’s a lesson that Eason herself quickly learned when she started researching the mid-’80s toy landscape and saw just how monochrome it really was. “All of his friends played with Masters of the Universe, Tonka trucks and Lego — that was it. There were no characters of other ethnicities.”

Enter Sun-Man. Eason credits a formative meeting with Dr. Kenneth Clark — a psychologist who, along with his wife, Mamie, served as expert witnesses for the Supreme Court’s landmark Brown v. Board of Education decision — as the final piece of the puzzle that transformed her from a toy buyer into a toymaker. “What Dr. Clark showed me is that children will feel that they are important if there is something that looks like them in a particular role.”

It’s no accident that Sun-Man’s name is a play on “son.” But Eason says the choice of name goes beyond the person she had in mind when creating the super-buff superhero. “I asked myself: ‘What makes our skin brown? And why do people from the equator and other parts of the Earth that’s closer to the sun have darker skin?’ It’s the melanin: Melanin is a way to protect your skin from the sun, and the sun is what makes you browner. So it was a combination of understanding that and also wanting Sun-Man’s powers to come from his skin, since that was what my son had perceived was his limitation. The fact that his brownness both protects him and gives him his energy and life force is very deliberate.”

Once Sun-Man was in place, Eason and her Olmec Toys collaborators built a diverse Rulers of the Sun cast around him, including Latino tech expert, Digitino, and the telekinetic Ninja, Space Sumo, both of which will also be receiving Mattel makeovers this year. Following Sun-Man’s 1985 introduction, the Masters of the Universe franchise notably welcomed its first Black hero, Clamp Champ, in 1986, but Eason says that the Rulers of the Sun continued to stand apart. “There was no other character like Sun-Man, with his powers and his look,” she notes. “It wasn’t a copycat product.”

Still, creating a toy line is only half the battle: The other half is getting your figures on shelves and into kids’s hands. Eason recalls a specific instance where she discovered the challenges — and prejudices — she was up against.

“I would go to Toys “R” Us at different malls and just watch people come by and see what they were saying about Sun-Man,” she recalls. “I remember this one little white boy really wanted Sun-Man, and his mother discouraged and distracted him. She said, ‘Let’s go over there and get this other toy.’ I could see that it bothered her, which just shows the power of toys and representation. I guess she was thinking: ‘We are not bringing that little Black toy into our house.'”

Fortunately, Eason has seen those attitudes change significantly as Sun-Man and his fellow Rulers of the Sun are poised to return to stores bigger and better than ever. “Nowadays, it’s a totally different environment in that people recognize there are many different colors and different cultures. And if you want your children to be successful in the future, then you are teaching them to accept other cultures.”

In fact, When Mattel released a special limited edition Sun-Man as part of the collector-focused Mattel Creations line last year, the figure quickly disappeared from virtual shelves. “I’m getting nothing but love,” she says of the social media reaction to Sun-Man’s renewed time in the sunlight. “Maybe the haters are hiding! What I’ve heard from fans is that they feel like the toy was very well crafted. They loved the colors, and they loved that there’s nothing else like it.”

As for Eason’s own child, her now-adult son has long since outgrown his Masters of the Universe phase. But she’s thrilled that Sun-Man’s return will help a new generation of children feel comfortable in their own skin. “Sun-Man is a fantastical superhero and that’s how he’s going to remain so kids will see him as powerful and that also makes them feel like they are powerful,” she says. “That’s really the wonderful part of the reintroduction of his legacy under Mattel.”

Sun-Man and other Rulers of the Sun figures will join the Masters of the Universe toy line in 2022.