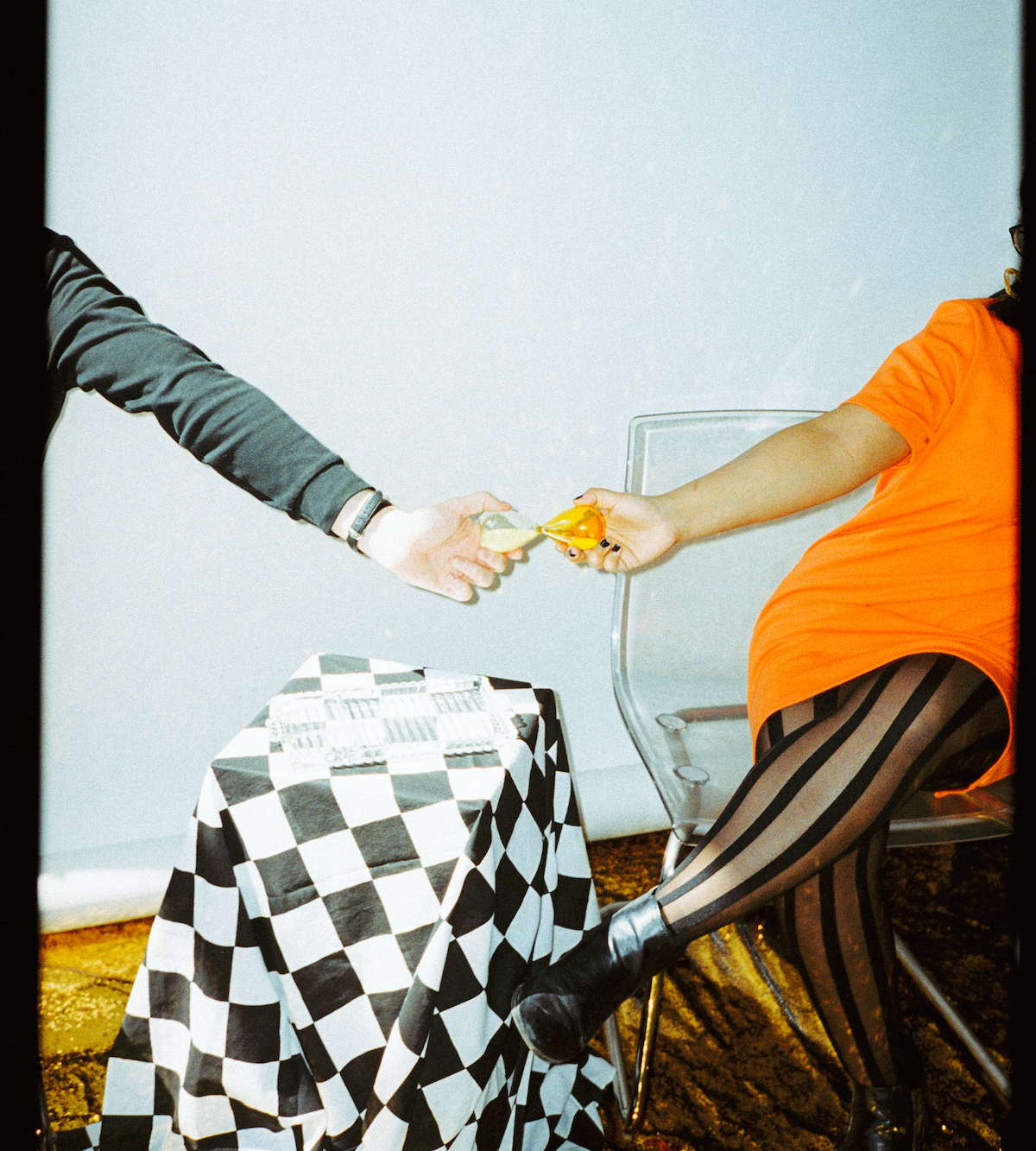 
Still, there were some natural limits placed on Sweeping Promises’ debut: Schnug and Mondal recorded the record in a converted laboratory at Harvard, where Schnug is a “late stage” PhD candidate. (“Academia feeds the Virgo beast,” he added by way of explanation.) The 40-foot ceilings meant that their songs had to be intentional: “The capacious architecture and the reverb that results from [that space] forces you to play sparsely, because everything that you play resounds monumentally,” Schnug explained. “I think a lot of the minimalism of the songwriting is due in large part to not wanting to oversaturate,” Mondal added. “Or have too many ideas that cancel each other out vibrationally.”

Recorded with a single-mic technique, their songs feel perfectly lived in: The buoyant bass on “Safer Now” and “Blue” buzzes with a palpable liveness while still resounding with a crisp remove. And then there’s Mondal’s voice, halfway between Cindy Wilson’s disaffected bark and lush “wall of sound” girl group harmonies. Her louder, bolder vocals came from realizing that she could just write “the parts of songs that I always loved singing really loud at the top of my lungs in the cars” for herself. But it’s a taxing performance: “The first thing I thought of when we were in Chicago is, ‘Boy, I hope my voice teacher doesn’t show up because she would hate what I’m doing with my voice,’” Mondal added. Still, she relies on vocal warmups and breath techniques before live shows to help with vocal endurance.

During the pandemic, they temporarily moved in with Schnug’s parents in Austin, where they recorded their newest single “Pain Without A Touch,” released domestically on Feel It Records and on Sub Pop in the rest of the world. In a rare exception to their 20-minute rule, the song’s combination of restless lyrics and jaunty guitar melodies came from revisiting an abandoned songwriting effort. It was one of “30 or 40” songs they’d written in the past year; returning to it months later, the band realized it could work with new lyrics. They sat down and recorded it, stream-of-consciously, in Schnug’s bathroom, isolated from the rest of the sounds in the family home. There are nine other yet-to-be-released songs from what they’ve dubbed the “Bathroom Sessions,” but Schnug insists “that will not be the [second] album.”

The songs that comprise the next LP, they say, will be recordings from “non-toilet-encompassing rooms.” Schnug and Mondal recently relocated to Lawrence, Kansas, after nearly buying a church in Ohio. Their new home is almost tailor-made for a band that thrives off self-recording: a house with an attached studio. “It’s all wood floors, high ceilings, tons of reverb,” Mondal said. “It kind of sounds like the space that we had in Cambridge.” But even now, with a proper recording space, it doesn’t seem likely that they’ll ditch their straightforward audio preferences. “There’s a directness in our ability to write with each other that we really can’t afford to capture any less spontaneously,” Mondal explained. To them, recording in mono and capturing sounds with minimal equipment is a conscious effort to make an active choice based on the material realities of indie musicians — to “try to regain some sort of control in the face of a really uncontrollable life situation for everyone who isn’t in the 1%,” Mondal said. “There’s this sort of central idea of oneness,” she added. “We’re just standing up in the face of noise or reverb.”