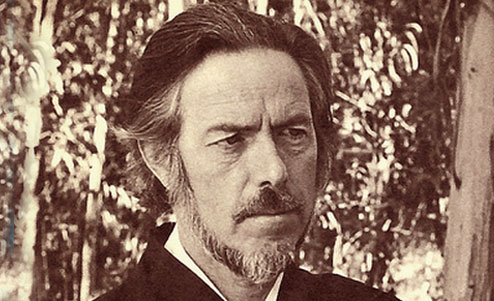 “My name, ‘Alan,’ means ‘harmony’ in Celtic and ‘hound’ in Anglo-Saxon. Accordingly, my existence is, and has been, a paradox, or better, a coincidence of opposites.”

Zen Buddhism is full of paradoxes: practical, yet mystical; seriously formal, yet shot through with jokes and plays on words; stressing intricate ceremonial rules and communal practices, yet just as often brought to life by “wild fox” masters who flout all convention. Such a Zen master was Alan Watts, the teacher, writer, philosopher, priest, and calligrapher who embraced contradiction and paradox in all its forms.

Watts was a natural contrarian, becoming a Buddhist at 15 — at least partly in opposition to the fundamentalist Protestantism of his mother — then, in the 1940s, ordaining as an Episcopal Priest. Though he left the priesthood in 1950, he would continue to write and teach on both Buddhism and Christianity, seeking to reconcile the traditions and succeeding in ways that offended leaders of neither religion. His book of theology, Behold the Spirit, “was widely hailed in Christian circles,” David Guy writes at Tricycle magazine. “One Episcopal reviewer said it would ‘prove to be one of the half dozen most significant books on religion in the twentieth century.’”

As a Buddhist, Watts has come in for criticism for his use of psychedelics, addiction to alcohol, and unorthodox practices. Yet his wisdom received the stamp of approval from Shunryu Suzuki, the Japanese Zen teacher often credited with bringing formal Japanese Zen practice to American students. Suzuki called Watts “a great bodhisattva” and died with a staff Watts had given him in hand. Watts didn’t stay long in any institution because he “just didn’t want his practice to be about jumping through other people’s hoops or being put in their boxes,” writes a friend, David Chadwick, in a recent tribute. Nonetheless, he remained a powerful catalyst for others who discovered spiritual practices that spoke to them more authentically than anything they’d known.

Watts, a self-described trickster, “saw the true emptiness of all things,” said Suzuki’s American successor Richard Baker in a eulogy — “the multiplicities and absurdities to the Great Universal Personality and Play.” It was his contrarian streak that made him the ideal interpreter of esoteric Indian, Chinese, and Japanese religious ideas for young Americans in the 1950s and 60s who were questioning the dogmas of their parents but lacked the language with which to do so. Watts was a serious scholar, though he never finished a university degree, and he built bridges between East and West with wit, erudition, irreverence, and awe.

Many of Watts’ first devotees got their introduction to him through his volunteer radio broadcasts on Berkeley’s KPFA. You can hear several of those talks at KPFA’s site, which currently hosts a “Greatest Hits Collection” of Watts’ talks. In addition to his 1957 book The Way of Zen, these wonderfully meandering lectures helped introduce the emerging counterculture to Buddhism, Taoism, Hinduism, forgotten mystical aspects of Christianity, and the Jungian ideas that often tied them all together.

No matter the tradition Watts found himself discussing on his broadcasts, listeners found him turning back to paradox. Hear him do so in talks on the “Fundamentals of Buddhism” (top), and other talks like the “Spiritual Odyssey of Aldous Huxley,” the “Reconciliation of Opposites” and a talk entitled “Way Beyond the West,” also the name of his lecture series, more of which you can find at KPFA’s “Greatest Hits” collection here.