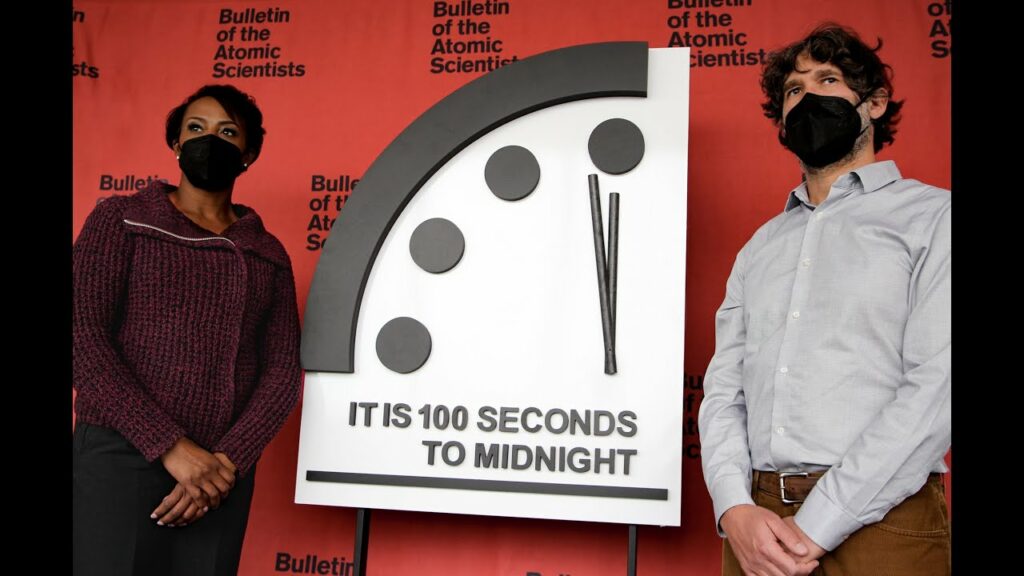 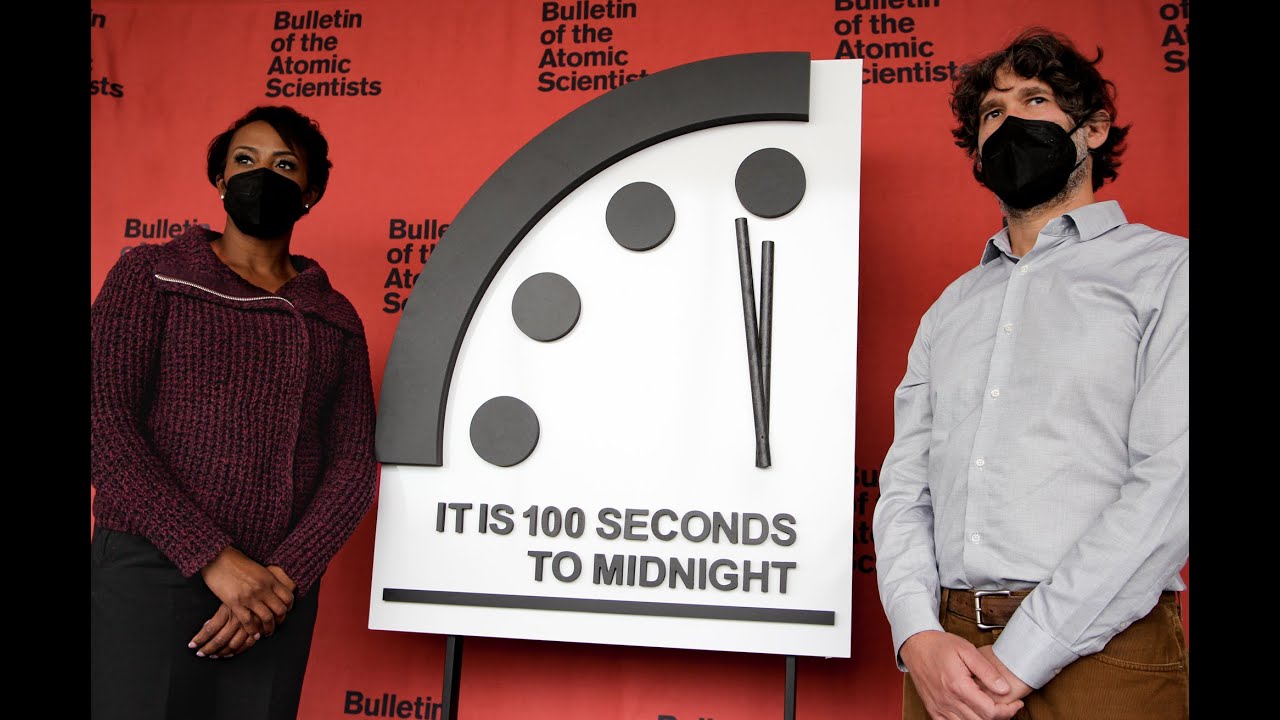 Image via The Bulletin of the Atomic Scientists

Last year, the fates handed the New York Times‘ Maria Cramer an enviably striking lede: “Humanity is 100 seconds away from total annihilation. Again.” That we all know immediately what she was writing about speaks to the power of graphic design. Specifically, it speaks to the power of graphic design as practiced by Martyl Langsdorf, who happened to be married to ex-Manhattan Project physicist Alexander Langsdorf. This connection got her the gig of creating a cover for the June 1947 issue of the Bulletin of the Atomic Scientists. She came up with a simple image: the upper-left corner of a clock, its hands at seven minutes to midnight.

Asked later why she set the clock to that time in particular, Langsdorf explained that “it looked good to my eye.” That quote appears in a post at the Bulletin addressing frequently asked questions about what’s now known as the Doomsday Clock, “a design that warns the public about how close we are to destroying our world with dangerous technologies of our own making. It is a metaphor, a reminder of the perils we must address if we are to survive on the planet.” In the 75 years since its introduction, its minute hand has been moved backward eight times and forward sixteen times; currently it still stands where Cramer reported it as having remained last January, at 100 seconds to midnight.

To the public of 1947, “midnight” signified above all the prospect of humanity’s self-destruction through the use of nuclear weapons. But as technology itself has advanced and proliferated, the means of auto-annihilation have grown more diverse. This year’s Doomsday Clock statement cites not just nukes but carbon emissions, infectious diseases, and “internet-enabled misinformation and disinformation.” Earlier this month, the Bulletin reminded us that even as 2022 began, “we called out Ukraine as a potential flashpoint in an increasingly tense international security landscape. For many years, we and others have warned that the most likely way nuclear weapons might be used is through an unwanted or unintended escalation from a conventional conflict.”

Now that “Russia’s invasion of Ukraine has brought this nightmare scenario to life,” many have found themselves glancing nervously at the Doomsday Clock once again. This also happened after the election of Donald Trump, which prompted the Vox video above on the Clock’s history and purpose. Its iconic status, as celebrated in the new book The Doomsday Clock at 75, has long outlasted the Cold War, but the device itself isn’t without its critics. Bulletin co-founder Eugene Rabinowitch once articulated the latter as meant “to preserve civilization by scaring men into rationality,” a somewhat controversial intention. One could also raise objections to using an inherently linear and unidirectional concept like time to represent a probability resulting from human action. Yet somehow more technically suitable images — “100 centimeters from the edge,” say — don’t have quite the same ring.

19th-Century Skeleton Alarm Clock Reminded People Daily of the Shortness of Life: An Introduction to the Memento Mori

J. Robert Oppenheimer Explains How He Recited a Line from Bhagavad Gita — “Now I Am Become Death, the Destroyer of Worlds” — Upon Witnessing the First Nuclear Explosion

The Night Ed Sullivan Scared a Nation with the Apocalyptic Animated Short, A Short Vision (1956)

Protect and Survive: 1970s British Instructional Films on How to Live Through a Nuclear Attack

How Clocks Changed Humanity Forever, Making Us Masters and Slaves of Time