John Lennon. Hunter S. Thompson. Kurt Cobain. What do they all have in common? Well, aside from the fact that all three of them were routinely on enough uppers, downers, screamers and laughers to knock out an elephant, one key detail unites them: their sunglasses. They didn’t just look cool in them, they were iconic.

Throughout history, certain famous faces wound up so heavily linked to the style of shades they hid behind that the glasses became a part of their visual identity. So much so that if someone was to pop a pair of white, acetate-framed Christian Roths on a watermelon and ask you who it looked like, you’d probably reply ‘oh, it’s the guy out of Nirvana’.

But there’s another reason vintage sunglasses are so sought after, too. “They were simply made better,” says Morris. “They used higher quality, heavier acetate, hand-made components and glass as opposed to plastic lenses.” This robustness meant that there was a time when sunglasses literally felt different. “As an example you need to compare modern, Luxottica-produced Ray-Ban with original Bausch & Lomb American-made Ray-Ban,” Morris continues. “There really is a massive gulf.”

Unfortunately, most of us aren’t in a financial position to procure a pair of original 1950s aviators. Which is why we’ve rounded up some of the best sunglasses from history along with who they’d suit, how to wear them and a few similar, modern styles to suit every budget, from baller to beach bum. It’s no secret that former president Kennedy liked to sport a pair of pristine, tortoiseshell Wayfarers on the regular. What’s somewhat lesser known is that they were never actually Wayfarers at all.

The Saratoga from American Optical was JFK’s eyewear of choice, and one of the most iconic frames ever to have graced a presidential face. The company doesn’t make them any more but you style and shape have, unsurprisingly, become common amongst other sunglasses brands.

This shape is something of a hybrid. It’s angular, yet has rounded elements – a unique combination that makes it one of the only styles capable of working perfectly across the whole spectrum of face shapes. Round, oval, square, triangle, hexagon – whatever your bone structure, this frame is a failsafe option.

If you’re really committing to the whole JFK thing then a navy blue or charcoal grey tailored suit is the only way to go. But the Saratoga shape is far from one-trick pony. Paired with a simple T-shirt and jeans it makes a highly versatile everyday option. In 1993, photographer Jesse Frohman snapped Nirvana frontman Kurt Cobain in a series of portraits. He was wearing a pair of white, round-framed sunglasses. These shots went on to become some of the most memorable images of the grunge pioneer, immortalising his Christian Roth shades and spurring countless imitations for decades to come.

You don’t have to be a professional stylist nor an eyewear connoisseur to realise that this frame is not one for the faint of heart. The pronounced, round shape will work best for guys with oval, square or heart-shaped faces but the most important factor in pulling off a style this brash is to wear it with total balls-out confidence à la Cobain. You can leave the floral blouse at home though.

Bold, acetate-framed shades are a statement piece. Which means unless you’re Iris Apfel (which let’s face it, you probably aren’t) the rest of your outfit should be simple and stripped back. Let the sunglasses do the talking. Or “do the shouting” might be more apt in this case. The instantly recognisable, round, wire-framed specs of every aging hippy’s favourite Beatle should really need no introduction. Lennon’s trademark glasses are each and every bit as famous as his music and the style became an integral part of the fashion landscape throughout the 1970s.

The first thing you’ll notice about the style is that it is unapologetically round. That means if you struggle to hit the bowling alley without someone trying to stick their fingers up your nose and fling you down a lane, these are probably not the shades for you. If you have more of an angular face, like Lennon himself, go wild.

Unless you’re deliberately going full hipster, wire-framed specs are probably best left in the past. Instead opt for a round frame but in acetate or thicker metal instead. Try black with tailoring, transparent for the weekend, or, for a versatile option that’ll go with both, stick to tortoiseshell for best results. With their light havana frame, folding design and crystal blue lenses, Steve McQueen’s Persol 714s were instantly recognisable in a sea of similar, 60s silhouettes. They were catapulted into the spotlight after McQueen wore them in The Thomas Crown Affair and pairs from his personal collection have been known to sell for as much as $70,000.

The sloping brow and curved edges mean this style works best for those with square or rectangular faces. Although they’ll still look great on rounder face shapes too as the keyhole design maintains an angular element.

In the film that made them famous, McQueen wore his 714s with both a checked, three-piece suit and a Harrington jacket with knitwear and chinos. They may be 50 years old but these are still two solid looks that would make street style photographers weak at the knees today. From setting boats ablaze while high on psilocybin to having his ashes fired out of a cannon by Johnny Depp, gonzo-journalism founder Hunter S. Thomson’s life was anything but normal. With that in mind, it stands to reason that his chosen eyewear would be out of the ordinary, too. And the tinted Ray-Ban Shooters for which he became known fitted the bill perfectly

This style of frame extends quite far down the face. If you’re not blessed with high cheekbones, aviator-style shades like these should be given a wide berth as they can make the face look droopy. Aside from that you’re good to go.

With some serious self-assuredness. As with the Cobain-style glasses above, these eye-catching specs can’t be pulled off if you have any reservations about whether or not you look good in them. Wear them boldly, unashamedly and preferably with your best Hawaiian shirt. 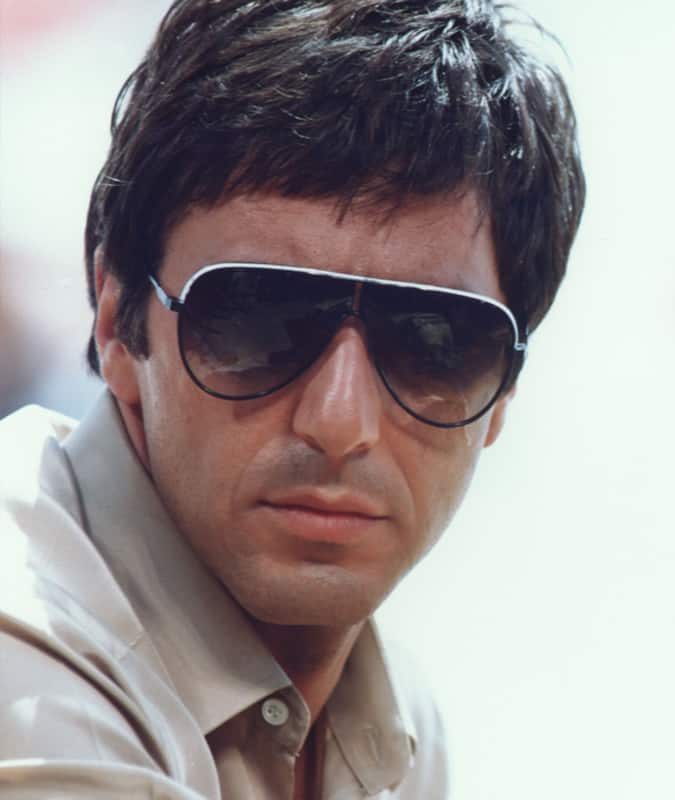 Suffice to say there was no shortage of sunglasses in Tony Montana’s collection. However, the pair that every eyewear enthusiast dreams of getting their hands on is the Linda Farrow 6031s that came to define the opulent 1980s style of Miami’s most ruthless drug lord. As far as iconic movie shades go it doesn’t get much better than this.

Thankfully, you don’t need to be a hardened criminal in order to pull off a pair of sunnies similar to Montana’s. This frame is an aviator style, which means it will look great across the majority of face shapes. However, as mentioned earlier, if those cheekbones aren’t on point, you may be better off opting for something that sits a little higher up the face instead.

For the full 1980s Miami look, par this style with a Cuban collar shirt, light chinos or white jeans and top things of with a pair of brown Derby shoes or tassel loafers. 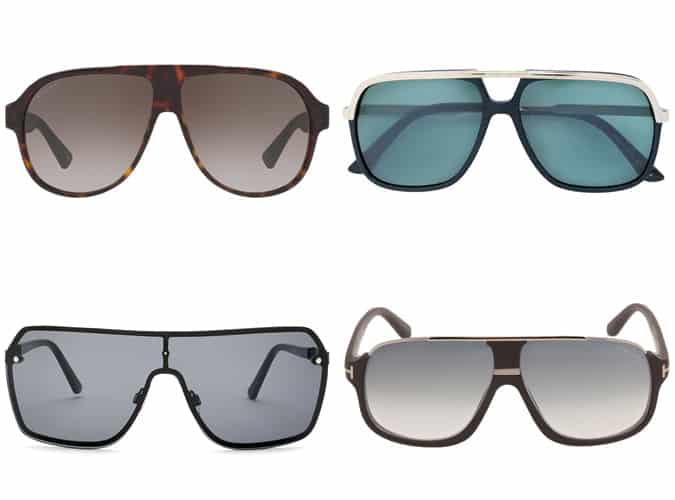