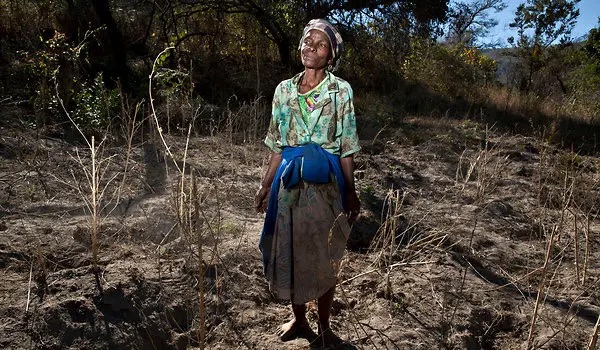 
CANNABIS CULTURE –  Rural grandmas in Swaziland risk arrest to grow, harvest, and trade cannabis because they have no other means with which to feed the orphans left behind by the raging HIV-Aids crisis.

In 2012, rural grandmothers in poverty-stricken Swaziland earned global goodwill and sympathy when the New York Times famously presented them as: ‘Grandmas grow gold in Swaziland.’

Today, cannabis cultivation has been legalized in South Africa – the country that surrounds the tiny Kingdom of Swaziland and is the largest market for the famous ‘Swazi Gold’ strain of cannabis. Legalization in South Africa, contrasted with criminalization in Swaziland is throwing Swaziland’s enterprising grandmas into a precarious situation, they say.

Legalization in the key market of neighboring South Africa is whipping cannabis grandmas like Gogo Dlamini into a two-fold way, they say.

This is the same cry that has emerged in neighboring South Africa where Indigenous Black cannabis growers have held street protests alleging legalization and licenses have gone largely to corporate white companies leaving small-scale Black growers on the border of criminalization.

Illegal cannabis is a lifeline

Growing cannabis under the table is a key revenue to buy food, medicines, and schooling in Swaziland, a place where formal jobs are severely limited, and traditional cash crops that are not cannabis have already been walloped by poor global prices. For example, the Swaziland government Annual Vulnerability Monitoring Report 2005, revealed cotton prices have slumped due to global competition.

So, this leaves cannabis hanging as a crucial source of income for Indigenous growers.

‘Because of the HIV crisis, many Swaziland families comprise of five extra children, orphans left behind by the deceased. To feed family orphans, cannabis is our lifeline,“ Gogo Sizakele Khumalo, 55, who says a kilogram of lucrative ‘Swazi gold’ cannabis strain fetches $5 in neighboring South Africa.

South Africa’s legalization is killing the cash cow market of Swaziland grandmas like Khumalo and Dlamini.

‘We are at wits-end,’ Khumalo says. ‘Few buyers want to take our harvest to South Africa anymore because they say good quality cannabis is now easily available in South Africa due to their legalization. For the few buyers who agree to buy the grandma’s cannabis, prices have collapsed to an average of $2 per kilogram in the last two years. South Africa legalized cannabis cultivation in 2018 and it has moved rapidly to become Africa’s leading grower, ramping up financing, bringing in tech to nurture high-value cannabis fit for overseas medicinal cannabis markets, and even foraying into neighboring countries like Lesotho and cornering markets there.

This is a classic case of the law of unintended consequences whereby if a product becomes legal, unregistered artisanal producers get whipped off by corporate players, says Swaziland trade unionist Sipho Maseko of the All Swaziland Grassroots Livelihood Union.

The phenomenon of legalizing cannabis has taken root in South Africa and Lesotho, countries that border Swaziland, and all signs point to Swaziland soon liberalizing cannabis cultivation too.

Growing and possessing cannabis is illegal in Swaziland under the country’s colonial-era Opium and Habit Forming Drugs Act of 1922, says Daniel Moloi, a Swaziland human rights lawyer. However, Swaziland is warming up to legalization and has already made tentative steps towards that direction: giving a 10-year lease in 2019 to Profile Solutions, an American firm, to operate a processing plant and grow medical cannabis and hemp for the niche medical market.

‘The thing that we fear is soon becoming a reality,’ says Gadi Mabopane, secretary of the Native Swaziland Cannabis Growers, a union representing the interests of the country’s unlicensed cannabis growers. The Native Swaziland Cannabis Growers are lobbying the Swaziland monarchy and government to make sure that if legalization occurs, 50% of cultivation farmland will be reserved for formerly unregistered growers like the grandmas who already dabble in cannabis under the table.

‘The moment cannabis gets the green light in Swaziland, I tell you big corporations from South Africa will snap up farmlands. The grandmas who already grow cannabis for decades will be forced to become farm laborers, and abandon their small family cannabis plots,’ Mabopane says.

In June 2018, the King of Swaziland brought to life the country’s Prevention of Organized Crime Act and it was gazetted into law. One of its main targets is the native cannabis growers, like Grandmother Khumalo. Police raids of cannabis fields whereby herbicides are sprayed on budding crops, have tripled, says Swaziland Cannabis Association chair Saladin Magagula.

The motive of creeping legalization and ring-fencing the market is to help giant foreign cannabis corporations that are snapping up licenses to grow medicinal cannabis in Swaziland and kick out the competition of Indigenous small-scale growers. For example, Stem Holdings, an American company, announced in 2019 that it had obtained ‘ preliminary approval to become the only licensed growing farm and processing plant for medical cannabis and industrial hemp in The Kingdom of eSwatini for a minimum of 10 years. The corporation would be ‘the exclusive exporter within eSwatini for hemp and medical cannabis worldwide’.

‘It’s an unfair deal that benefits American cannabis corporations and lines the pocket Swaziland Royal family but criminalizes old grandmothers who have grown cannabis for decades. That’s the cost of corporate-led legalization of cannabis in Swaziland,’ summed Sipho Maseko, the cannabis trade unionist.