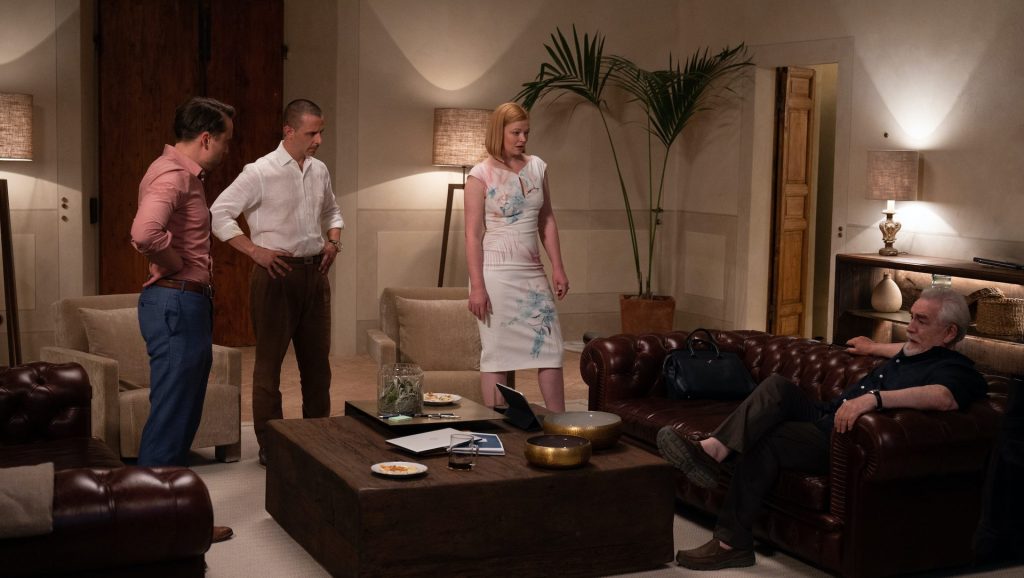 
Warning: The following interview contains spoilers about the season 3 finale of HBO‘s Succession, “All the Bells Say”

These crazy, fighting Roys! When does it all stop? Just when Kendall, Shiv and Roman kissed and made up, and joined arms against papa boss Logan, the blunt acerbic patriarch and megalomaniac has the upper hand in what appears to be his selling his conglom Waystar Royco to tech titan Lukas Matsson (Alexander Skarsgard) of GoJo in what is a fierce tee-off for season 4. We already spoke with Matthew Macfadyen about how Tom turned against his in-laws, and sided with Logan. Now here’s Succession creator, writer, EP Jesse Armstrong to break down what happened last night.

Can you tell us about the different posters for season 3? Twitter-verse was abuzz saying how the poster was a big reveal in tipping off how Tom would be on team Logan.

There was a bunch of versions. The pitch of the season when I talked about to the writers, ‘civil war’ was always there, and that’s some of the ideas HBO played with. We’re super collaborative between HBO and those departments, but we didn’t have a ‘let’s put out a number of posters and one of them will be the answer.’ They’re insider-y, but we didn’t write those posters in the room.

Did you always know that there was going to be a twist with Tom at the start of the season? Also, Mark Mylod in a BTS Succession bit talks about how hard it was to end the season; referring to how he finally settled on Shiv.

He was talking about and importantly how we ended the episode. We knew the action that would take place, but the order in which the material was revealed and the final moment was made by Mark, camera operators, the actors and in the edit. Last season, we ended on Logan’s face. This season it was explicit whose face we’d end up on. [Editor’s note: And that was Shiv].

This is very risky of Tom to do. You can’t trust Logan. Outside of Greg on Tom’s side, he has no connection to the new company.

With that being trick-sy, I have some thoughts on that and I’ll hit my fellow writers in the room when we start cranking up. I don’t want to short-circuit anything. I hear what you say. If you were saying that in the writers’ room, I’d respect that — and I can see that logic. It’s not necessarily the end of the story.

When do you start breaking story and when are you hoping to go into production on season 4?

We will get the room going again after Christmas in January, I hope, and then we’ll see how long the season should be and how that makes everything in play down the line.

Do you have a finite ending in store for Succession? Do you see this lasting five, six or seven seasons? Or do you take it one season at a time?

A bit of both. I have a pitch for where and how I think we end. It’s not immutable in respect to my colleagues, we’ll chat about it and how many seasons that plays out over. Similarly I have a pitch, I don’t want to say in public as it will take away a little bit of the fun and I want to check in with all the important people around the show to see if we all feel the same.

Is there a world in which there’s bliss for the siblings? Where Logan isn’t micro-managing everything, where each of them are fulfilled and empowered in a way and it’s just them bickering and dealing with another problem?

I think — we follow some iron rules of the show which are to try and make it feel close to the truth of a media organization of this size and structure and the psychology of people like this, and the people we created. But within that, I’d refer you again to the writers’ room — I would never exclude a possibility such as that. Yeah, the world is an extraordinary thing and I would never exclude a possibility like that given where they’ve come from, it sounds like it might be a stretch. But lots of things are a stretch. The way I approach the show is to test those hypothesis against reality and where they are, without making too early firm decisions.

Will GoJo finally take Waystar into the streaming future?

GoJo is expected to have a better use of user tech.

I always feel like Wayster is about to buy or merge with MySpace, similar to how News Corp misstepped.

Time Warner-AOL, there’s been lots of tie-ups between tech and media; maybe this will be a happy one.

Can we expect some sort of divorce Shiv & Tom? I mean this is bad.

This is bad, but it’s not smart for me to speculate about the stuff that will be turned into subsequent episodes. I don’t know.

While Matthew Macfadyen was aware of what was going on with Tom this season very early on, how did the rest of the cast respond when they learned?

When we did the read-through (they were briefed). It’s all acting, but they weren’t surprised on the day. We shot that scene, it was a long scene, over a couple of days. But it felt pretty electric in the room so they managed to rekindle that surprise, which I hope you’re feeling resonates.