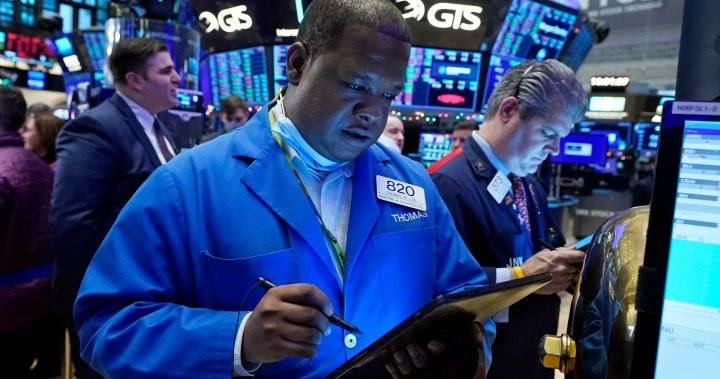 
Wall Street’s main indexes dropped more than one per cent on Monday in a broad selloff as investors worried about a deluge in COVID-19 cases potentially undercutting the economic rebound and a critical blow to President Joe Biden’s domestic investment bill.

All major S&P 500 sectors were lower as coronavirus cases surged in New York City and around the United States over the weekend, dashing hopes for a more normal holiday season. Britain’s leader said he would take more steps to slow the spread of the Omicron coronavirus variant if needed, after the Netherlands began a fourth lockdown and as other European nations considered restrictions.

“Typically what happens in Europe is a bit of a preview for what we see in the United States. So, if we see a lot more infections in the U.S., it could stress hospitals, make people less reluctant to get out, spend and partake in the economy. That’s definitely a cause of concern,” said Chris Zaccarelli, chief investment officer at Independent Advisor Alliance.

Canadian economy came roaring back in Q3, but economists wary of Omicron impact

The benchmark S&P 500 traded below its 50-day moving average, a key technical level.

Economically sensitive S&P 500 groups such as financials and materials were among the biggest sector decliners.

The Canadian dollar traded for 77.18 cents US compared with 77.85 cents US on Friday.

The February crude contract was down four cents at US$66.65 per barrel and the January natural gas contract was up a penny at US$3.87 per mmBTU.

In a further knock to market sentiment, U.S. Senator Joe Manchin said on Sunday he would not support Biden’s $1.75 trillion domestic investment bill.

The developments came as the Federal Reserve decided last week to end its pandemic-era stimulus faster, with the central bank signaling at least three quarter-percentage-point interest rate hikes by the end of 2022.

The S&P 500 was now logging a loss for the month of December. Investors have taken a more defensive stance so far this month, with sectors such as consumer staples, real estate and utilities leading gains.

“Given the strength of the market so far this year, in some ways you could see investors take some profits and look for greater clarity in the new year,” said Michael Arone, chief investment strategist at State Street Global Advisors.

In company news, Oracle Corp shares fell 4.5 per cent after the business software maker said it would buy electronic medical records company Cerner Corp for $28.3 billion. Shares of Cerner added about one per cent.

Declining issues outnumbered advancing ones on the NYSE by a 5.25-to-1 ratio; on Nasdaq, a 3.56-to-1 ratio favored decliners.

With files from the Canadian Press