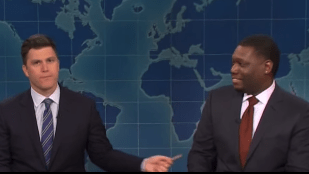 
Tonight on SNL, Weekend Update‘s anchors covered topics ranging from the end of Britney Spears’ conservatorship, to developments in the feud between Vin Diesel and Dwayne Johnson, to an interesting new business venture on the part of DJ Khaled.

“A judge on Friday officially ended Britney Spears’ conservatorship after 13 years,” co-anchor Michael Che said to cheers from the in-house audience. “The media is very excited that she’s back on her feet, so they can knock her right back down again.”

Jost later noted that “in an effort to end his long-standing feud with Dwayne Johnson, Vin Diesel posted an open letter on Instagram. Of course, for Vin Diesel, an open letter is just a C.”

Jost followed up that joke with one about DJ Khaled, who recently announced a new chicken wing delivery service that will use jet skis to offer boatside chicken service. “Khaled said he came up with the idea with help from his longtime business partner, cocaine,” he said.

Later on Update, Jost noted that SNL is now six shows into its new season, welcoming new cast member Sarah Sherman to the desk to give her take on how it’s going.

“What’s not to love? Laughing, comedy, New York City,” said Sherman. “But I’m not going to lie, dude. I’ve got some feedback, and I’ve got a lot of questions about this show. First of all, why is it live?”

Sherman also wondered, why is the show on so late? “It’s not even Saturday even more, it’s Sunday,” she deadpanned. “You people are being lied to.”

Also stopping by was robot stand-up comic Laughintosh 3000 (Aristotle Athari), who appeared under the guise of discussing companies’ use of artificial intelligence in artistic pursuits, but ultimately just told sad jokes at his own expense.