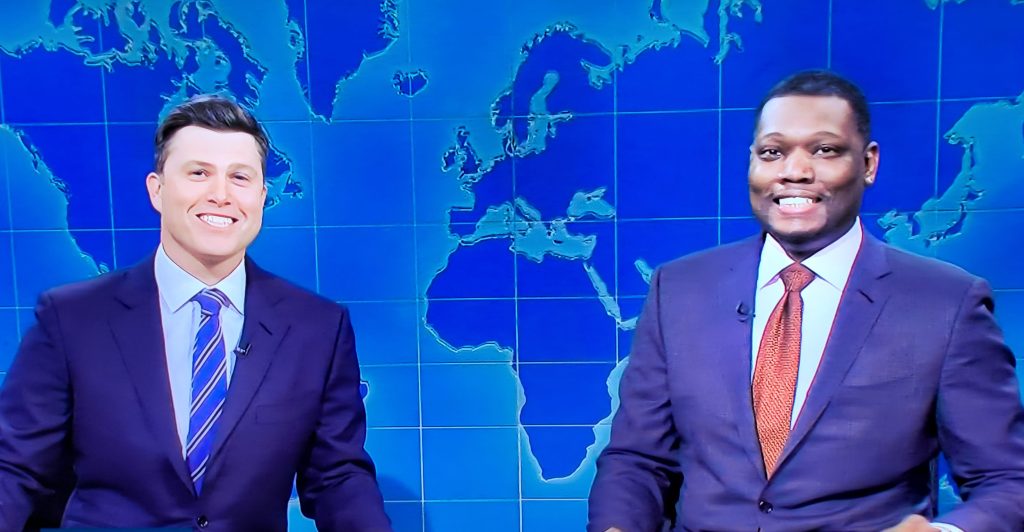 
It’s a daunting task to crack jokes during wartime, especially days after Russia has bombarded the Ukraine. However, Saturday Night Live’s Weekend Update hosts Colin Jost and Michael Che were fearless and eloquent in their approach to the topic.

SNL knows how to play sensitive situations classy. Reminiscent of when they returned after 9/11 in an opener that honored first responders, NBC’s late-night sketch show tonight skipped the opening skit in favor of a performance by the Ukrainian Chorus of New York.

“It’s a tough subject to make jokes about,” remarked Che toward the middle of the satirical newscast about the Russo-Ukraine crisis, “In my lifetime I’ve seen footage of attacks like this on other countries, but never a white one.”

“I have a close friend who is Russian,” Che continued. “I asked her what she thought about it, and she said ‘Michael, you don’t pay me to talk, baby.’ “

“Russia began their invasion of Ukraine,” Jost set-up at the top of Weekend Update. “President Putin launched the attack with support from allies like Belarus and Tucker Carlson.” (The latter recently opined that “The invasion of Ukraine is a humiliating defeat for Joe Biden.” The Washington Post headlined two days ago: “After downplaying Russia-Ukraine conflict, Tucker Clarson shifts his tone on Putin: ‘He is to blame’.”)

“Many analysts were surprised that Putin went through with the invasion, even though it was obviously going to be a colossal mistake,” continued Jost. “But he couldn’t back down after all that build-up.”

Then taking a jab at mother network, Jost beamed, “Kind of like NBC still had to go through with airing the Winter Olympics.”

Che added, “I’m very impressed by all the Ukrainian citizens signing up to defend their country, even the famous ones. Imagine that here? If you ever read on the news that Michael Che joined an American war, we have just lost that war!”

Jost then pointed out that one of the first places that Russian forces seized from Ukraine was Chernobyl, site of the 1986 nuclear disaster. “Said Ukrainians, ‘Oh, no, don’t take that!’” joked Jost. “Capturing Chernobyl is like landing an audition for Harvey Weinstein — now.”