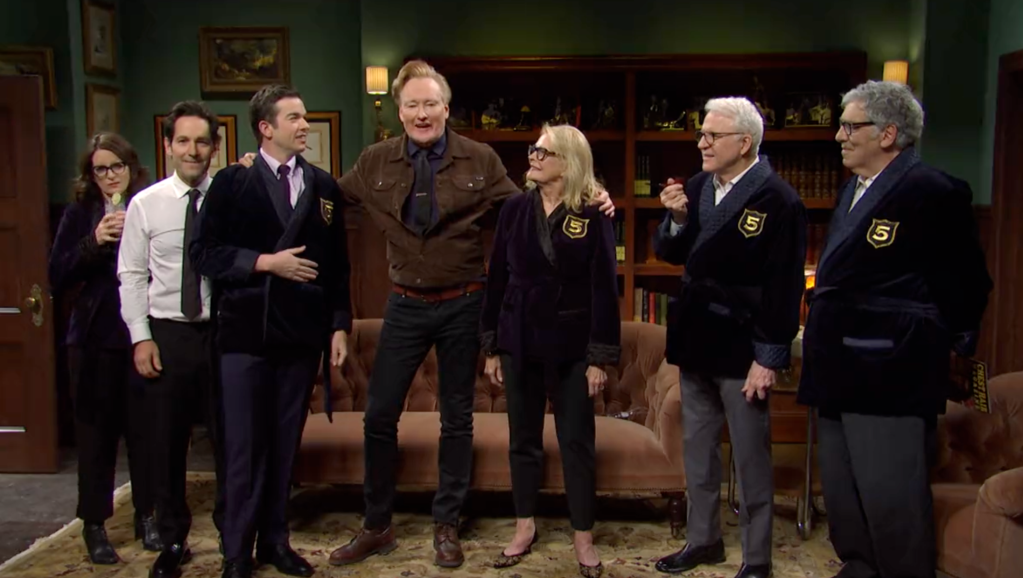 
“What we’re all trying to say is that this has become not special,” Steve Martin told John Mulaney during his SNL Five Timers club initiation.

“Did somebody say not special?” said Conan O’Brien as he burst through the door in echoes of his last Emmy appearance.

The former Tonight Show host was one of a number of five-timers helping to congratulate Mulaney for joining the club – he was joined by Steve Martin, Paul Rudd, Candice Bergen, Tina Fey and Elliott Gould.

“John, don’t listen to them, this is very, very special. I was in the very first five-timers special,” added a slightly flubby O’Brien, pointing out that he and Mulaney were only ever writers, rather than performers, on the NBC show. “John and I were never supposed to be on TV, we’re hideous.”

Bergen, who hosted five times between 1975 and 1990, congratulated Mulaney, who first hosted in 2018. “Let me be the first person to say ‘who are you’?,” she said. Replied Mulaney: “You wouldn’t know me but if you have a niece or a son who’s bad at sports, they might.”

Fey returned to the show with a drink, a Five Timers Fizz, which she said consisted of “Justin Timberlake’s tequila, Dan Aykroyd’s vodka, and Tracy Morgan’s club soda, which is aquarium water.” She pointed out that Mulaney wrote “that character with Bill Hader and 800 other things that aged terribly.”

The group was slightly concerned that the number of hosts joining the five-timers club was getting a bit too big. “In order for you to get in, someone has to retire,” posited Bergen.

It was left to Rudd, whose own five timers celebration was cut slightly short last year due to Covid, to give Mulaney his jacket even though his show was “going to be a lot better until the whole cast decided to call in sick.”