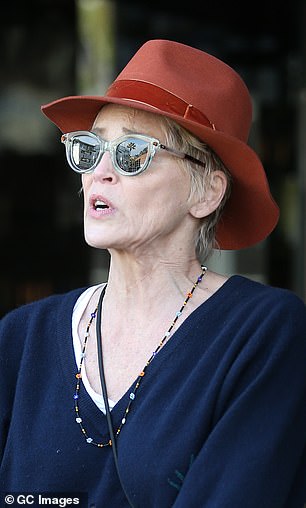 
Sharon Stone was critical of Joe Rogan amid the ongoing controversy surrounding the spread of COVID-19 misinformation, and Spotify‘s decision to add a warning to all podcasts on its platform discussing the ongoing virus.

Stone, 63, spoke Tuesday in Beverly Hills, California with TMZ, where she was asked about the ongoing developments over Rogan and his podcast, which drew attention last month after rock icon Neil Young pulled his music from the platform in protest of Rogan’s content in regards to the pandemic.

Rogan, 54, garnered controversy after a December 31 podcast of The Joe Rogan Experience in which he chat with Dr. Robert Malone, an anti-vaccine proponent who was previously banned from Twitter over the spread of COVID misinformation. 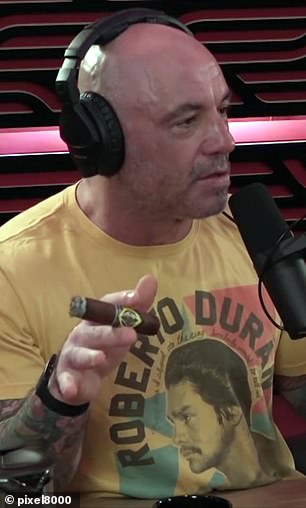 The latest: Sharon Stone, 63, was critical of Joe Rogan, 54, amid the ongoing controversy surrounding the spread of COVID-19 misinformation, and Spotify’s decision to add a warning to all podcasts on its platform discussing the ongoing virus

The streaming service on Sunday announced it was set to add a disclaimer prior to podcasts that include talk about COVID-19.

Rogan on Sunday said that he was ‘very happy with’ the company’s decision, and that he wasn’t trying ‘to promote misinformation’ or ‘be controversial,’ adding, ‘I’ve never tried to do anything with this podcast other than to just talk to people.’

Stone rejected Rogan’s claim Sunday that he would ‘try harder to get people with differing opinions’ on his podcast, saying the virus is not a topic up for interpretation.

‘I just want to say COVID is not an opinion-based situation and Mr. Rogan thinking that his opinion or a disclaimer for the lives that he personally has affected and caused losses of, it’s not an opinion,’ Stone said. ‘Mr. Rogan is risking people’s lives with his idiocy and his professing that his thoughts about COVID are opinions, they aren’t opinions.

Outing: Sharon Stone appeared to be in high spirits as she stepped out with her sister Kelly Stone in Los Angeles on Tuesday 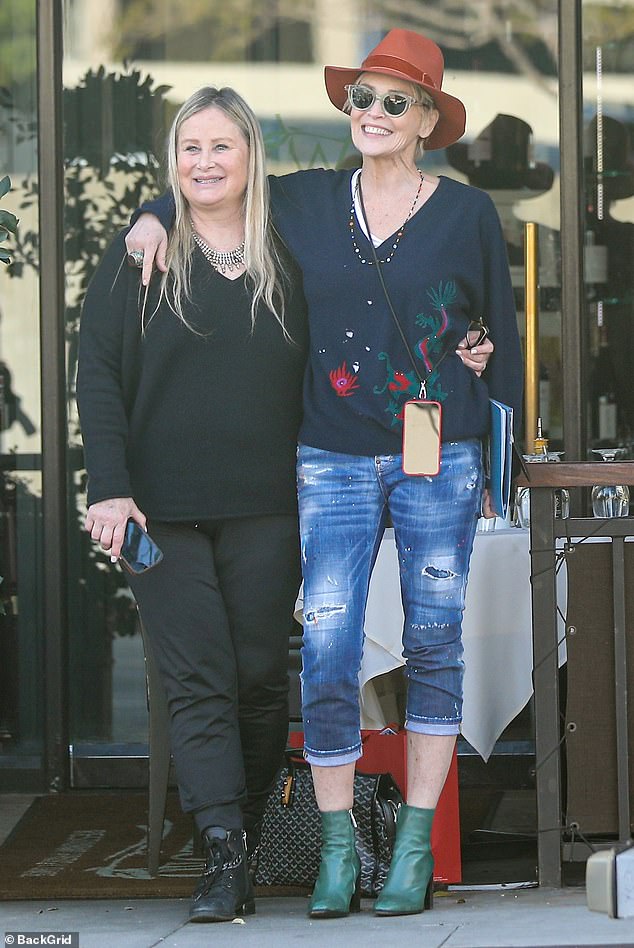 Family duo: The sisters, 63 and 61, were seen together outside a restaurant in Beverly Hills 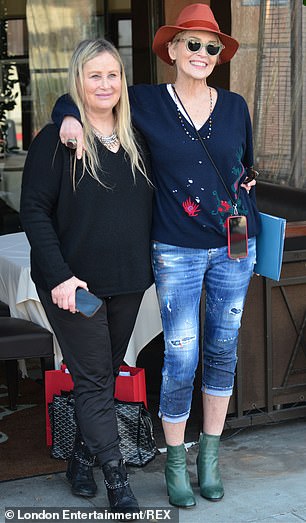 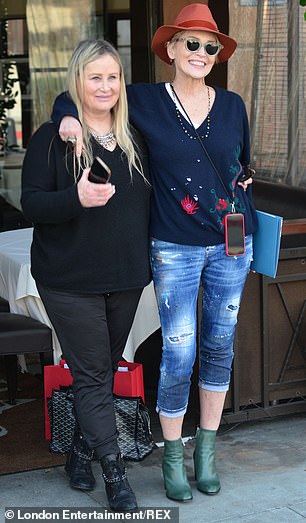 Accessories: The actress donned a burnt red fedora and a pair of translucent-framed sunglasses

‘COVID and infectious diseases are science and they are fact-based situations, so the pretense that these are opinions is dangerous – and his behavior is dangerous.’

The Sliver actress said the danger ‘has been demonstrated by so many of the people that have lost their lives for proclaiming the things that he is saying.’

Asked about the support Rogan has received from other celebrities, Stone pointed to decades of work she’s done in healthcare, including with Dr. Anthony Fauci, as the basis for her views on the issue.

‘I’m an infectious disease worker who has won the Nobel Peace Summit Award for my work in infectious disease, Harvard awards, Einstein awards, these type of things, and I worked with Dr. Fauci for decades,’ Stone said. ‘I think the people can say whatever they want to say, all I can say is that what I’m saying comes from my experience of working in overcrowded laboratories with people who risk their lives to save other people’s lives.

‘My opinions come from standing in hospitals with people with children dying of AIDS while I explain to their parents how heartbroken I am that they’re going to lose their infant or their child or their teenager or their sister or their brother or their mother or their father.

‘I’ve stood by the time that the bedsides of dying people for the last 25 years, I don’t know how many of these people’s opinions come with fact-based experience.’ 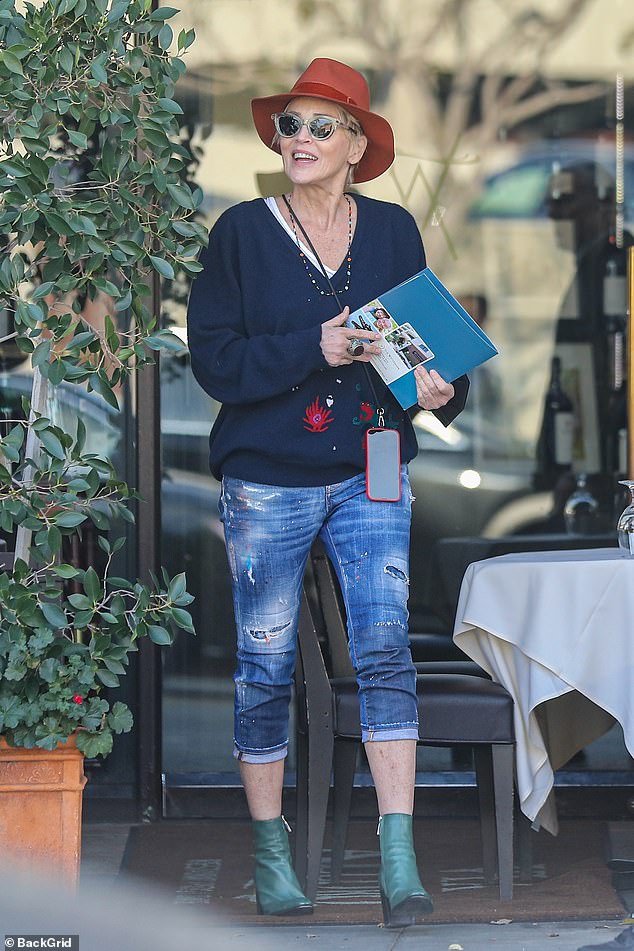 Fashion choice: The longtime entertainer was dressed in a navy blue V-neck sweater with red and green embroidery on it 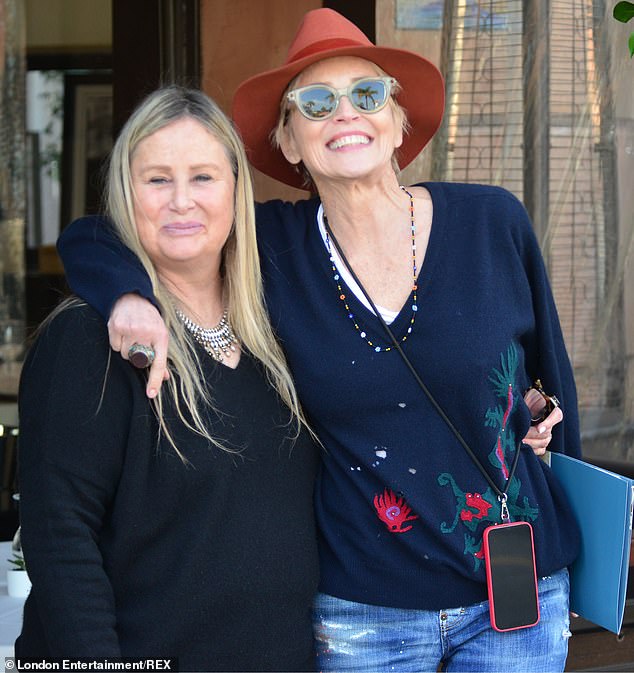 Sweet: The sisters looked happy to be spending quality time together as both smiled and embraced one another 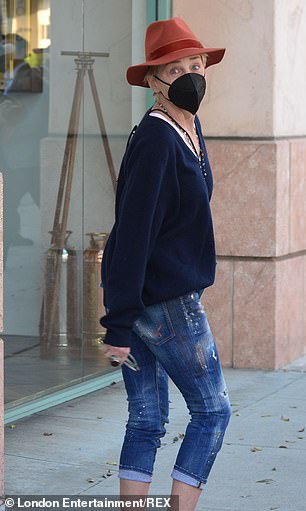 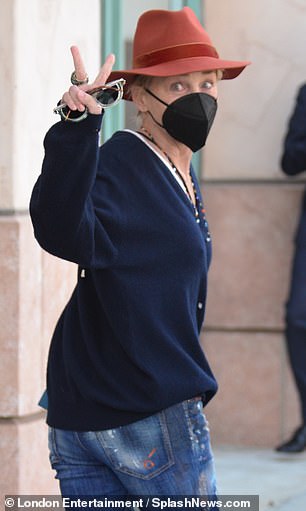 Cautious: Sharon pulled her black face mask over her mouth and nose before heading off and flashing a peace sign

The Oscar-nominated star lost both her grandmother and godmother to the COVID-19 pandemic, while her sister and brother-in-law both spent time hospitalized due to the virus.

Stone chat as she stepped out with her sister Kelly Stone in Los Angeles on Tuesday. The sisters, 63 and 61, were seen together outside a restaurant in Beverly Hills.

The actress donned a burnt red fedora and a pair of translucent-framed sunglasses. The longtime entertainer was dressed in a navy blue V-neck sweater with red and green embroidery on it.

She wore green, heeled booties that picked up the color in her top. A bit of a white t-shirt was visible underneath it. The movie star teamed the look with a pair of cropped blue jeans that were faded and distressed.

Sharon wore a long, colorful beaded necklace around her neck and she carried her phone on a lanyard. She let the mobile device hang loosely over her torso crossbody-style in a red case.

The Basic Instinct actress carried a blue folder during the outing, keeping it close as she smiled with her younger sibling.

For her part, Kelly was dressed in an all black look. She wore a long-sleeved sweater with a modest V-neck and added a pair of jogger-style pants. The outfit was pulled together with black booties and an eye-catching statement necklace. Kelly styled her straight, blonde locks loose with a center part and tucked them behind her ears.

The sisters looked happy to be spending quality time together as both smiled and embraced one another. Sharon pulled her black face mask over her mouth and nose before heading off and flashing a peace sign.

Back in 2020, Kelly and her husband Bruce Singer were hospitalized with Covid-19 and Sharon took to social media to ask for support.

‘My sister, Kelly, who already has lupus, now has COVID-19,’ she wrote on Twitter. ‘Please light candles for my sister Kelly and her husband, my dear friend Bruce.’

The two later made a full recovery.