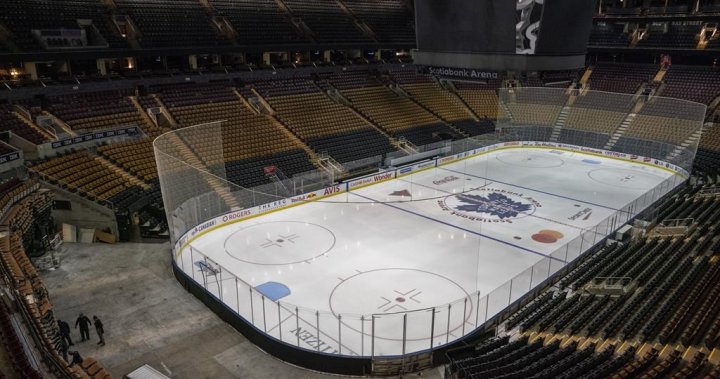 
The stands will be a lot busier at Scotiabank Arena this week in the wake of the Ontario government slightly accelerating plans to ease attendance limits at indoor sports events.

Initially permitted capacity was going to rise to 50 per cent Feb. 21 and 100 per cent on March 14. That has been pushed forward to Thursday and March 1, respectively, “if public health and health system indicators continue to improve.”

The last four Toronto Raptors games and two Maple Leaf contests have been restricted to 500 fans in the building.

With Leaf home games Thursday against Pittsburgh and Saturday against St. Louis, Maple Leaf Sports and Entertainment had to pivot quickly to get make available the 10,000 tickets allowed per game.

While a presale for members has already started for the next two games, Tom McDonald, MLSE’s senior vice-president of ticket sales and service, believes the quick turnaround will result in a “few thousand” tickets available to the general public. They will go on sale Wednesday at noon, as well as some tickets for the Feb. 24 game against the Minnesota Wild.

The Leafs’ season-ticket base covers some 15,000 seats.

MLSE essentially divided its season-ticket base into half in the past when 50 per cent capacity was in effect due to the pandemic.

“We spaced our members in each section, by row, and they just got every other game,” said McDonald.

The Ottawa Senators’ first home game under the new attendance rules is Saturday against Boston.

The Toronto Raptors, currently on a five-game road trip, don’t play at home again until March 1 when the Brooklyn Nets visit.

Ontario announced in early October, ahead of the NHL and NBA seasons, that major indoor pro sports teams had the green light to host capacity crowds.

That move to full capacity had been widely expected after Ontario had raised capacity at indoor venues to 50 per cent or 10,000 fans, whichever number is lower.

The Leafs averaged 18,819 spectators through 17 home dates this season, while the Raptors averaged 19,777 in their 15 contests before capacity was capped in mid-December to 50 per cent in response to the latest wave of COVID-19.

In late December, attendance was further reduced to a cap of 1,000 spectators or 50 per cent capacity, whichever was less. MLSE responded by saying it would transition “to operating without any sold tickets” for the next three weeks.

The provincial government then announced last month that — effective Jan. 31 — large sports arenas and concert venues would be allowed 500 people or half-capacity, whichever is lower, until Feb. 21.