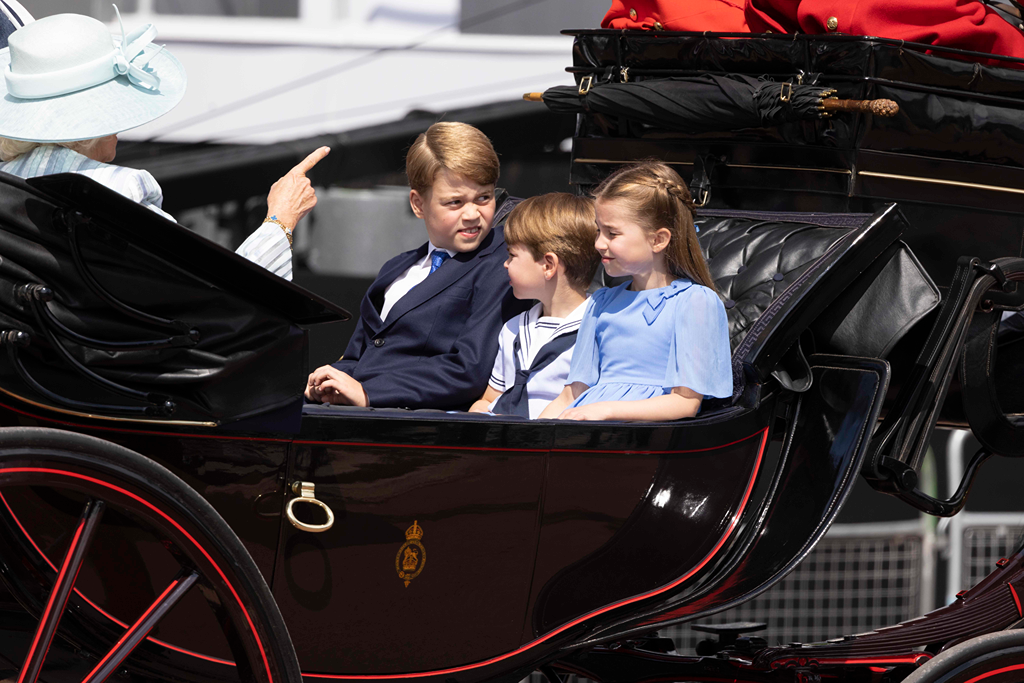 
The Platinum Jubilee celebrations for Queen Elizabeth II were kicked off earlier today in London with the Trooping the Colour ceremony.

Kate Middleton and Prince William’s children stole the show at the parade with their adorable white and blue outfits. The trio of royal kids sported multiple different shades of blue for the occasion. The eldest of the three, Prince George, was dressed in a sharp formal suit for the historic celebration. He waved to the public wearing a full suit featuring a navy blue blazer, a white collard shirt and a patterned azure blue tie with small white dots printed across it.

Seven-year-old Charlotte took on a lighter blue hue for the occasion. She covered the pastel side of the color spectrum in a sky blue dress. The frock featured a bow detail at her shoulder as well as a pleated skirt and flowing translucent mesh short sleeves.

The Duke and Duchess of Cambridge’s youngest, Louis, paid homage to his father in a sailor inspired ensemble. The 4-year-old wore a white shirt with long lapels and a matching straight neck shirt underneath, both of which were lined with navy stripes. The sailor look was complete with a navy necktie. Prince William wore the same sailor outfit at Trooping the Color when he was a young boy.

The siblings rode together in a carriage with their mother, as well as Camilla, Duchess of Cornwall.

The Queen’s Platinum Jubilee celebrates Queen Elizabeth II’s unprecedented 70-year reign over the United Kingdom and associated Commonwealths. The Queen is the first British Monarch to achieve a Platinum Jubilee following seven decades of service to the throne, longer than any other British royal in history. The Platinum Jubilee, which runs from June 2 to June 5, is a four-day bank holiday that will include celebrations all over the U.K., including parades, performances, and other public gatherings.