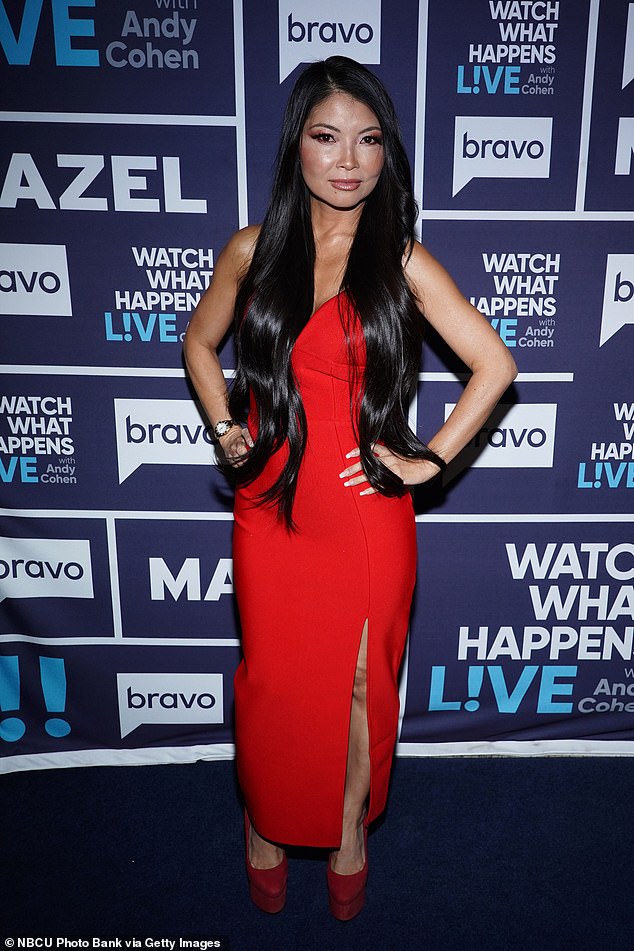 
The Real Housewives of Salt Lake City star Jennifer Nguyen is threatening to ‘speak her truth’ after being fired from the show by Bravo.

But now Jennie has hinted that there is more to the story than fans know.

Taking to her Instagram Stories on Tuesday night, she wrote: ‘I will be finally speaking my truth tomorrow now that I am allowed to. I will be taking questions after! Thank you to who all supports me.’

In a statement a statement yesterday, the network said it has now ‘ceased filming’ with the 44-year-old reality TV personality.

‘Bravo has ceased filming with Jennie Nguyen and she will no longer be a cast member of ‘The Real Housewives of Salt Lake City.’

‘We recognize we failed to take the appropriate action once her offensive social media posts were brought to our attention. 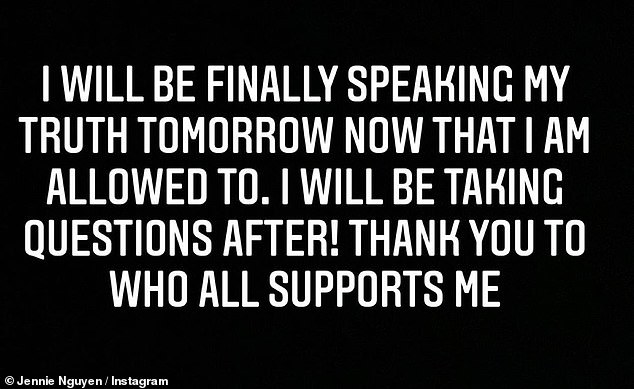 Ominous: Jennie is teasing fans with being able to ‘speak her truth’ now she is ‘allowed’ to 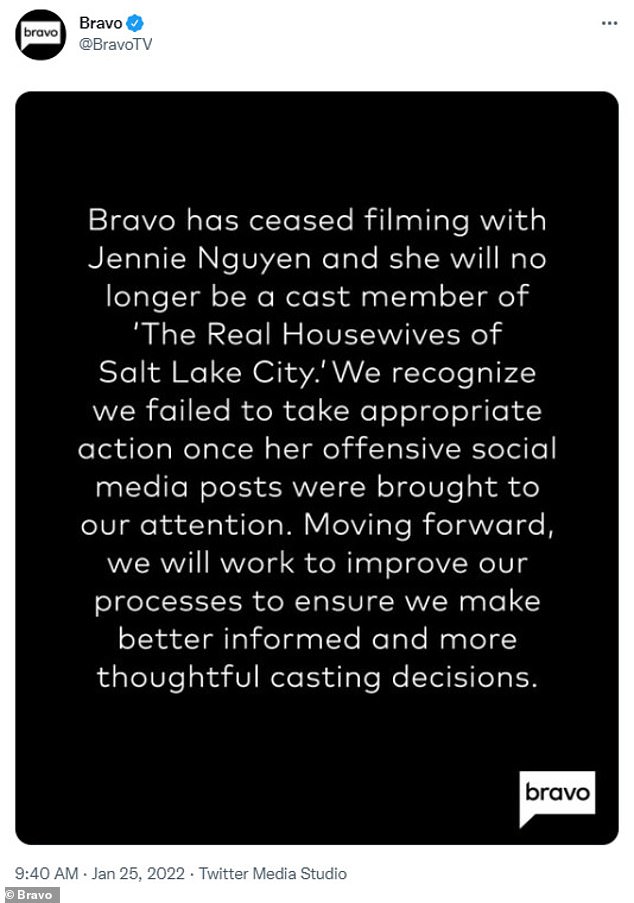 She’s out: Bravo took no prisoners as it revealed it has now ‘ceased filming’ with the star

‘Moving forward we will work to improve our processes to ensure we make better informed and more thoughtful casting decisions.’

The offending jokes – using phrases such as ‘BLM Thugs’ – were posted over a six-month time period amid the ongoing Black Lives Matter protests in 2020.

Andy Cohen addressed the drama this week on Watch What Happens Live and alluded to some incoming disciplinary action for Jennie.

He said: ‘I’ve also seen all the tweets wanting to know what’s being done about those posts. I just wanna say in case anyone doesn’t realize it, there are many serious discussions happening right now about everything.’ 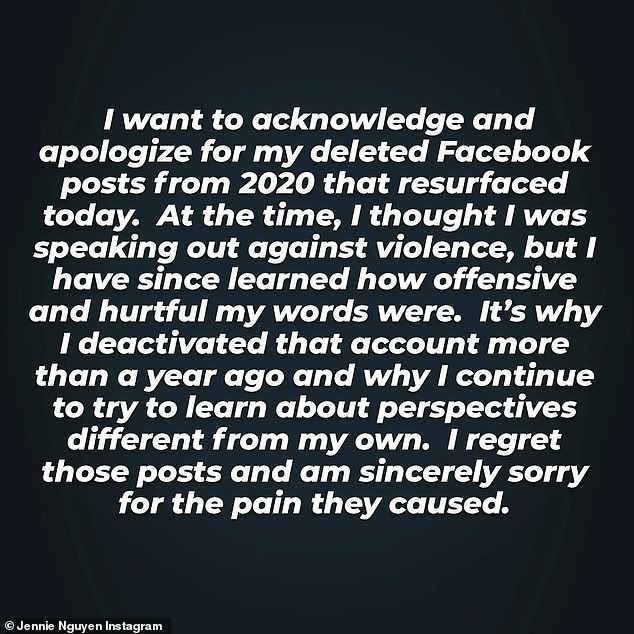 Addressing the claims: Jennie admitted she had shared the offending posts in a Instagram statement last week

‘I can’t address the situation right now but it will be addressed very soon,” he concluded, “and thank you for your patience and the posts were very upsetting, rightfully, and disgusting. So, there you go.’

Fans had already called for the reality star to be fired last Wednesday, after they slammed her over the offensive and controversial posts.

The various memes carry a theme of depicting the Black Lives Matter protestors in a negative light, as well as encouraging violence against the movement itself.

Addressing the controversy herself last week, Nguyen admitted she had shared the posts, writing: ‘I want to acknowledge and apologize for my deleted  Facebook posts from 2020 that resurfaced today.’

‘At the time, I thought I was speaking out against violence, but I have since learned how offensive and hurtful my words were.’

‘It’s why I deactivated that account more than a year ago and why I continue to try to learn about perspectives different from my own. I regret those posts and am sincerely sorry for the pain they caused.’

Screenshots first posted by All About The Tea show Nguyen sharing the disturbing images to her social media, including one that doubted George Floyd was killed as a result of police brutality.

One cartoon image shows an old lady bragging about how many ‘rioters’ she has hit with her car. 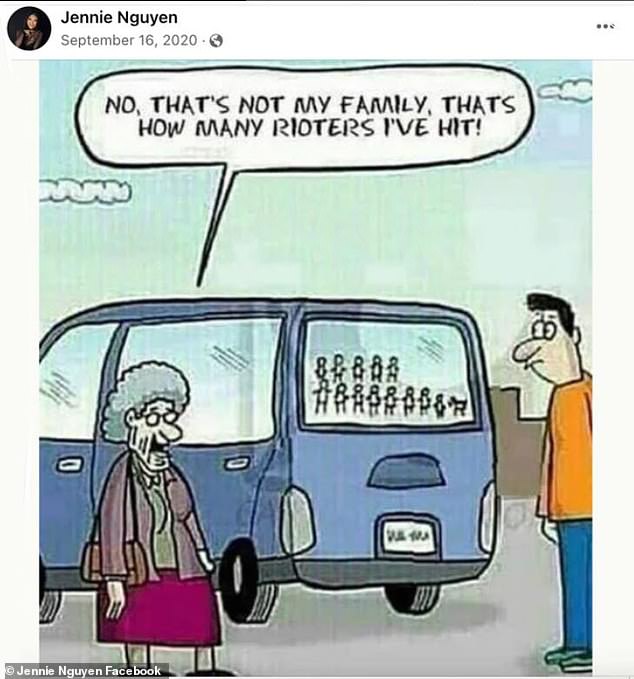 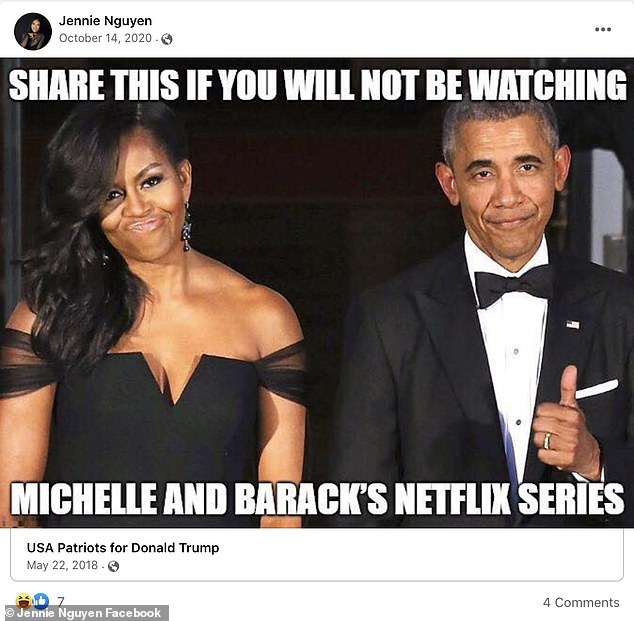 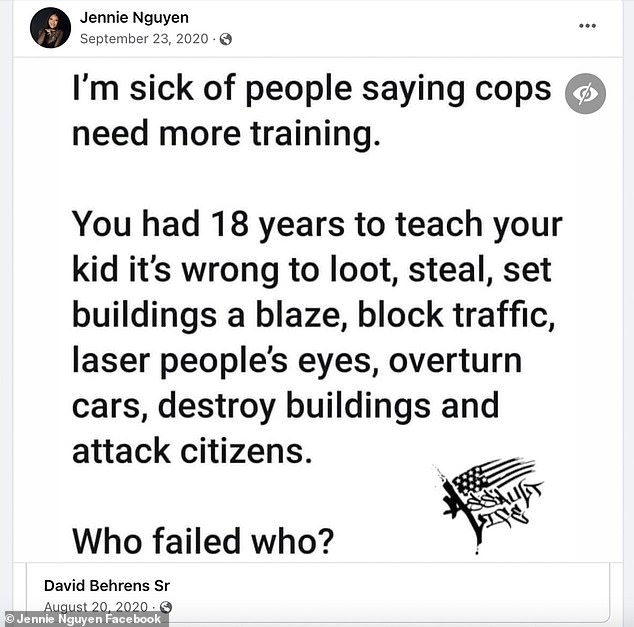 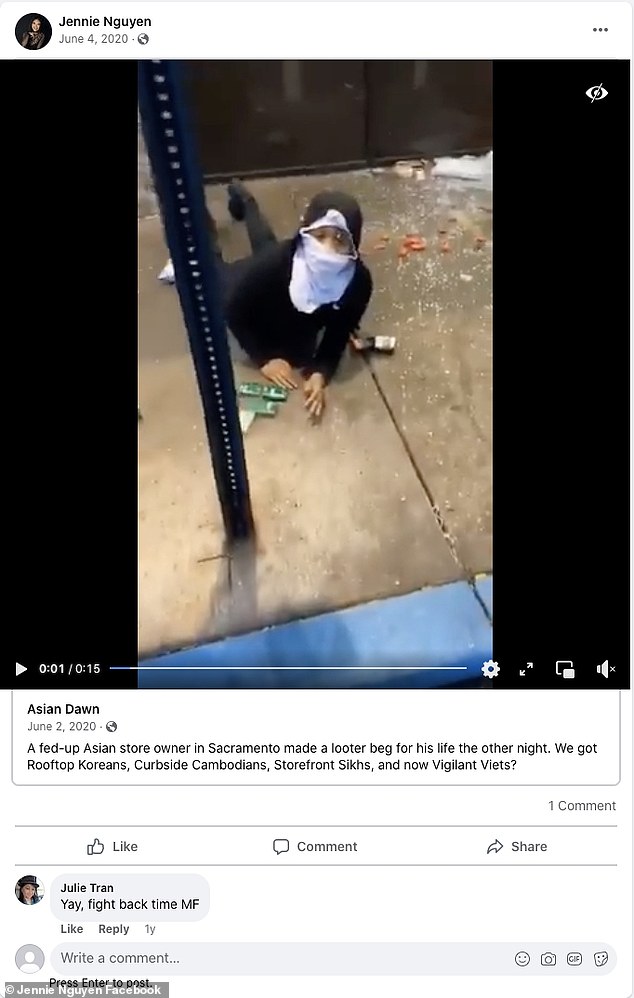 Caught out: The offending jokes – using phrases such as ‘BLM Thugs’ – appear to have been posted over a six-month time period amid the ongoing Black Lives Matter protests in 2020

Reacting to the resurfaced posts, fans of the show immediately began to call for Nguyen to be fired.

‘I’m calling on @BravoTV and @Andy #RHOSLC to immediately fire Jennie Nguyen! No half hearted apology will work! She must be terminated!’ one fan wrote on Wednesday.

Fans also took issue with Nguyen taking her co-star Mary Cosby to task on the show, for making the racially insensitive remark about ‘slanted eyes.’ 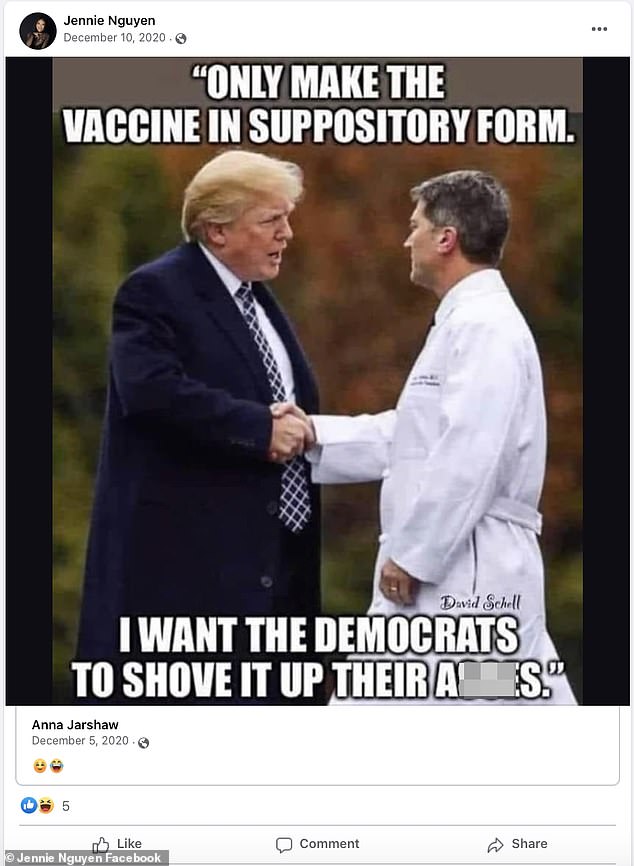 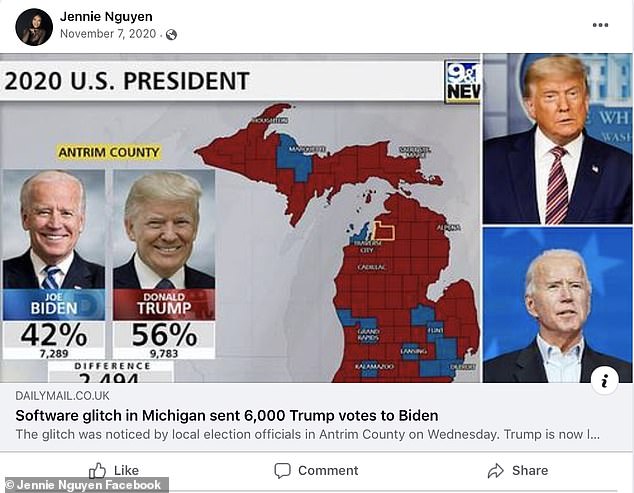 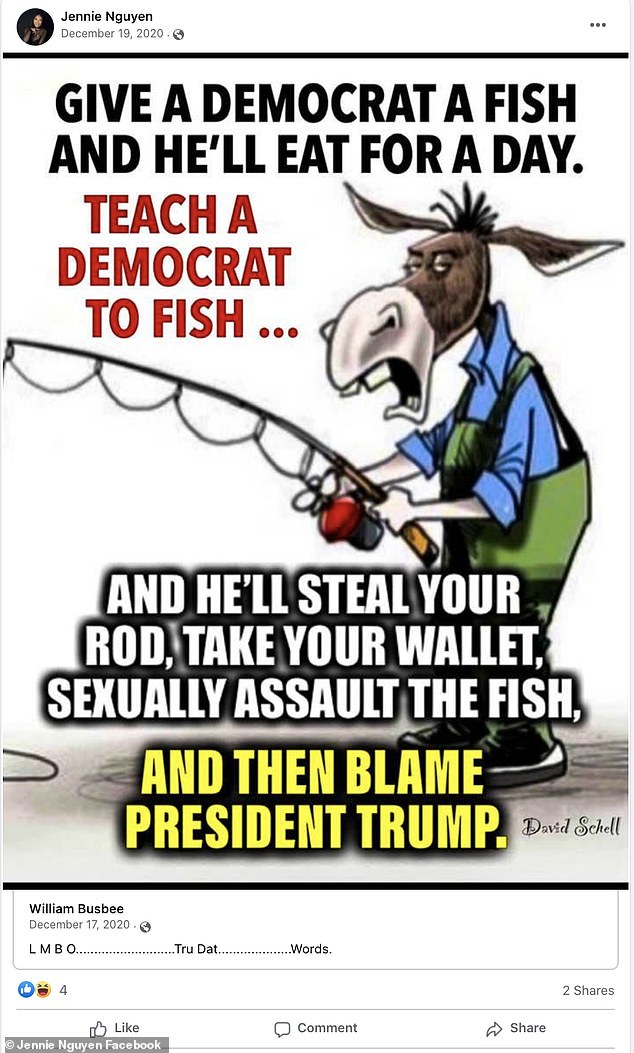 ‘Jesus getting the screenshots from Jennie’s Facebook after Mary sent him #RHOSLC,’ a fan joked.

One meme shows Former President Donald Trump shaking hands with a doctor, along with the text: ‘Only make the vaccine in suppository form. I want the democrats to shove it up their a***s.’ 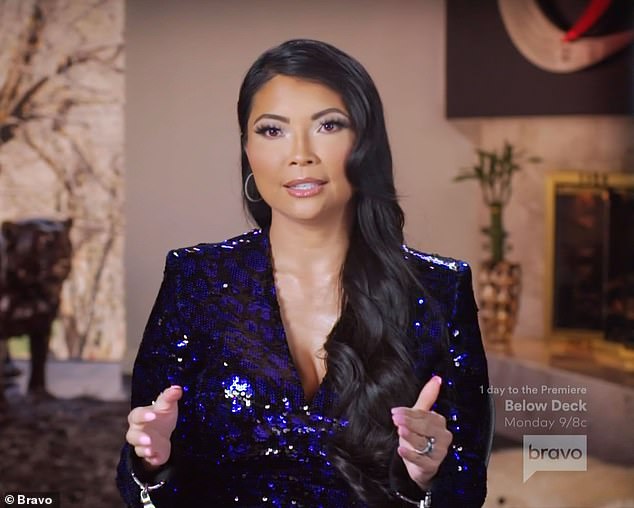 Controversy: Fans also took issue with Nguyen taking her co-star Mary Cosby to task on the show, for making the racially insensitive remark about ‘slanted eyes’