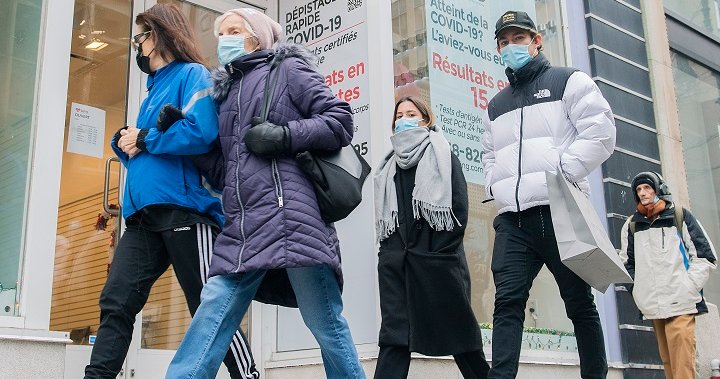 
Quebec has already entered a sixth wave of the COVID-19 pandemic driven by the BA.2 subvariant, two experts said Monday, although it’s unclear how severe it will be and whether the rest of the country will follow.

While the province’s public health director has been reluctant to confirm a new wave, Dr. Don Vinh of the McGill University Health Centre has little doubt it’s underway.

He said Quebec has seen an increase in outbreaks in seniors and long-term care homes as well a 60 per cent jump in the number of health workers off the job with the virus.

“I think these are signals that cannot be ignored and interpreted any other way than to say we are we are already started in that wave,” he said in an interview.

On Sunday, interim public health director Luc Boileau said the more contagious BA.2 subvariant was now dominant in the province, accounting for two-thirds of positive cases. But despite an increase in cases, hospitalizations and the test positivity rate in some regions, Boileau said it was too soon to declare the onset of a sixth wave.

The arrival of the BA.2 subvariant of Omicron comes as provinces have lifted most public health restrictions.

In Ontario, wastewater data has suggested cases have been on the rise since early-to-mid-March, and Premier Doug Ford said last week that the province was preparing for a potential rise in hospitalizations.

Saskatchewan, meanwhile, said the BA.2 subvariant accounted for over a quarter of cases in the week covering March 13 to 19, up from 5.4 per cent the previous week.

1:53
‘Rise of the BA.2 variant is worrisome’: Quebec urges caution as it warns of ‘possible’ 6th COVID wave

‘Rise of the BA.2 variant is worrisome’: Quebec urges caution as it warns of ‘possible’ 6th COVID wave

British Columbia has also seen an uptick in hospitalizations in recent days, but Vinh says it is impossible to know whether Quebec’s entry into a sixth wave is a harbinger of things to come across the country. “It’s very hard to know ahead of time what any wave will do,” he said.

As an example, he noted that Quebec had a much smaller fourth wave than the rest of the country. Even in Quebec, the new wave seems to be hitting unevenly, with a greater impact outside Montreal.

Modelling in both Quebec and Ontario have suggested that any rise in hospitalizations is likely to be much smaller than the peaks attained in January.

But Vinh, an infectious diseases specialist, says modelling is never perfectly accurate and should be used to prepare for different scenarios rather than to predict the course of a sixth wave.

“Will it lead to a surge that threatens our health-care system capacity? Will it be a blip of a wave like we saw last spring, or will it be as devastating as the first one and in that case, will it be again with the vulnerable and the elderly?” he said.

“Again, we have five waves that teach different lessons.”

Benoit Barbeau, a virologist at the Université du Québec a Montréal, also believes Quebec has entered a sixth wave but says there’s no reason to be alarmed.

He said the combination of vaccination and high levels of prior infection with warming weather means Quebec is much better equipped to handle this wave than previous ones. “This wave, which is caused by BA.2, should not have the same impact as Omicron,” he said in a phone interview.

However, Barbeau said the rise of the new variant is a reminder that “the pandemic isn’t finished.”

Both experts say that tracking the new wave is a challenge given the restrictions on PCR testing.

Quebec should plan mass campaign to give out COVID-19 booster shots: vaccine committee

While some provinces use wastewater testing to monitor the levels of COVID-19 in the population, Quebec allowed a pilot project along those lines to lapse. It has promised to resume testing in the coming months.

Barbeau said his biggest worry about the new wave is that it will cause “collective discouragement,” resulting in people losing faith in vaccines and no longer taking precautions. He said vaccines have done their job by limiting hospitalizations and deaths, and they will continue to improve.

It’s also important, he said, for people to remember to keep protecting themselves and others, even if restrictions and mask mandates have ended in many parts of the country.

That means wearing a well-fitting mask in crowded places, opening windows and improving ventilation, and getting booster shots for those who are eligible and haven’t had them.

“The sixth wave reminds us that the pandemic is there and we shouldn’t be discouraged,” Barbeau said. “We must simply follow the best guidelines, and be responsible to ensure we act to limit transmission.”