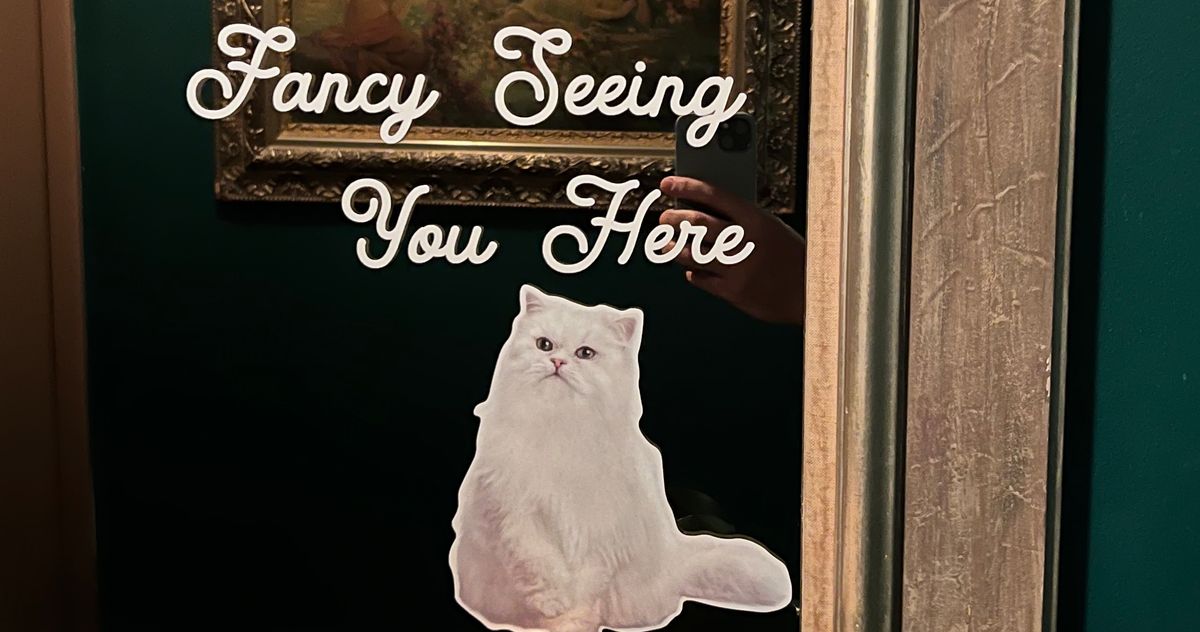 Who do we work for? What is free will? How much of your daily activity is dictated by marketing executives and/or parasites? These are the questions posed by New York City’s latest pop-up, sometimes a bit too vigorously.

“Cats used to be employees,” chef Amanda Hassner told me last night. “We domesticated cats because we needed somebody to catch mice in our barns who were trying to steal our grains.” Yet somehow, we now serve them.

Hassner has been the chef for Fancy Feast since 2010, having transferred over from Stouffer’s and Lean Cuisine. (These are all wonderful brands in the Nestlé family, the collection of waters, coffees, and — who could forget! — baby formulas that had a profit of about $5.5 billion in the first half of 2022.) Hassner, with her attractive colleagues in marketing, is now presiding over a two-day restaurant experience. It is called Gatto Bianco and is housed in a rental space in the West Village.

There, today and tomorrow night only, humans will eat human food created by a pet-food company while discussing the palates and interests of cats. The menu includes brasato di manzo, which is a fancy kind of pot roast.

Nearly everyone at the night-before-opening preview for select cat enthusiasts in and near the food-media space was either 28 or 33. The main event was meeting “the” Fancy Feast cat.

New York, like every other city that’s running dangerously low on ideas, is crammed with grotesque commercial experiences like the Van Gogh Immersive Experience and the World Trade Center Museum. This kind of activation — in this case, signaled by the cat wallpaper, the presence of an actual cat, the word cat spoken hundreds of times (particularly while eating), and the shiny stacked cans of Fancy Feast everywhere amid the camellias and faux-marble tables — is experiential mindfuckery, and it onsets a condition. Suddenly you could see the matrix of the trees and the forest at once: Why were we here at this fancy place? Because fancy is the condition of the feast. Why eat human food while discussing cat food? Well.

The tinfoil-hatted among us would suggest that there’s a corporate movement afoot to bring together the human and animal food pipelines. Purina, Fancy Feast’s umbrella brand, has regularly used the term “human grade” to describe its animal foods for years now. (Making food actually human grade requires certification of every ingredient and also the facility, an enormous task, as Pet Food Processing helpfully points out.)

But there are easier ways to unite human and pet food. “The human and pet food streams are already converged, with many ingredients appearing in both,” Pet Food Industry reported last month. The catch? “The growing popularity of insect-based pet foods in Mexico exemplifies this.” U.S. consumers are maybe not ready for that conversation yet, but check back on this a little further into the environmental apocalypse, thanks.

People who work in marketing make a lot of money because it actually works. What are the brand values of Fancy Feast? I would say that it is fancy. But it is also surprisingly hard to find at the Petco in Union Square, which is where I went after my own fancy feast, because the event’s parting gift bag, while immense, somehow did not actually include cat food.

Cat food for cats, and almond cake for humans.

Cat food for cats, and almond cake for humans.

At Petco, Fancy Feast occupies just a tiny little back corner of shelf space. It is possible that cat-food shoppers in Union Square demand a product with a more primal appeal, because every other cat food in the store is named Blue Wilderness or Wholehearted or Taste of the Wild or Instinct. Nothing fancy about them. These cat foods are all about respecting the lineage of the little obligate carnivore that lives inside your house. They are cuddly now, but remember that they were once vicious. How do we reconcile these two conflicting realities?

Well, some would say that’s where the toxoplasma gondii comes in.

Some huge number of Americans currently house the parasite T. gondii — could be one in ten, could be one in three, nobody’s quite sure, but it’s the reason they tell pregnant women not to scoop litter boxes, because it can live for a long time in cat poop. Instead of useful research, there are heaps of absolutely deranged studies about toxo and its effect on non-cats. These research topics include “does this parasite make us sexier,” “does it make us sluttier,” and “does it make us serve cats?”

None of these studies comes right out and says “yes.” Still, media outlets tend to sensationalize and science-fictionalize aspects of parasites. We love to think we’re subject to mind control from the one thing that probably isn’t trying to control our minds. (That’s what the marketing people are for.)

Our stupid devotion to cats seems to have no real parasitical basis; the parasite doesn’t even want us anyway. “Humans are dead-end hosts for T. gondii, because the chances that a human being will be eaten by a feline are infinitesimally small,” as a study published in Schizophrenia Bulletin pointed out. (But the chances are not zero!)

In any event, if we’re all destined to live in a future where cat food and human food are the same thing, I figured I might as well get a jump on the trend.

Safely at home, unsafely surrounded by cats, I distributed one can of Fancy Feast® Medleys Beef Ragú with Tomatoes & Pasta in a Savory Sauce Wet Cat Food onto four plates. One cat ate two plates ferociously. One cat picked a bit. The third cat, who’d never lived on the streets and had never had a carb in his life, turned up his nose. My own plate was revealing. The aroma was strong — an all-day tray of deli steam table ravioli in sauce. It really wasn’t so different from the braised beef we’d been served at the restaurant.

My revulsion, I realized, was just a passing instinct, like when you walk on a thick glass floor or see a big spider in a movie. Food is food, and this food tasted a lot like these frozen Australian meat pies you can get in Whole Foods. I love those. I can love this, too, if that’s what Nestlé and the parasites want.

By submitting your email, you agree to our Terms and Privacy Notice and to receive email correspondence from us.