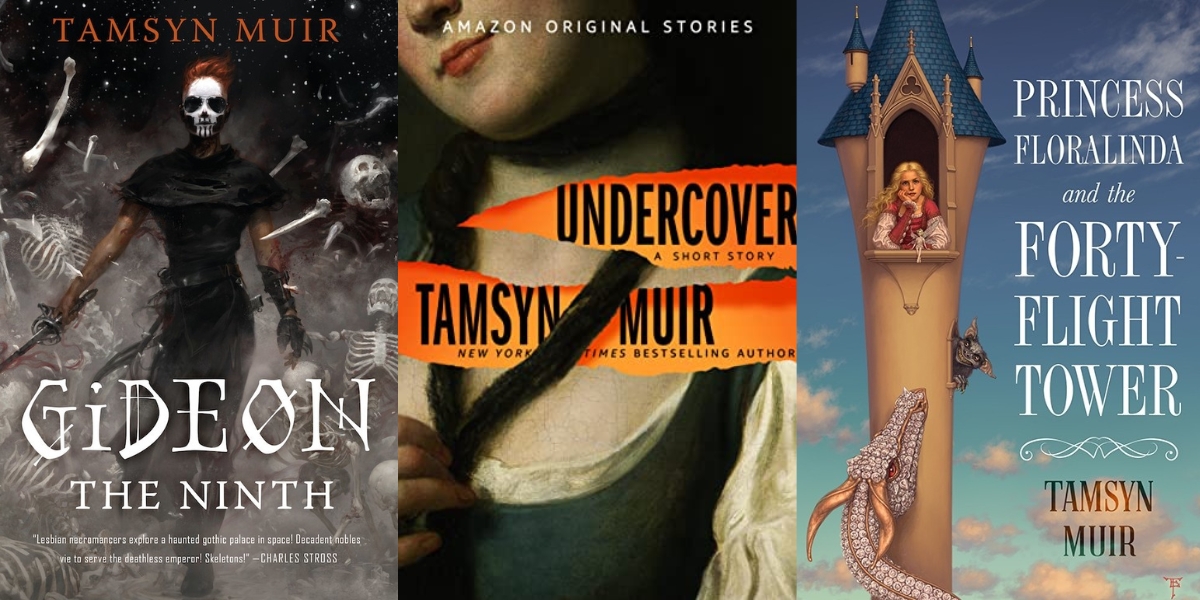 Are you a fan of Tamsyn Muir’s darkly magical fantasy stories? Then check out our interview with Tamsyn and read about her working process, influences, and favorites.

PIN ME for later

* Disclaimer: Some links on AsianaCircus.com are affiliate links. If you click through and make a purchase we may receive a small commission (at no additional cost to you).

Pop culture Closer: Have you ever wondered what your favorite artists’ working processes what are they reading, or about their influences, favorites, and what they were listening to while writing your favorite stories, or what superpower they would want? Then check out our fun Pop Closer interviews with beloved and talented artists including musicians, authors, filmmakers, scientists, and visual artists, and peek behind the scenes.

Get to Know Tamsyn Muir Closer

Tamsyn Muir is one of the most celebrated dark fantasy-fiction authors of our time whose works enchanted millions of readers around the world. She’s the bestselling author of the popular Locked Tomb Trilogy titled Gideon the Ninth, Harrow the Ninth, and Nonna the Ninth.

Tamsyn also won many prestigious awards including the Nebula Award, the Shirley Jackson Award, and the World Fantasy Award. Tamsyn grew up in New Zealand, however, she’s currently living in Oxford, England.

If you haven’t read any of her works yet but love darkly atmospheric and complex fantasy stories, and unique horror fiction novels then you should definitely check out her books because you’re in for a serious treat.

Tamsyn’s newest dark fantasy horror novel titled Undercover is a part of the Into Shadow anthology (Book 4 of 7) and is a perfectly spooky, thrilling, and quick read. Fans can enjoy the story both in Kindle Edition and as an Audiobook.

We were one of the lucky few who were gifted a copy of the brilliantly eerie Into Shadow short story collection. Since we absolutely loved the stories and are huge fans of the authors we also got a chance to ask a few questions and do a short interview with Tamsyn.

When a stranger comes to town, secrets are sure to come out. New York Times bestselling author Tamsyn Muir spins a twisty—and twisted—short story of revenge and survival.

A fresh-faced newcomer arrives in an isolated, gang-run town and soon finds herself taking a job nobody else wants: bodyguard to a ghoul. Not just your average mindless, half-rotted shuffler, though. Lucille is a dancer who can still put on her own lipstick and whose shows are half burlesque, half gladiator match.

But the stranger is no stranger to this particular ghoul. Both women are undercover in their own way. And both have something to lose if their connection comes to light.

Readers can enjoy a wide range of stories and explore atmospheric dark fantasy worlds while also getting to know female knights and bodyguards, mediums, and ghouls among many other fascinating characters human and supernatural characters.

The settings also vary and readers can get immersed in modern and historical dark fantasy worlds as well as travel around the world and visit all sorts of places from small US towns to the magic-filled streets of Brazil. You’ll be able to find all types of dark fantasy stories in this collection so you can actually enjoy modern, historical, mystery, and epic dark fantasy tales all in one.

These spooky stories were designed to be read or listened to in a single sitting so they make perfect companions for those who are looking for quick but chilling bedtime reads.

A big-big THANK YOU to Ms. Muir for doing the interview and of course for her brilliant books.

What inspired your story?

Raymond Chandler’s The Big Sleep and time spent adjacent to queer burlesque. I was briefly the world’s worst pole dancer – my career ended early when not only did my every attempt to invert end in hilarious injury but when I got a hand infection so badly that I was pretty certain it was the early stages of necrosis. Actually, ‘experience with burlesque ended in early zombification’ and ‘I love Raymond Chandler’ are entirely the Venn diagram for this story.

What would you like to express/achieve with your work?

Every piece is different – I don’t have an overarching goal. I’m still sharpening my horror chops. Slow-building horror is some of the hardest to do – “Undercover” is another practice piece.

How do you do your research?

In a very ad hoc way. For specific things I’ll sequester myself away in the library (living in Oxford, I’m spoiled) and for very specific things I might hunt down an academic (living in Oxford, etc). Once I collared a friend as a research assistant who’s a HEMA sword fighter – that was great. I still feel small, though, whenever I think about the time a very decorated SFF author told me coolly that she had personally handled and shot every single gun used in one of her books. I will NEVER be that thorough, nor that cool.

How did you start writing?

I’ve been writing ever since I was a kid – it was a means of escape. How I got my professional start was that I was a teacher for a long time and dabbled on the side, not really thinking I’d ever publish anything other than a short story here and there. I didn’t come from a family where anyone thought art could earn you a dollar! But even if my career hadn’t worked out, I’d still be writing. I don’t think I can stop.

As a reader and art lover, do you have any book, movie, or music recommendations you’re excited about?

I’m still super excited about Rich Larson’s Ymir which came out earlier this year. It’s a sci-fi thriller Beowulf retelling that I kept thinking about long after I closed the book.

What kind of music do you listen to while writing?

Instrumental – I mostly get distracted by lyrics. I listen to a lot of dream house/trance because the nineties apparently never ended for me.

What other artists/writers influenced you as a kid?

I read so widely as a kid that I don’t think I can isolate one specific influence. Books saved me. One of my earliest reading memories, though, is Nicholas Stuart Grey – I can’t count the number of times I re-read Grimbold’s Other World.

What is the best and most challenging part of being a writer?

If you could have any superpower, what would you choose and why?

I think the world’s greatest superpower would be to always be fully comfortable in airline seats.

Do you have any upcoming projects or collaborations your fans should know about?

I’m really looking forward to my second book with Subterranean Press, the sequel to Princess Floralinda and the Forty-Flight Tower. I don’t have a set publication date yet but the sequel is called Queen Floralinda Takes Her Throne. It’s a manifesto about fairytale princesses. I hope readers who enjoyed Floralinda the first time around will enjoy her second outing even more.

PIN ME for later

THANK YOU FOR READING!