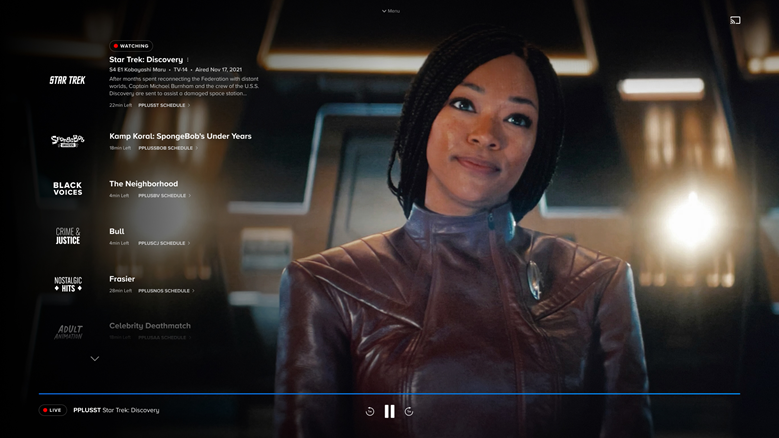 
Paramount+, taking a page from the established streaming playbook (one used effectively by its sibling, Pluto TV), has introduced 18 live channels.

The 24-7, ad-supported offerings are organized according to specific categories and, in some cases, major show or franchise brands like Star Trek, Paw Patrol and SpongeBob SquarePants.

The themed channels showcase the most-streamed genres on the service, which launched in rebranded and expanded form last March. Channels include Kids & Family Fun, Crime & Justice and Reality TV: Competitions.

Along with Pluto, several other rivals in streaming have included live channels over the past several years, especially those looking to maximize advertising revenue opportunities. NBCUniversal’s Peacock launched in 2020 with live channels, and major AVOD players like Crackle, Tubi and Amazon Fire TV have also incorporated them.

“Even in the era of on-demand, there is clearly a strong consumer appetite for reimagined linear channels that provide effortless, lean-back entertainment,” ViacomCBS streaming CEO Tom Ryan said. “Inspired and informed by the winning model Pluto TV pioneered and popularized, these highly curated channels underscore the power of our unified streaming organization and serve as a product differentiator in the SVOD space, by offering subscribers yet another way to experience and discover programming on Paramount+.”

Ryan co-founded Pluto, which Viacom acquired in 2019 before reuniting with CBS.

In addition to the 18 channels launching today, the company also teased a Movies channel and a RuPaul’s Drag Race channel, both of which will launch later this month.