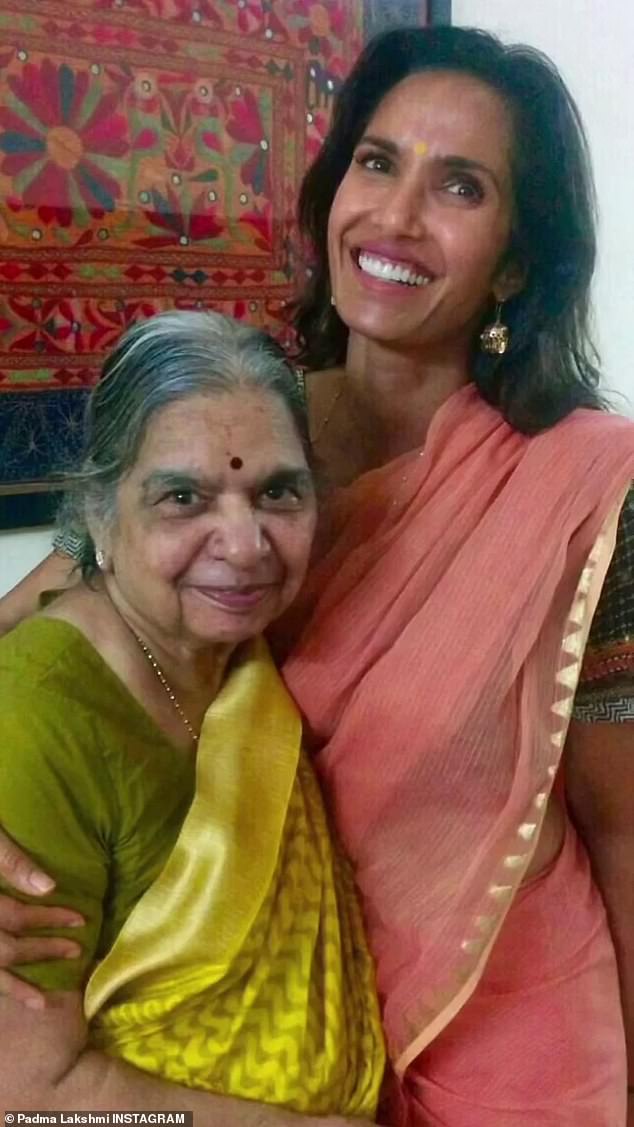 
A ‘heartbroken’ Padma Lakshmi has announced the loss of her grandmother Rajima.

Lakshmi, 51, paid tribute to her grandmother on Sunday with a slideshow of images and a lengthy message reflecting on the woman who was ‘much more than a grandma.’

In her Instagram post, Padma recalled being taught times tables by Rajima, getting her ears pierced by her, and her many professional accomplishments.

‘She was my rock and my example’: A ‘heartbroken’ Padma Lakshmi has announced the loss of her grandmother Rajima

‘I am heartbroken. My dear paati is gone,’ Padma posted on Instagram. ‘Rajima lived life serving others. She raised us all. She was my rock and example. She was much more than a grandma, the only one I knew. She helped raise me, my whole childhood whenever my mom needed a break.

‘I wouldn’t have the career I have without her guidance. But more importantly, I would never be who I am without her love & care. She didn’t just teach me about food, but about life, often through food. She was practical, humble, disciplined. She taught me to work hard and never, ever feel sorry for myself.

‘She oiled my tangled, lice ridden hair, pierced my ears by hand with a sharp reed, taught me times tables, how to temper spices, and that everything and everyone has their boiling point. She patted me to sleep, woke me in the morning, soothed me when I got thrashed by Tha-Tha.

‘She coaxed my breast milk back with her kitchen remedies when I called in a panic from NY. She also knew when to shut down my navel gazing. “Aiyoo, poorum” she’d say now, rolling her eyes. 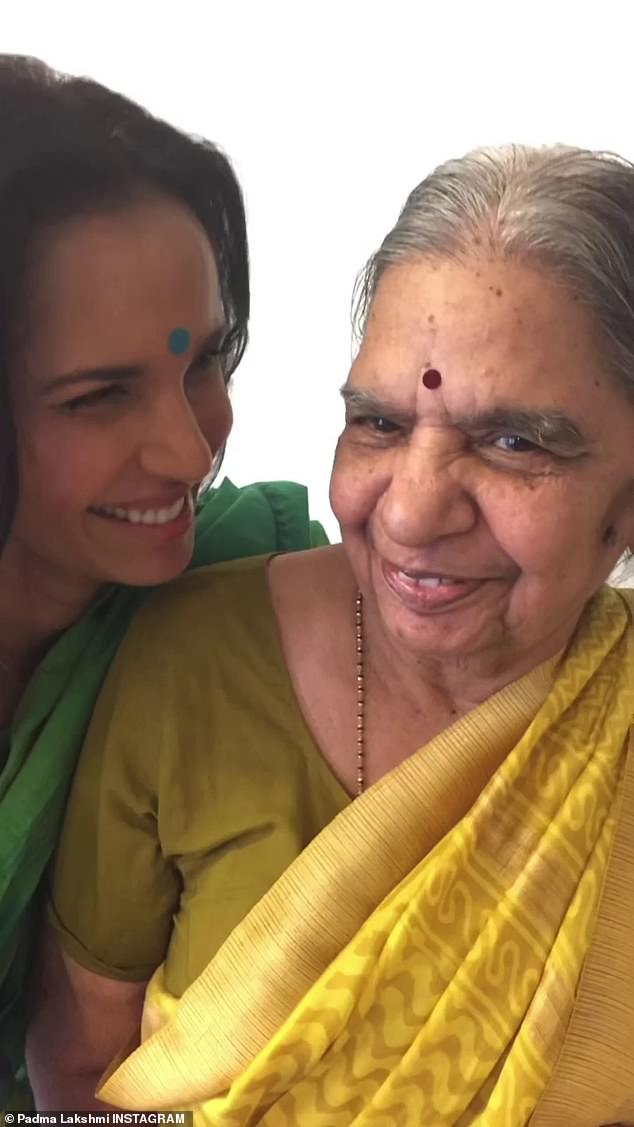 ‘I am heartbroken’: Lakshmi paid tribute to her grandmother with a slew of images on Sunday 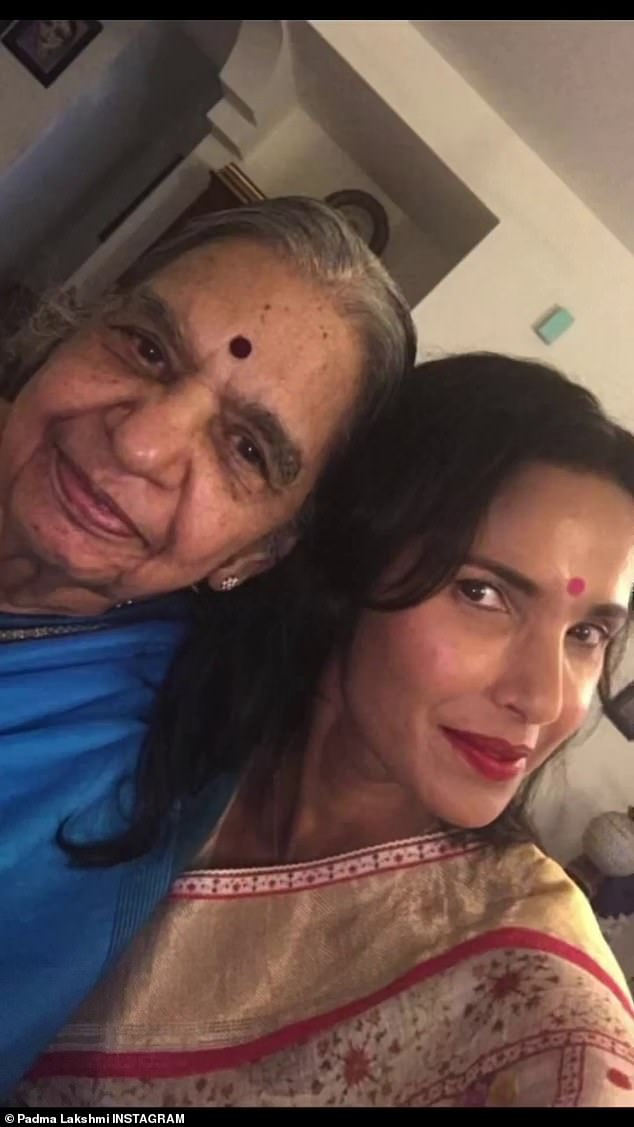 Integral: The Top Chef host described Rajima as ‘much more than a grandma’ 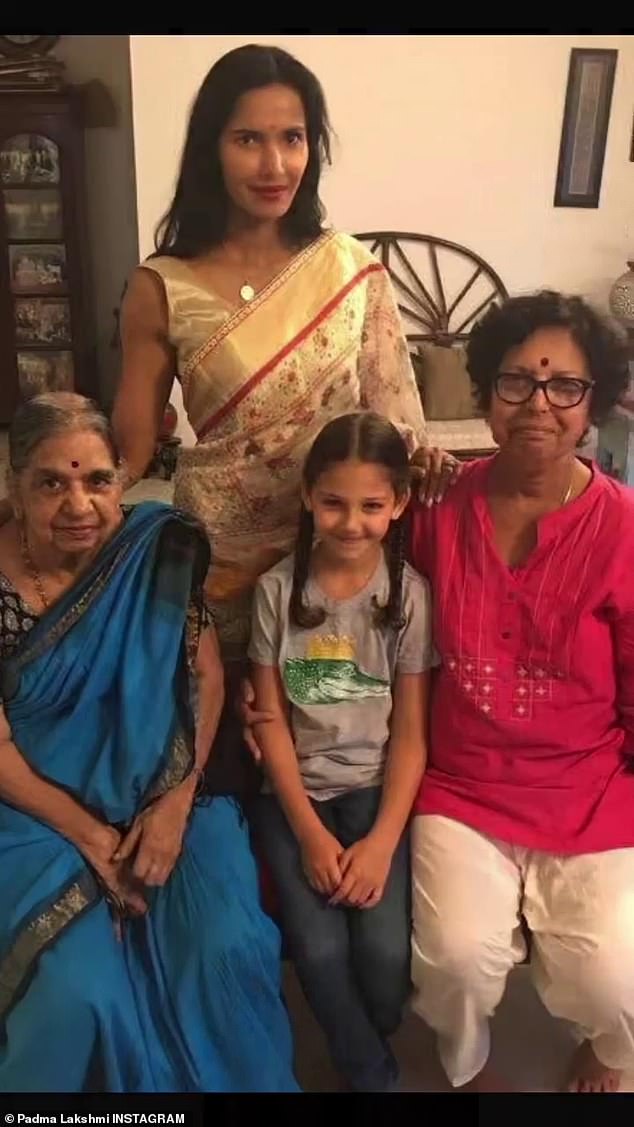 Family reunion: Lakshmi included images of her grandmother with her daughter Krishna

‘Rajilakshmi Krishnamurti started the first Montessori school in Tanjavur and was a teacher for 20 years in DTEA and MEA, Delhi. She worked at Asian hospital in Madras, went to slums in a mobile vax unit treating thousands of kids. Finally she helped set up at an orphanage in Besant Nagar, all while raising 4 kids, 6 grandkids, nieces, and younger siblings, too. For decades she cooked daily meals and tiffin for 8-10 on a 2-burner stove in govt housing.’

Padma also revealed she had traveled to India to be with her grandmother before her passing, where she thanked her ‘for a lifetime of teaching.’

‘You may recognize her from my cookbook cover, or in drawings from Tomatoes for Neela. These last 2 years so many have had such deep loss. I’m thankful for the privilege so many have not had. To say goodbye. Thanks to all those who helped me slip in and out of India against all odds before she passed. 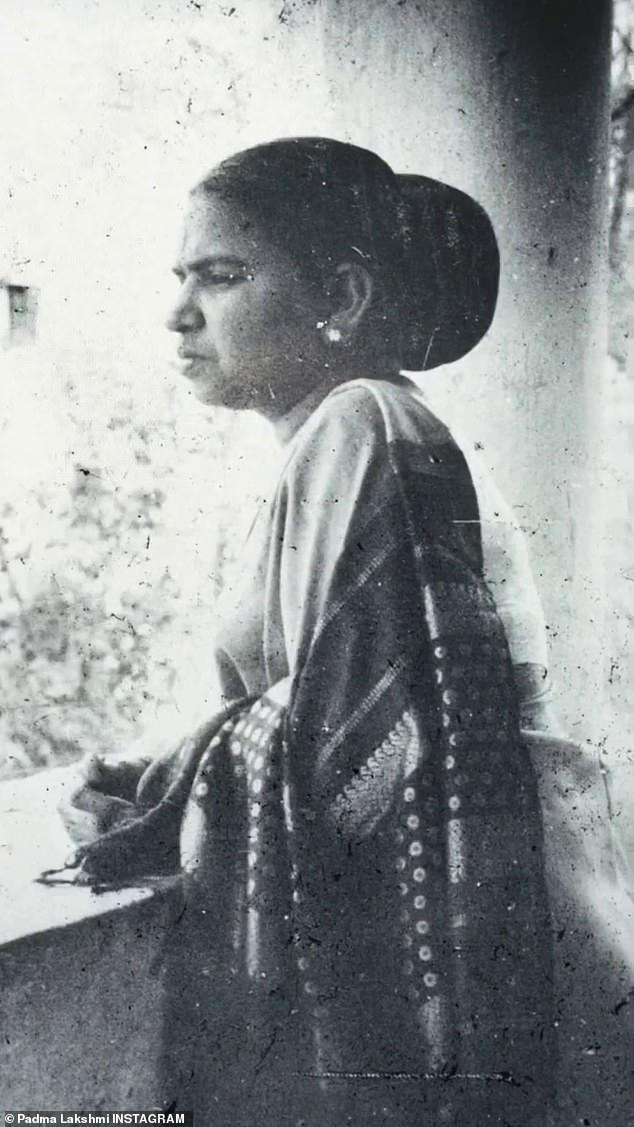 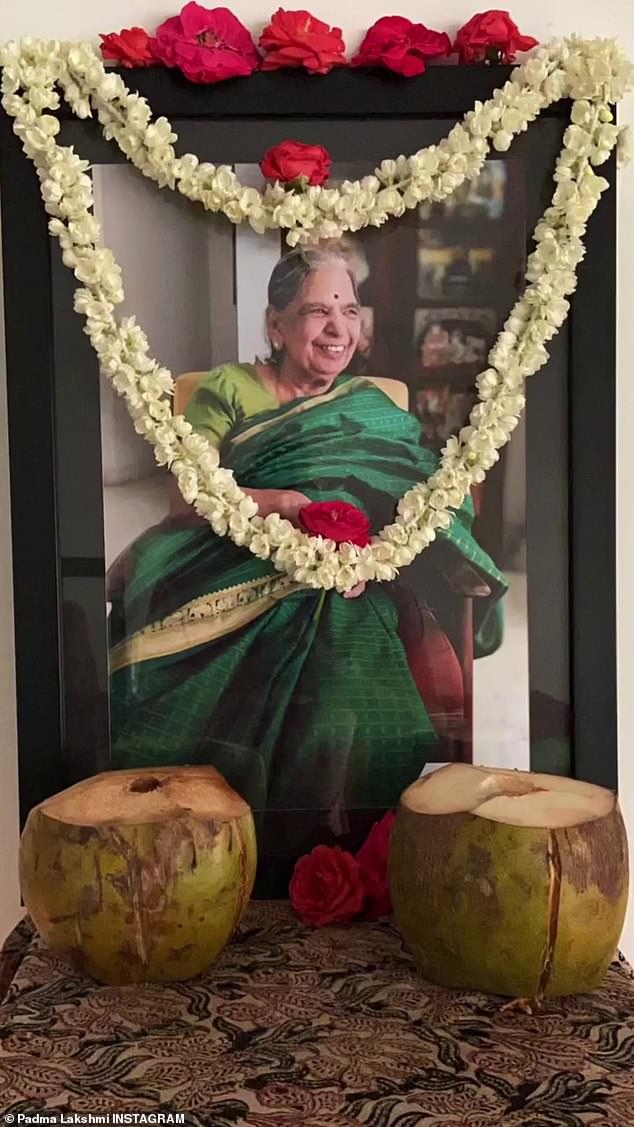 Accomplished: ‘She worked at Asian hospital in Madras, went to slums in a mobile vax unit treating thousands of kids,’ Lakshmi said of her grandmother 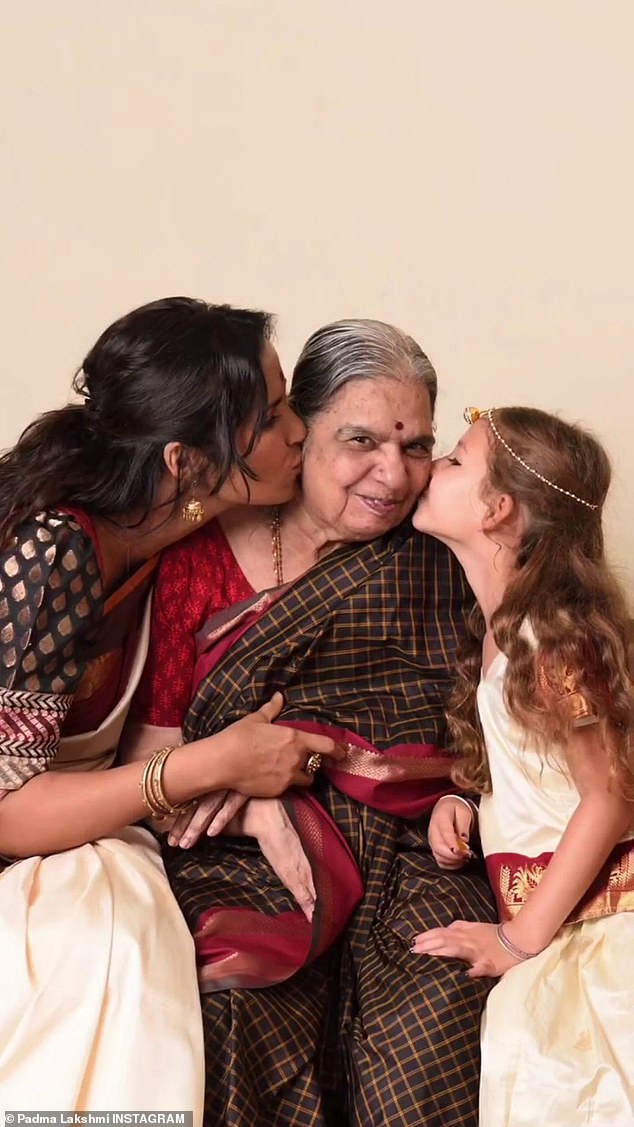 Aww: The superstar and her daughter both kissed Rajima on the cheek 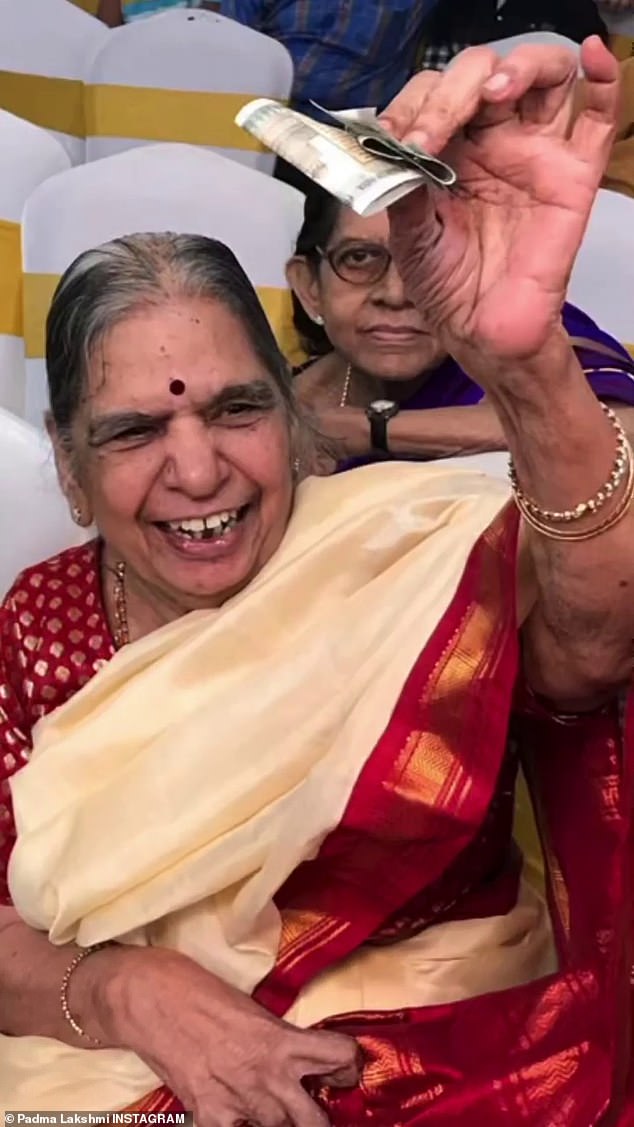 ‘She oiled my tangled, lice ridden hair, pierced my ears by hand with a sharp reed, taught me times tables, how to temper spices,’ Lakshmi said

‘I’ve had a crazy, exhausting, devastating week. I’m grateful she waited. Just like she always did on our veranda when I arrived back from the US. I met her knowing eyes, held her hands, rubbed her feet. I thanked her for a lifetime of teaching. Her gift. I was able to bear witness as she’d always done. She left us hours later. Elegant and patient with me to the last minute. I love you Jima, na poittu varren.’

Images included black-and-white photos of her grandmother as a young woman, and more recent family snapshots with her daughter Krishna.

In a 2018 interview with Glamour, Padma reflected on her grandmother’s definition of happiness.

‘I used to ask my grandmother, who is a huge mentor to me, about happiness. And she would always say that happiness to her was not a noun, but a verb. And that if she felt like she got everything done that she needed to do, then she went to bed happy.

‘That she was content that she went to sleep more accomplished than she got up that day. I think my definition of happiness definitely aligns with that.’ 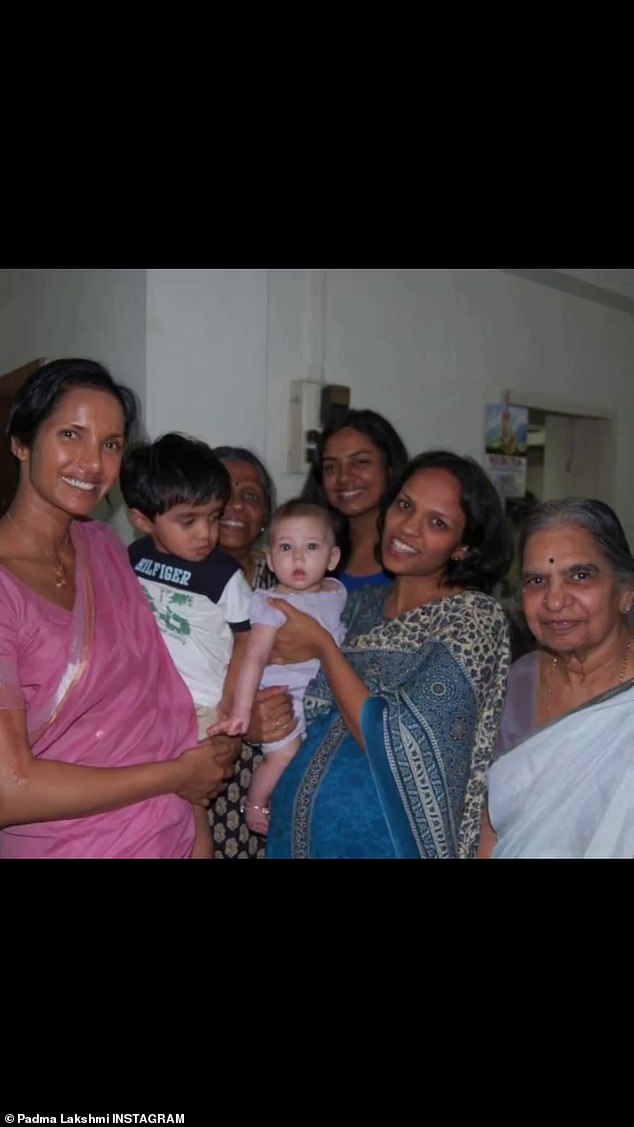 Memories: Lakshmi included a slew of family snap shots in her post 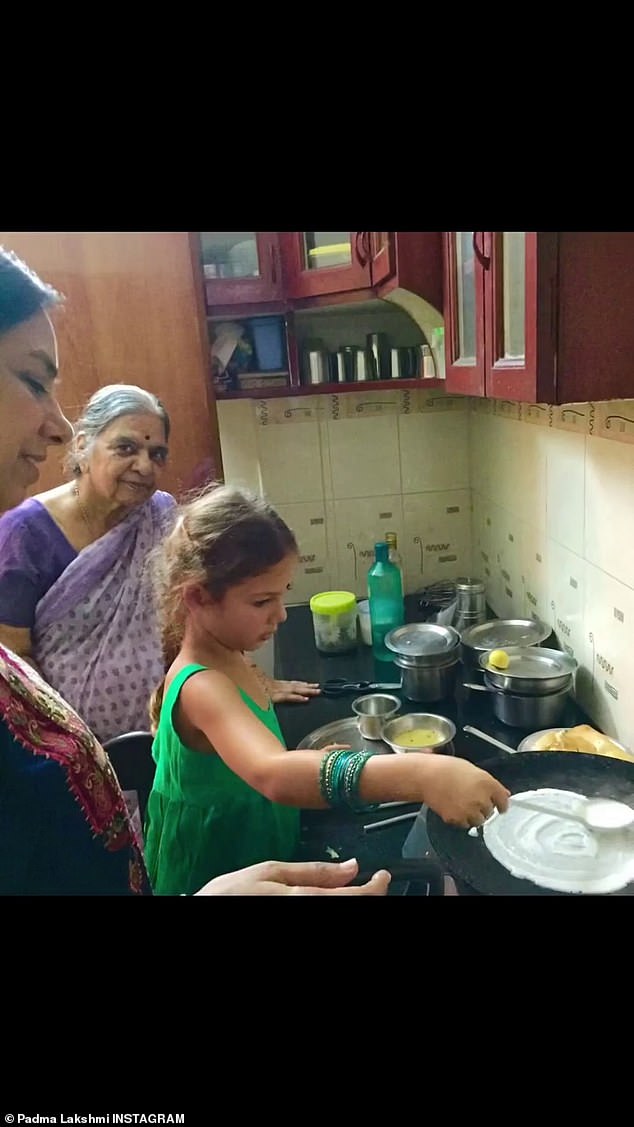 Rajima supervised as Krishna learned how to make a dish 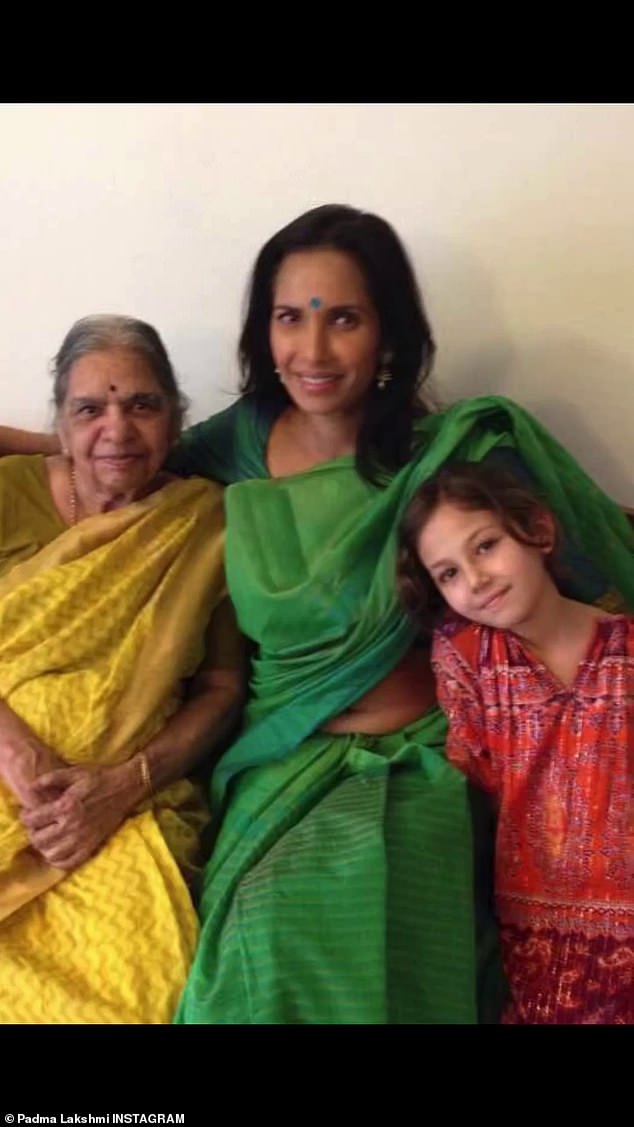 Three generations: Padma enjoyed some quality time with her daughter and grandmother 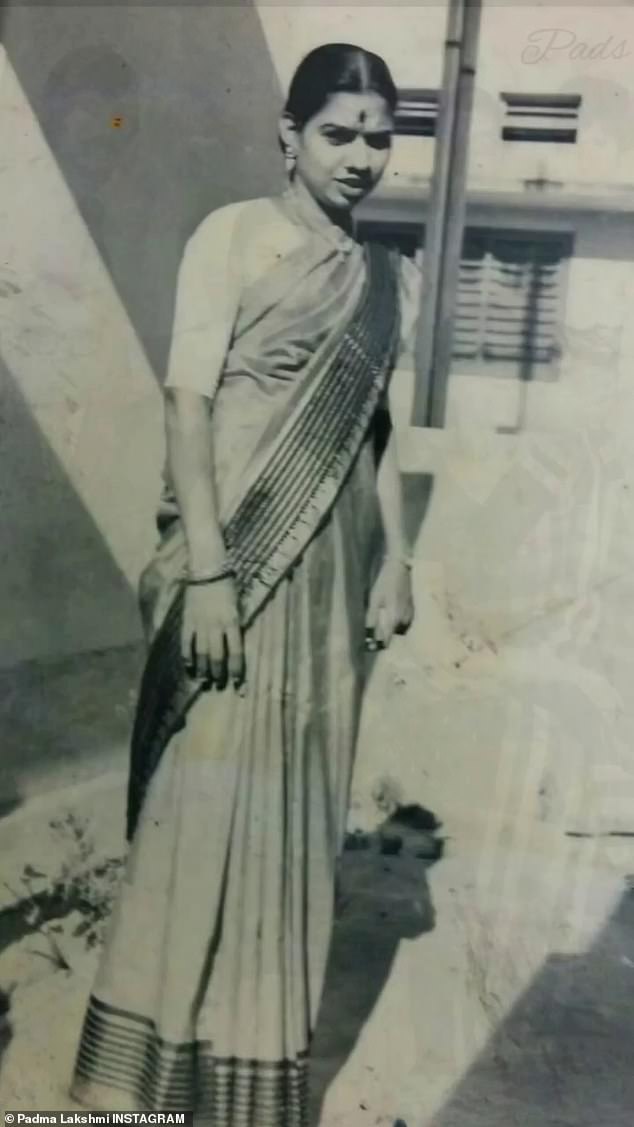 ‘She would always say that happiness to her was not a noun, but a verb,’ Lakshmi said in a 2018 interview with Glamour