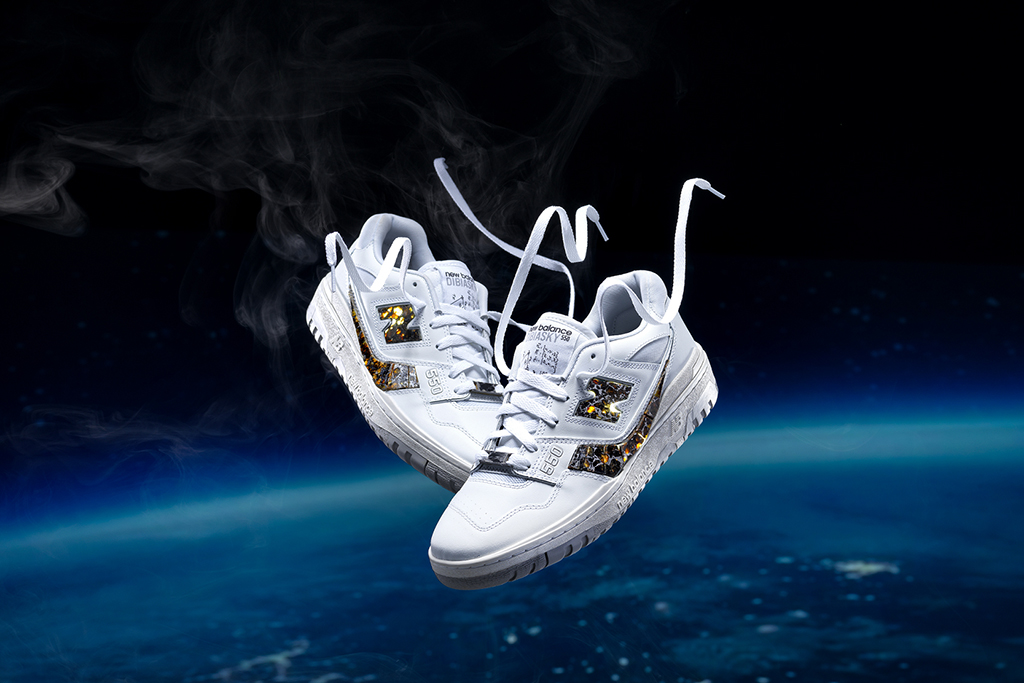 
Netflix and Sotheby’s have revealed a custom New Balance 550, created in celebration of the upcoming Adam McKay film “Don’t Look Up.” The shoes are made with fragments of pallasite meteorite spotted in the dry bed of the river Hekandue in Russia.

But the sneakers will be tough to get your hands on, as only one pair exists.

The sneakers, which were created by Matt Burgess of MattB Customs, feature fragments of the Seymchan meteorite that were cut using a high-pressure water jet. The fragments were cut to within a millimeter of Burgess’ design to fit to the contours of the shoe. There are 34 fragments of olivine and peridot crystals in the sneaker in colors that include emerald and amber. Breaking down the meteorite fragments further, a statement from the companies said the crystals “are the result of small chunks of the stony mantle becoming suspended in the molten metal of an asteroid’s iron-nickel core.”

Aside from the meteorite, the shoe also features metallic lace locks with latticework in a Widmanstätten pattern, which the statement said is a result of the meteorite cooling over millions of years and can only happen is in the vacuum of space.

The sneakers were created as a nod to Jennifer Lawrence’s character, Kate Dibiasky, who is an astronomy grad student in the film. According to a statement, Dibiasky, alongside professor Dr. Randall Mindy — played by Leonardo DiCaprio — discover a comet that’s on a collision course with Earth. The Seymchan meteorite used on this custom New Balance 550, according to a statement, was born 4.5 billion years ago in the core of a comet or asteroid, which is similar to the fictional Dibiasky Comet in the film.

The sneakers will drop via Sothebys.com at 12 p.m. ET on Dec. 17 for immediate purchase on the auction house’s Buy Now platform.

“It’s not every day we have the opportunity to offer a one-of-one pair of sneakers that technically date over four billion years old. At Sotheby’s, we’ve had the extraordinary pleasure to offer some of the most amazing and special sneakers ever created, but few can rival the uniqueness of this incredible pair. We look forward to bringing this incredible item to market,” Sotheby’s head of streetwear and modern collectables Brahm Wachter said in a statement.