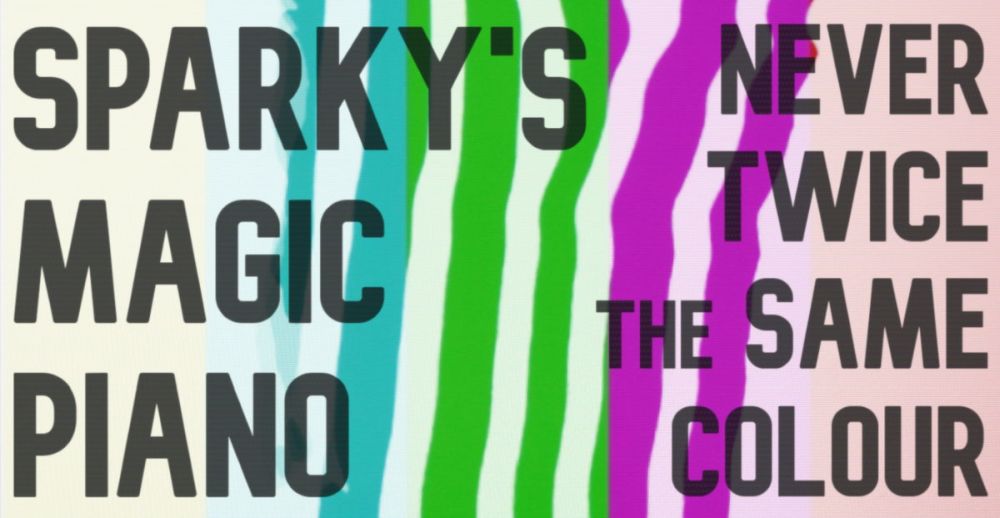 
In the visual art world, the term “folk art” refers to a type of outsider art that’s usually home made and serves a practical purpose, but doesn’t necessarily refer to the mediumor genre. Being quite far from anything definitively “folk” in terms of music, London-based indie pop duo Sparky’s Magic Piano seem nonetheless a sort of muiscal version of folk art. From their quirky name to their eclectic style to the fact that their music is sort of sewn together from home using any and all available instruments, has that sort of family art project vibe. Their second LP, Never Twice the Same Colour, released just this past Friday, September 9, show home made can be just as good as anything from the studio.

We all know the story of Billie Eilish and her brother Finneas O’Connell writing and recording Billie’s first album and all their prior singles in the back bedroom of their childhood home, not to mention nowadays any electronic producer knows that the next big banger can come through someone’s shitty laptop. Quality music almost never requires big studios and lavish equipment anymore. That’s not quite what we’re looking at with Sparky’s Magic Piano. While the work itself sounds quite professional, with good sound design, a hint of electronica and deceptively complex composition, the style of the music itself conjures quaintness.

The main style listeners will notice when getting into Never Twice the Same Colour is a sort of popified psychobilly/beach rock, similar to what was popular in both the UK and US around the late 80s/early 90s with intro tracks “Shiny Shiny Shoes” and “A Pair of Keys.” Fans of this sort of pre-Oasis rock period will catch lashings of R.E.M., The Pixies, The Cramps, Flaming Lips and even some early MGMT. There is of course the undeniable correlation to 60s surf rock acts like The Beach Boys as well. The minimal guitar work from Oli Bartlett is defintiely more of a 90s ilk, however, and compliments his wife Marion Bartlett’s whispy, Angie Hart-from-Frente! or Leigh-Nash-of-Sixpence None the Richer-esque vocals. More modern vocalist equivalents might be Birdy or Phoebe Bridgers, but these tracks are just so spot-on 90s, one must pay homage to the whispy vocalists of the past as well.

Further on in the album, things get a little deeper and heavier with tracks like “Colette” and “Hanging for the Bang.” With heavier, more shoegaze-inspired guitars and complex composition like the jazz trumpet in “Colette” and the orchestral arrangements in album closer “As Good as It Gets” start to really take Sparky’s Magic Piano away from bedroom band to playing around with synths to actual indie pop powerhouse.

Said synths do make a bigger appearance in the second half of Never Twice… as well, but in contrast to their first album Feel the Beat and Do it Anyway! which released almost 15 years ago, synths here are used for harmony and as part of the sound design rather than being front and center. That harmony is key to the husband-and-wife duo’s richer sound, taking a page from the mid-90s wall of sound bands like Lush, Sonic Youth and Catherine Wheel. Meanwhile the synths, flute and glockenspiel, yes, you read that right: glockenspiel, are ornamentation that serve to modrenize the sound, a’la The Polyphonic Spree or Arcade Fire. When listening to tracks like “NTSC” or “Permanent Pen,” in fact, it will be difficult to believe these big sounds come from just two people.

So where’s the piano in all this? Sparky’s Magic Piano may seem like a strange name for a project which contains only one song with a recognizable analog piano track, after all. The band actually take their name from a series of stories put out on vinyl by Capitol Records in the 50s and 60s, featuring a character created by the label named Sparky. There was also the 1987 animated film of the same name, voiced by famous actors like Vincent Price and Cloris Leachman.

Trivia aside, the name Sparky’s Magic Piano is another bit of tongue-in-cheek folk art for this duo whose current sound is anything but folksy. Since, in the album’s title Oli and Marion declare that they’ll have Never the Same Colour Twice, no one can predict that the quirky couple will continue with this exact sound, but with the rich and diverse style contained in this album and the evolution from their first work, it would be fair to say it can only get better from here. Let’s just hope it doesn’t take another decade and a half until album three is out.

Never the Same Colour Twice is out now and can be streamed on Spotify or purchased on Bandcamp.