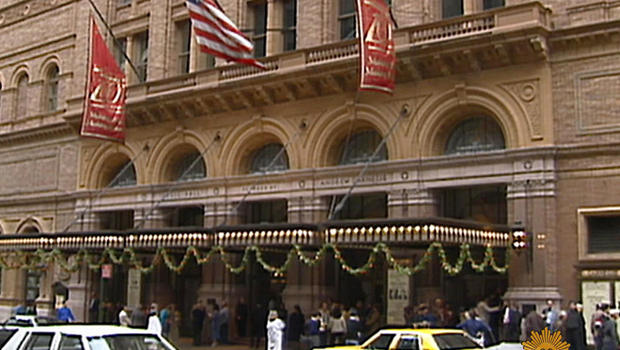 
Musicians will rally Monday outside Carnegie Hall for a fair contract with Distinguished Concerts International New York, a for-profit company that holds most of its concerts at the celebrated venue. The rally will start at 6 pm ET.

DCINY’s orchestra formed a union with Local 802 of the American Federation of Musicians more than two years ago, but DCINY “has essentially locked them out and refuses to offer industry standards like union wages, proper rest breaks, health insurance, retirement payments, recording or streaming payments, job security, a primary hiring list and more,” the union said in a statement.

DCINY has operated as a producer and presenter of music at Carnegie Hall and Lincoln Center for more than a decade. For many of its choral concerts, it assembles choirs of amateur singers from around the world who pay a fee to perform there. DCINY then hires a professional orchestra, soloists, and conductors.

An invoice from 2018 (read it here) shows that Francis Howell North High School in Saint Charles, MO, paid $37,920 to give 48 of its students the opportunity to receive instruction and to sing at Carnegie Hall. With another $7,900 for 20 VIP Patrons, the total bill came to $44,240. Such pay-to-play arrangements are not illegal, however.

Shut down during the pandemic, DCINY resumed live performances earlier this year, and according to the union, “immediately replaced the full professional orchestra with just a handful of musicians. The company also attempted to replace professional musicians with an amateur high school ensemble. At a recent negotiation session, management introduced a new proposal that would force musicians to audition for positions they’ve already been awarded, which could allow musicians to be replaced permanently.” Musicians responded with protests and demands for a fair contract.

Deadline reached out to DCINY but has yet to receive a response.

“An injury to one is an injury to all,” said Local 802 President Tino Gagliardi. “We must stand up for professional standards, especially when an employer hires musicians to perform at an iconic major venue like Carnegie Hall. We demand a fair contract for the musicians of DCINY.”

Said Local 802 Recording Vice President Harvey Mars, who also is the attorney leading the negotiations on behalf of musicians and the union: “Our demands are simply what every musician in NYC deserves. All musicians deserve professional standards. Unfortunately, we feel the company is retaliating against the musicians by replacing the full orchestra as we attempt to negotiate a fair contract. Shame on them.”

Violinist Tallie Brunfelt, a member of the orchestra and the negotiating committee, said: “This struggle isn’t just about our orchestra. This is about maintaining professional standards for musicians everywhere, but especially at a prominent venue like Carnegie Hall, which our company uses as a home base for its concerts.”

Percussionist Andy Blanco, who performs in the orchestra and serves on the musicians’ negotiating committee, said: “While we enjoy the work of playing in this orchestra, it often involves unreasonably long rehearsals with inadequate breaks; intense, physically demanding performance days; and an atmosphere of fear due to frequent retaliation for voicing concerns to management. We do not have a contract, do not receive benefits of any kind, and have no guarantee that we will be hired for future engagements. To address these issues, we came together with the support of Local 802 to negotiate a fair collective bargaining agreement that allows musicians to express our concerns without fear of retribution.”