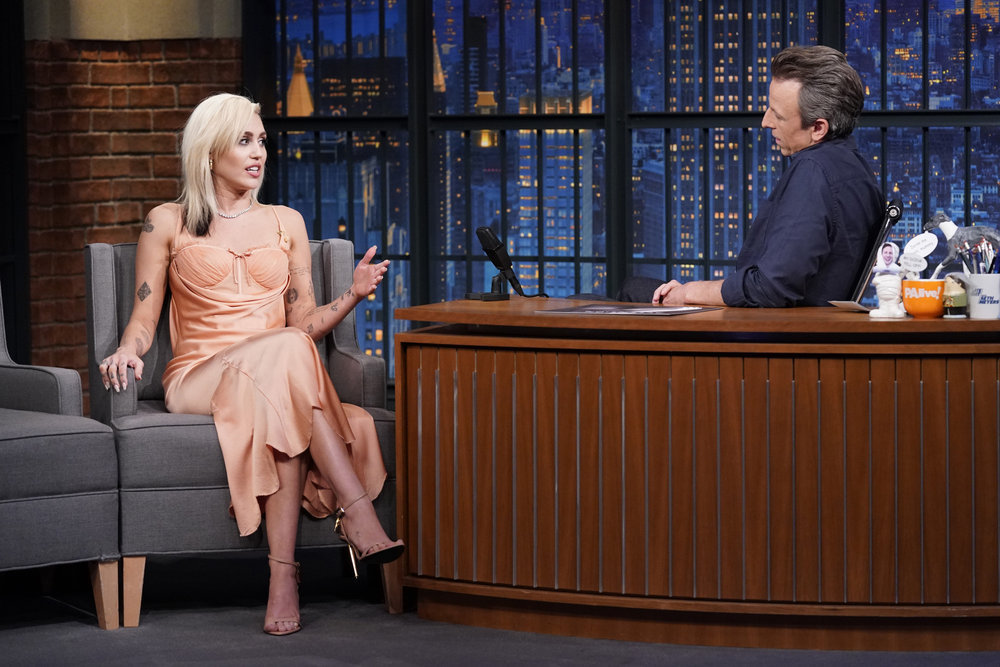 
Miley Cyrus looked to sleepwear for inspiration for her latest talk show appearance, arriving in silky style for an interview on “Late Night with Seth Meyers” in New York City.

While appearing on the show, Cyrus wore a peachy silk slip dress. With a scalloped hem and tulle bustier top, the piece was intently reminiscent of a luxe nightgown. Topping it off were silky bra-like straps and a delicate bow for further romantic inclinations. The “See You Again” singer’s ensemble was finished with a string of diamonds and gold huggie hoop earrings.

The singer’s outfit was in tandem with this season’s sleepwear trend, where dresses and separates with silk, lace and tulle accents — plus lingerie, nightgowns and underwear themselves — have shifted from the bedroom into everyday dressing. Earlier this month, “Gossip Girl” stars Zion Moreno and Savannah Smith epitomized the look in silky Intimissimi pieces for the brand’s Silk Collection dinner, proving romantic dressing is always in style. Julia Fox was also seen wearing Alexander Wang underwear at the grocery store this week, suggesting little else is needed to create a eye-catching look (though hers was layered with a denim blazer and boots).

During her chat with Meyers, Cyrus discussed her live album “Attention” and the return of her hit New Year’s Eve special — plus how godmother Dolly Parton sends her faxes. You can watch her full interview on YouTube.

Sleek sandals like Cyrus’ are also a top summer trend, due to their open silhouette and supportive straps. Pairs with metallic textures and tones, ranging from fully mirrored heels to multicolored palettes, have emerged in new styles by Saint Laurent, Kurt Geiger and Stuart Weitzman this season. She isn’t the only Disney alumni to sport a pair lately, either. Cyrus’ fellow teen star Selena Gomez stepped out in a set of Aquazzura’s mirrored stiletto sandals to deliver her opening monologue on “Saturday Night Live” this weekend, as well.

For footwear, Cyrus coordinates most of her pairs to her current musical aesthetic. Since the release of rock album “Plastic Hearts,” the “7 Things” singer has donned a range of platform boots and pumps — often accented with crystals, studs, or metallic hues — from labels like Versace, Saint Laurent and Alexandre Vauthier. She’s also been seen in sleek sandals and mules by Amina Muaddi and Giuseppe Zanotti. The star has been a longtime fashion industry star since rising to fame in the early 2000’s, even collaborating on a line of sneakers with Converse in 2017. Most recently, she’s starred as the face of Gucci’s newest fragrance, Gucci Flora Gorgeous Gardenia.

Click through the gallery to see Cyrus’ style transformation over the years.