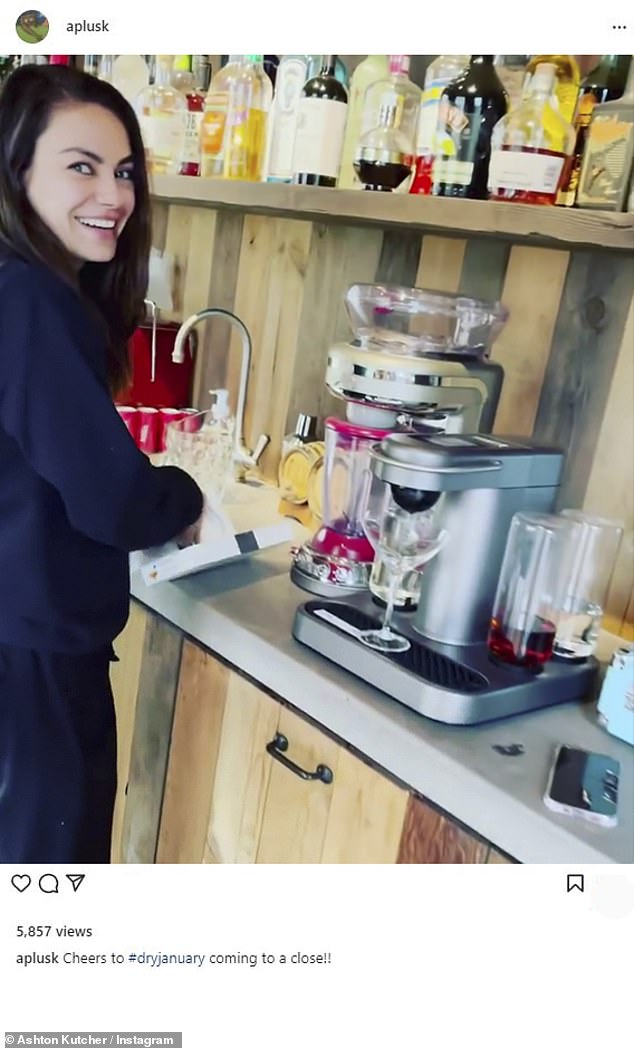 
Fans have quizzed Ashton Kutcher and Mila Kunis over an Instagram post the celebrity couple shared to his 4.4million followers, that showed the actress break ‘Dry January’ with a premium cocktail machine made by company she has invested in.

On Monday, Ashton, 43, posted a video of himself creeping up on Mila, 38, in a candid moment as she pulled out a box of cocktail mix pods for the pair’s Bartesian cocktail maker that retails for $489.

However, some fans were left wondering if it was an advertisement considering Mila is an investor in the company, which she joined last year after the brand received an investment of $20million.

‘Is this an ad?’ one fan asked in the comments, while another wrote: ‘Great marketing for the cocktail machine he’s an investor in.’

‘Is this an ad?’ Fans quiz Mila Kunis and Ashton Kutcher over ‘candid’ video that showed her breaking dry January with premium cocktail machine by new $20m company she invested in

Meanwhile, pop culture podcaster and influencer Amanda Hirsch shared an Instagram Story that suggested the post shared by the celebrity couple was a ‘low-key product promo’ adding: ‘F*** we are naïve!!!’

Another user pointed out that it was ‘a great promo’ for the company, that has previously been dubbed the ‘Peloton of home cocktails.’

It is not clear if the video was officially a sponsored post but DailyMail.com has reached out to representatives for both Mila and Ashton for clarification.

The Bartesian account also replied individually to comments from fans that were asking what brand of cocktail maker Mila was seen using.

The video starts with Ashton creeping up on his wife – who sits on the board of Bartesian as an advisor – sharing a seemingly candid moment with their fans.

Last April, it was announced that Bartesian had welcomed Mila Kunis to their board of advisors, after receiving $20million in funding. 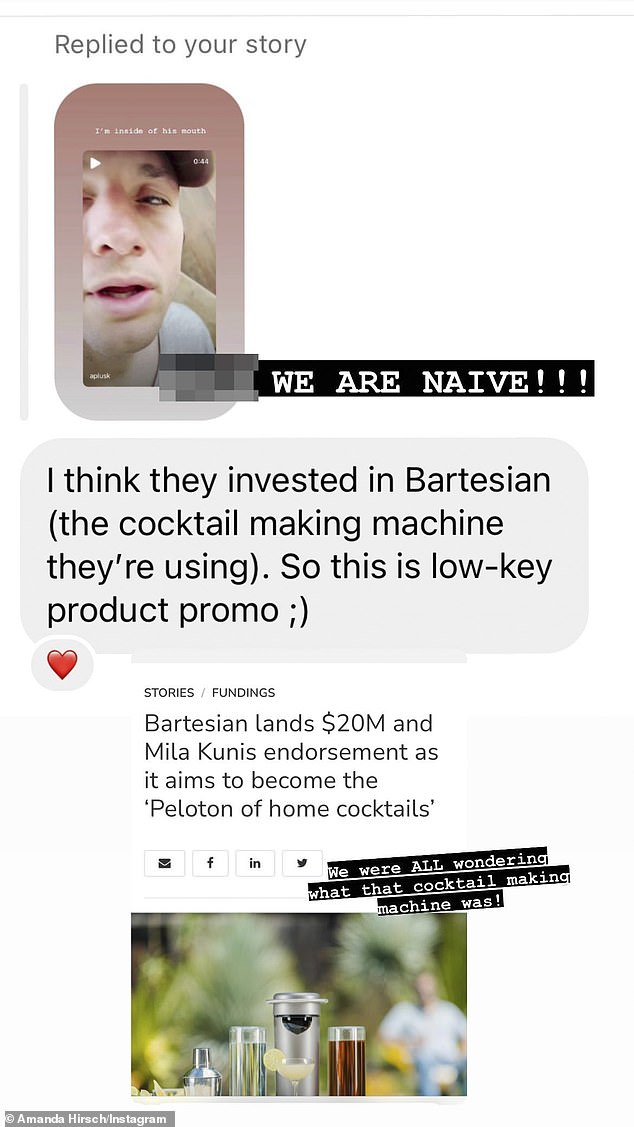 Pop culture podcaster and influencer Amanda Hirsch shared an Instagram Story that suggested the post shared by the celebrity couple was a ‘low-key product promo’ adding: ‘F*** we are naïve!!!’ 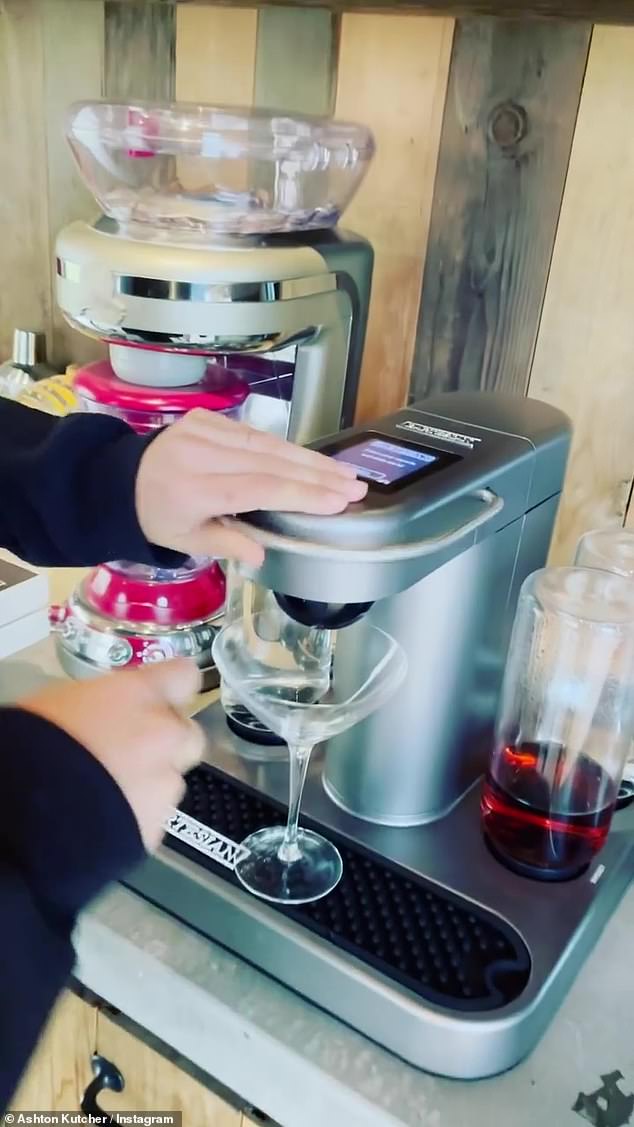 Determined: ‘Nope!’ Mila responded as she put the pod in the machine and pushed the button

Actress Mila was brought on ‘to provide guidance on brand strategy and growth,’ the company said.

As the clip continued, Mila – who is also spokesperson for Jim Beam – was seen crouching on the floor as she reached under the cabinet of their bar.

‘Baby?’ the Two and Half Men star called out.

As Ashton walked up behind her, he asked, ‘What are you doing?’ to which she replied, ‘Nothing’ as she pulled out a box of pods for the pair’s Bartesian cocktail maker.

‘What do you mean, nothing?’ he pressed.

Mila said with a laugh, ‘I’m making a cocktail.’

Quizzed: Some fans wondered if the video was part of an ad, while the brand Bartesian responded to those asking the name of the cocktail maker

‘Nope!’ Mila responded as she put the pod in the machine and pushed the button.

She giggled as she explained, ‘No, I work off the Lunar calendar so it’s Wet February for me!’

Ashton captioned the video: ‘Cheers to #dryjanuary coming to a close!!’

Last week, Kunis surprised fans when she teamed up with Demi Moore for a new Super Bowl ad for AT&T Fiber.

The ad saw Mila and Demi, 59, play themselves at their high school reunion.

The women both mistakenly believed they were about to be presented with the award for Most Admired Alum only for the superlative to be given to someone else.

The two women certainly do have a lot in common, as Mila has been married to Demi’s ex-husband Ashton since 2015. The couple share daughter Wyatt, seven, and son Dmitri, five. 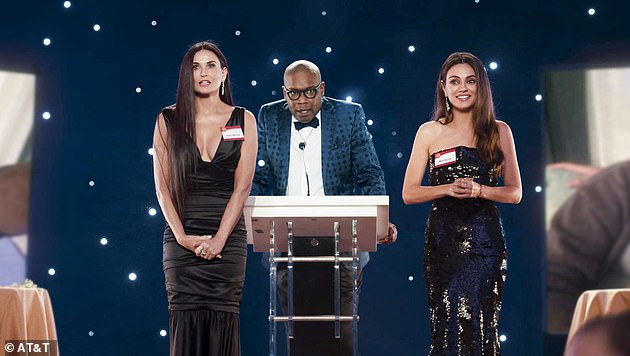 Surprising collaboration: Earlier this week Kunis surprised fans when she teamed up with Moore for a new ad for AT&T Fiber

Interestingly, not only do Demi and Mila share a connection to Ashton, but they both attended Fairfax High School in Los Angeles.

Speaking with ET Online, Kunis said she reached out to Moore as she drummed up ideas for the ad.

‘It was during my first collaboration meeting with AT&T that we discovered Demi was also a Fairfax High alum,’ she said.

‘I thought it would bring humor and laughs to what was already a great ad. I reached out to her and was so delighted she jumped on board.’