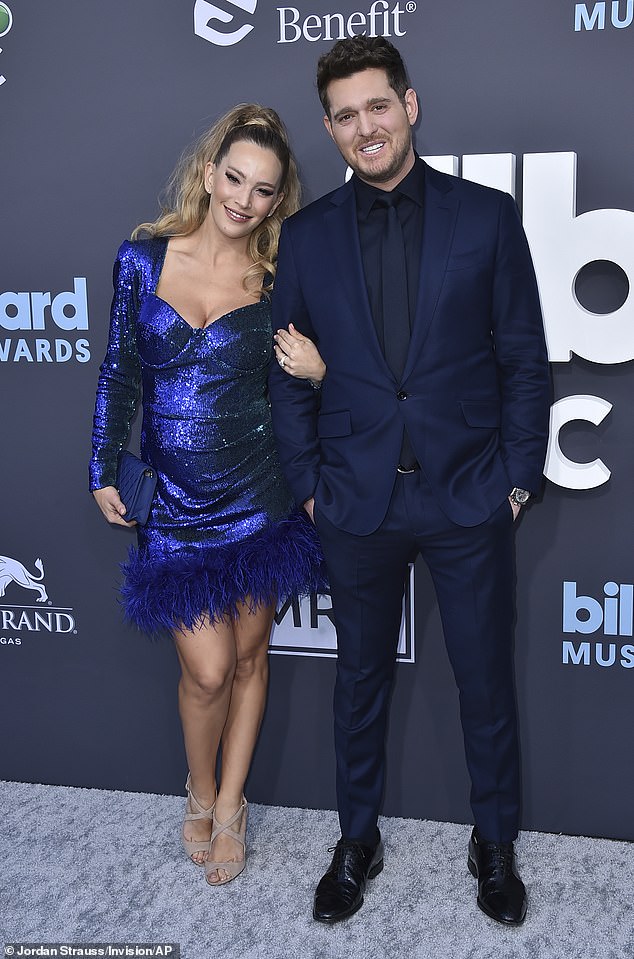 The singer, 46, and the Argentinian actress, 35, shared the happy news to Instagram on Friday.

The baby girl has been named Cielo Yoli Rose Bublé. They already have daughter Vida, three, and sons Elias, six, and Noah, eight.

A fourth: Michael Buble’s wife Luisana Lopilato welcomed their fourth child, they shared on Friday. The singer, 46, and the Argentinian actress, 35, posted the news on Instagram; seen in May 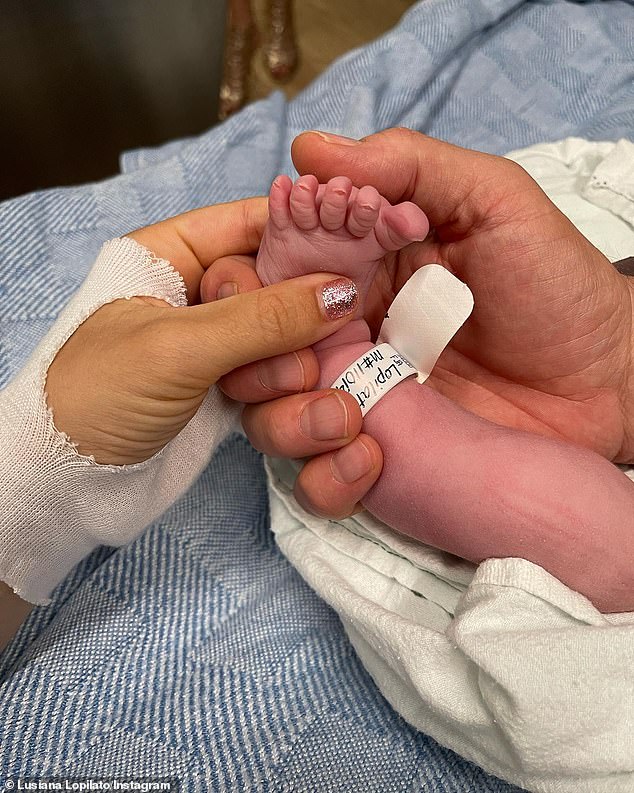 A first look: The baby girl’s foot was shown in this image as the parents held hands

‘From love comes life, light and her… our baby Cielo Yoli Rose Bublé. You finally arrived to our lives with your 3,8 kg!!!’

‘Thank God for this infinite blessing, we love you!! Noah, Elias, Vida and your mom and dad ❤️’

Buble and Lopilato became engaged in 2009 and were married two years later in 2011. 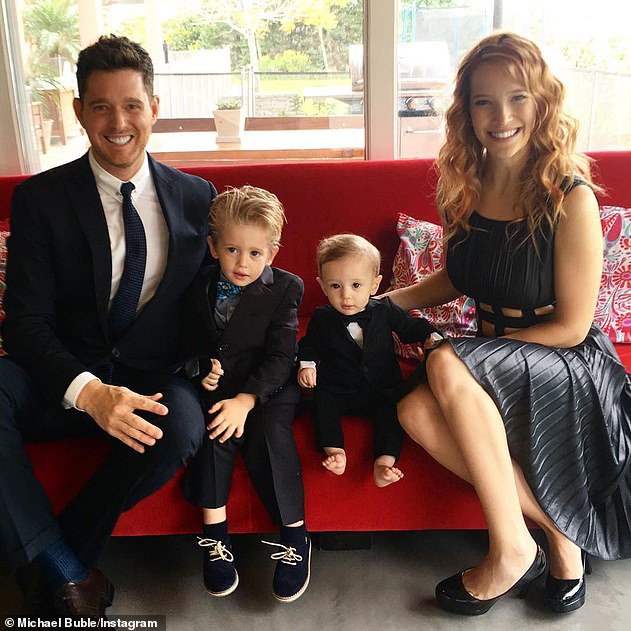 In February she showcased her growing baby bump in his new music video, I’ll Never Not Love You.

Luisana put her midsection on display as she left a grocery store with her husband, and their children at the end of the video. 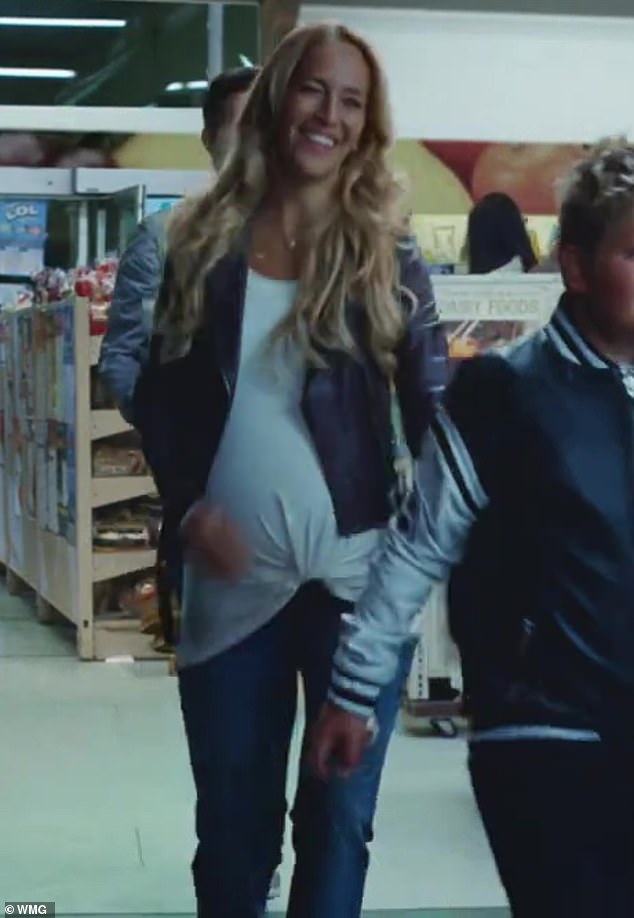 Luisana was heavily featured in her husband’s video as the two played famous couples in film, from Titanic’s Rose and Jack to The Notebook’s Noah and Allie.

Michael and his wife announced her pregnancy at the end of the video, where the singer snaps out of his daydream and is guided out of the grocery store by his pregnant wife.

Buble confirmed his expanding family during an interview with On Air With Ryan Seacrest on Tuesday. 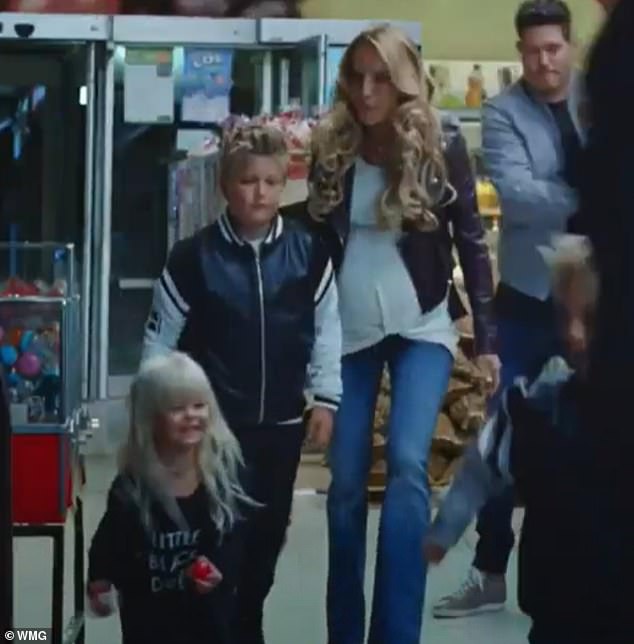 Family first: Luisana doted on her children as they left the grocery store

‘This will be the first time that I actually say these words, but yes, my wife and I are grateful to be expecting our fourth,’ Buble said.

News of the pregnancy broke on Monday after TMZ teased scenes of Lusiana and her bump from the video.

Michael tweeted of the new music earlier this weekend: “Haven’t Met You Yet” was the beautiful start of a true romance. 10 years later, the story continues in the extraordinary sequel “I’ll Never Not Love You” 2.22.22.’

On Instagram, he teased the new video by sharing a clip from his 2009 music video, Haven’t Met You Yet, which also starred his wife.

‘222 the #angelnumber represents love, companionship, a reminder that you’re on the right path. The story continues 2.22.22 #howitstartedvshowitsgoing,’ he captioned the clip. 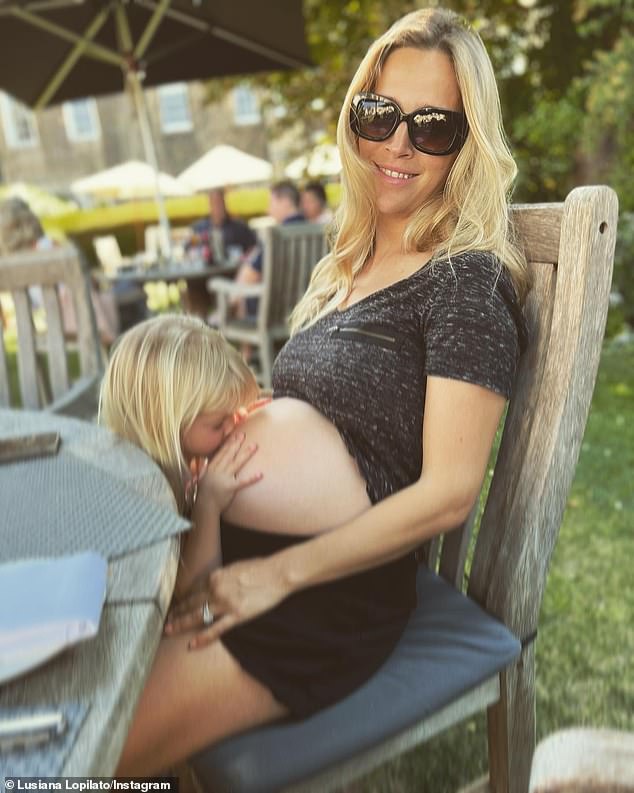 Before the baby arrived: The actress shared this image Friday of her daughter kissing her bump

Michael’s new video pays tribute to some of cinemas romantic moments, and the subject felt fitting for the couple.

Speaking with ET Online last month, he said: ’15 years ago, you saw that my wife had a song that I had written for her where I meet her in a grocery store, and it becomes this thing at the end of the song that it’s all just a daydream, and so I had this idea in the Michael Bublé cinematic experience, ‘Why can’t I make the sequel? Why can’t this be the sequel?’

‘So, at the end of the video, we find out that like M. Night Shyamalan, instead of I see dead people, we realize that once again, I have imagined all of this, I fantasized the whole thing.

‘My wife and I have gone through, I think, the most romantic parts of cinema and some of the greatest moments of cinematic history and pay tribute cause we love them so much, and we love each other and at the end of the video, you find out once again I’m daydreaming.

‘But the difference is now, the girl from ‘Haven’t Met You Yet’ video that was his girlfriend at the time, 15 years later, is his wife and they have three beautiful kids.’

Buble’s eldest son, Noah, was diagnosed with liver cancer in 2016, and has been in remission since 2017.

He told PEOPLE in December that he lives ‘a much deeper life now’ following his son’s cancer battle: ‘I don’t wish that kind of pain upon any human being, but I do feel that when you’ve truly suffered, when you’ve truly felt fear and loss, it allows you to live a deeper life.’