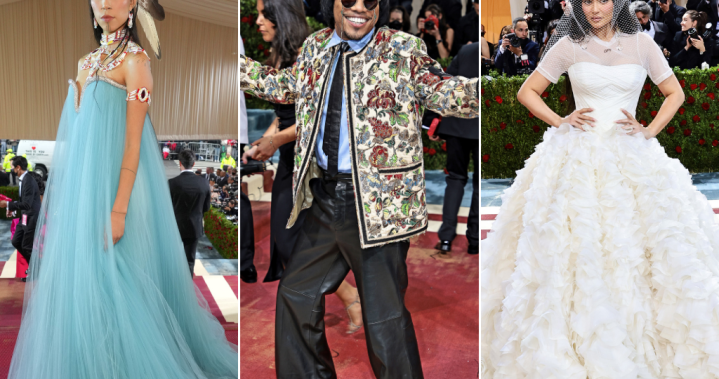 
On Monday evening, some of the biggest names in entertainment came together for the annual fundraising gala at the Metropolitan Museum of Art in New York City.

This year’s Met Gala theme is “Guilded Glamour” and carries a white tie dress code, meaning the fancier the better.

Vogue said the gala asked its attendees “to embody the grandeur — and perhaps the dichotomy — of Gilded Age New York.”

New York’s Gilded Age, in the later part of the 19th century, was a period of rapid growth – both in terms of financial wealth and architecture. Fashion at that time was also very busy – lots of fabric and frills and lace and bows.

And tonight’s stars did not disappoint. Anna Wintour, the queen of fashion and editor-in-chief at Vogue magazine, ditched her signature sunglasses for a tiara. Co-host Blake Lively wore a show-stopping reversible gown, and expectant parents Sophie Turner and Joe Jonas showed up in complementary black-and-white outfits.

Alongside all the luxe and glamour, the was plenty of fashion maximalism to go around.

There were also plenty of jaw-dropping looks that will be talked about for days and weeks to come.

Gigi Hadid wore a monochromatic ensemble that seemed to mimic the shape of the Met Gala stairs. Fashion entrepreneur Fredrick Robertsson looked like a giant, silver porcupine. And, of course, the presence of Pete Davidson and Kim Kardashian turned a lot of heads, even though their outfits were relatively tame.

Let’s round up some of the most fun, elegant, and outrageous looks of the night.

‘That ’70s Show’ returns for sequel with original stars, this time in the ’90s