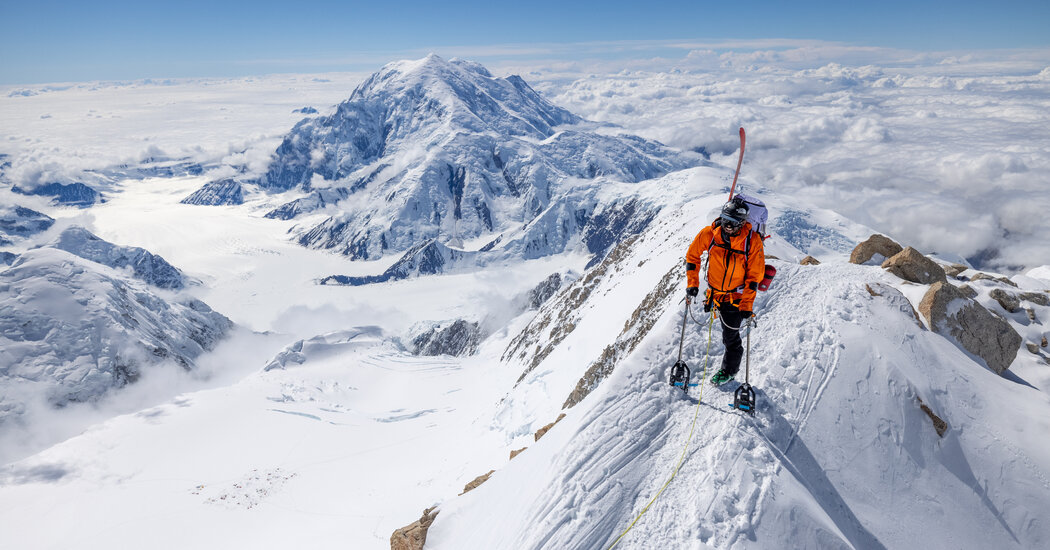 
Climbing and skiing Denali in Alaska, elevation 20,310 feet, is grueling. Mountaineers endure blizzards, high altitude and weeks in subzero temperatures as they slowly make their way up the highest peak in North America. Vasu Sojitra did it on one leg.

At the age of 9 months, Mr. Sojitra’s right leg was amputated because of septicemia, a blood infection. When he was 10, he saw an amputee skiing in Connecticut with two outriggers — short skis that are mounted on poles to assist in balance and turning — and begged his parents for a set. Ever since, he has pursued his outdoor passions in the wildest places and encouraged others to follow him.

In 2014, Mr. Sojitra climbed Wyoming’s Grand Teton peak (elevation: 13,775 feet) while using crutches. Last year, after completing the first disabled ski descent of the state’s Mt. Moran (elevation: 12,610 feet), Mr. Sojitra teamed up with Pete McAfee, another amputee, and skied what is believed to be the first disabled descent of Denali (there are no official records of adaptive ski mountaineering descents). Their feat was featured in the 2021 Warren Miller film, “Winter Starts Now.” In October 2021, Mr. Sojitra climbed Ecuador’s Cotopaxi volcano (elevation: 19,347 feet) with the Range of Motion Project, which raises awareness for disability rights and prosthetic care.

Mr. Sojitra, 30, said his mission is to make the outdoors more inclusive and accessible. He co-founded Inclusive Outdoors Project, which promotes outdoor sports and holds clinics by and for people with disabilities, people of color, and members of L.G.B.T.Q. and other communities often shut out of participation. He is one of just two adaptive athletes to represent The North Face, the outdoor gear brand, and appeared with other underrepresented outdoor athletes in the independent film, “The Approach.”

Mr. Sojitra, a professional athlete and a disability access strategist, was interviewed from his home in Bozeman, Mont. The conversation was edited for length and clarity.

Why do you do ski in the backcountry?

It’s a way of building community and connecting to the landscape that I’m on, especially now as I’ve learned more about Native issues and culture. That’s what creates joy for me.

Ski films are not known for their diversity. What difference do you think it makes for your descent of Denali to be in a Warren Miller movie?

There are so many people of color and disabled folks and folks within the L.G.B.T.Q. community who take part in all of these sports but their stories are not being shared. That’s why I keep doing this and why it’s important to showcase something as outrageous as skiing Denali and know that even disabled folks are out here doing this.

On Denali, you had to haul yourself up the mountain by your arms while pulling a 70-pound sled with food and gear. What was it like for you?

At the summit of Denali, which is over 20,000 feet, it feels like you’re breathing through a coffee straw. Breathing and moving is super heavy and hard, like walking through concrete. But the views are indescribable. You just feel so small next to all these massive bergschrunds and crevasses and overhanging glaciers and massive cliff bands. I felt very humbled by the landscape.

Crevasses and hanging glaciers can also kill you. Were you afraid?

It’s scary to have the potential of death. But it’s mostly knowing that when we die, people who we love are going to miss us. One thing I don’t want to do is let them down in that sense.

What did you feel when you stood on top of North America?

Me and Pete (McAfee) walked to the summit together. We were super happy, crying and hugging each other. We were dancing around and waving a pirate flag (a black flag with a skull and crossed swords).

What did the pirate flag represent?

Just me and Pete both being amputees. It’s kind of the ironic version of us being pirates because we both have amputations — like a pirate with a pegleg.

What made you cry on the summit?

Summiting Denali was a combination of everything my body was capable of in the mountains and in our world. The amount of effort we all put into being able to be where we’re at — it was super powerful. I feel very honored and privileged and grateful to be in that space and to be able to have that access as a disabled person.

Starting your descent, did you feel that you were making that first turn off the summit for others?

Very much. I know I stand on the shoulders of giants. Skiing the highest peak in North America symbolizes what is possible when you’re provided access and opportunity, especially as a marginalized person who is looked at as “other” or pitied as a disabled person. The fact that we were able to accomplish this shows that when people are provided access to these opportunities, we are able to achieve these amazing successes. I definitely had a smile on my face, even through my frostbitten nose and fingers.

What are the obstacles to participating in the outdoors?

It is access to resources and opportunities, whether that be transportation, scholarships or mentorship programs, or just ways in which we can incorporate different cultures into a very homogeneous space. Addressing all these things can help not just one community, but all communities. Everyone has different issues and oppressions that impact them, even if you’re a white person.

What is your goal with the Inclusive Outdoors Project?

We are working to provide affinity spaces within mountain sports primarily in backcountry skiing, ice climbing, mountaineering, rock climbing, and trail running for folks with marginalized identities — communities of color, communities with disabilities, queer communities. We’re trying to create these more intentional spaces that are centered around these communities and get them more involved in the sports that I love. The idea is to just expand that population and opportunity and provide mentorship and growth for these communities that have usually been left out of the mainstream outdoor narrative.

What is the takeaway from your experience?

I hope to inspire people to break down barriers so I’m not the only person doing first disabled descents on Denali and other summits. I want to help inspire people to show up not just for themselves, but for others.

David Goodman is a journalist and author of “Best Backcountry Skiing in the Northeast” (AMC Books) and host of The Vermont Conversation, a public affairs radio show and podcast.