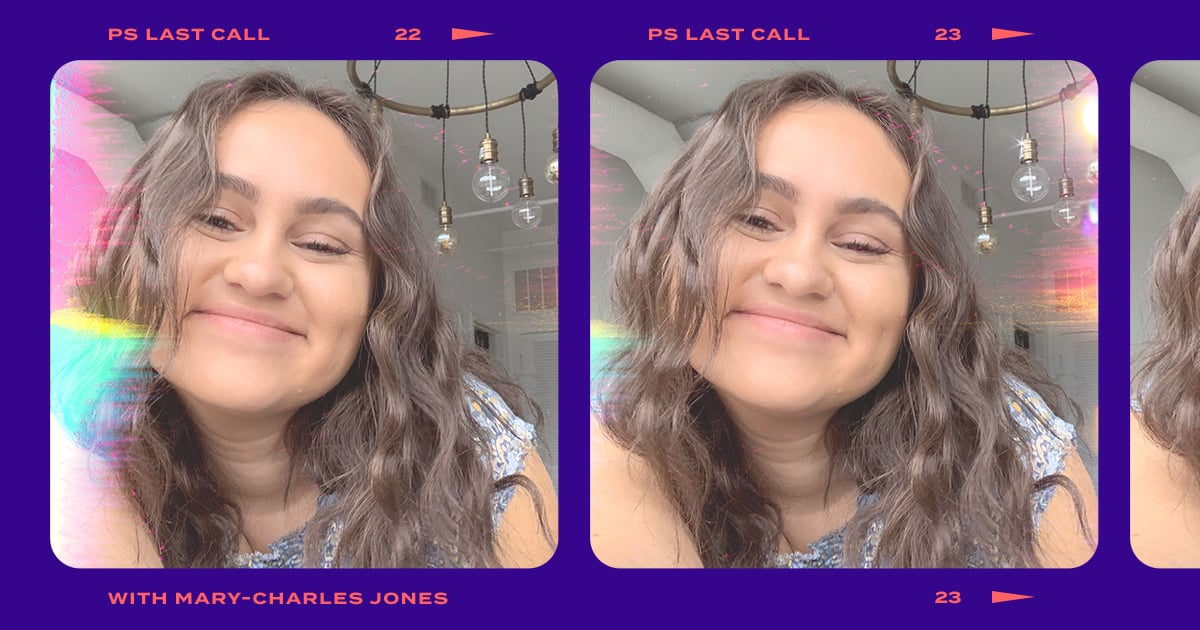 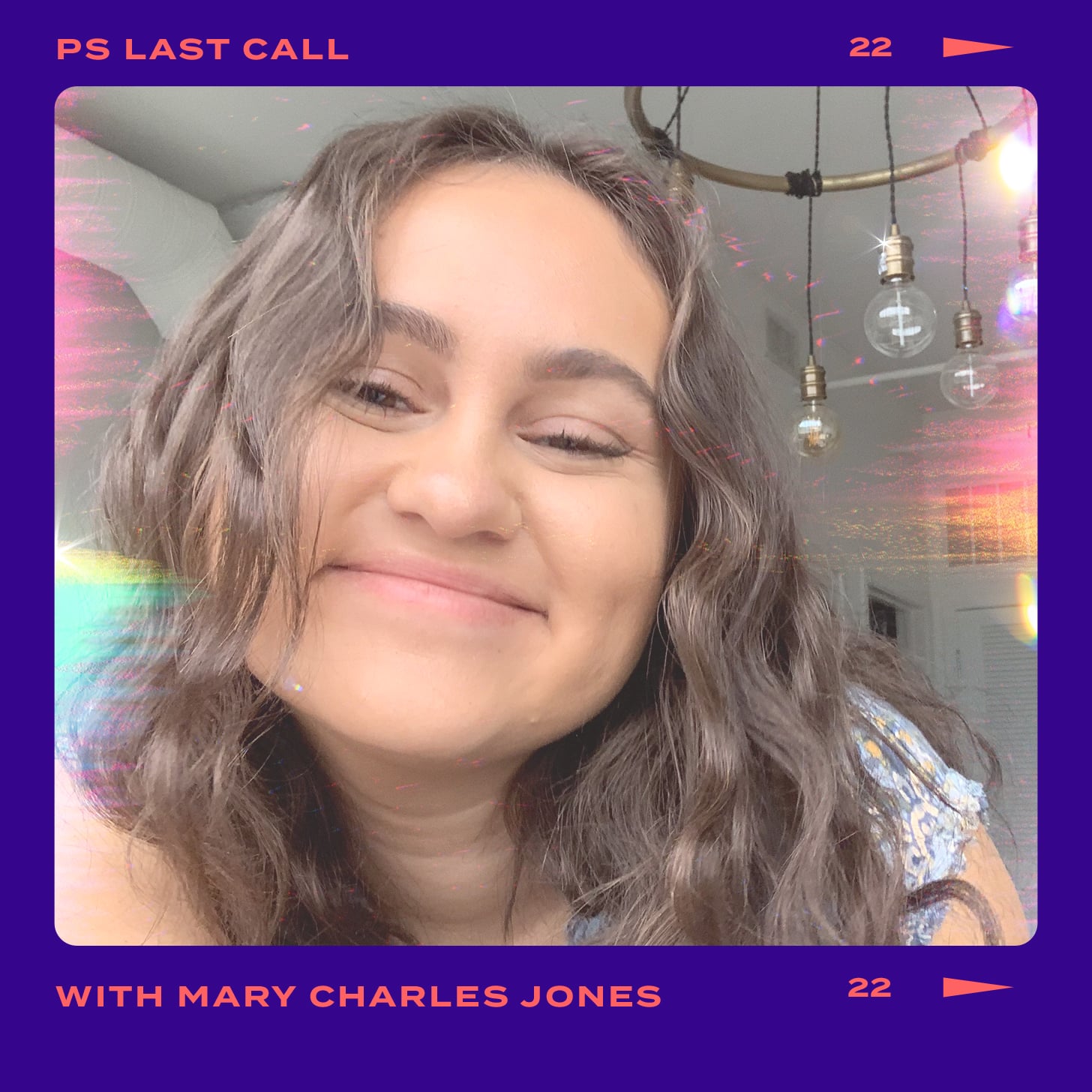 In our Q&A series Last Call, we get down to the bottom of every last thing with some of our favorite celebs — from the last time they were starstruck to the last song they listened to. This week, Mary-Charles Jones takes our call.

“To get the chance to do something with [Ava DuVernay] and getting to see firsthand why she’s so well-respected and why she is such this powerhouse of a woman, has been amazing.”

When Mary-Charles Jones booked the role of Annabelle in The CW’s “Naomi,” the first thing she did was run to her nearest comic book store to pick up a few copies of the fairly new DC comic series. “The girl at the comic book store was like, ‘Did you know they’re making this into a show?’ I was like, ‘Oh, I had no idea,’ and I just kind of walked on out,” Jones tells POPSUGAR. And, speaking of booking roles, it was none other than “Naomi” co-creator and executive producer Ava DuVernay who delivered the exciting news. “To get the chance to do something with [Ava] and getting to see firsthand why she’s so well-respected and why she is such this powerhouse of a woman, has been amazing,” she says. “Her crew is truly getting work done, but it also feels like they want the show to do just as well as the person who wrote it.”

“Naomi,” which follows the titular character as she as she pursues “her hidden destiny,” marks Jones’s first time playing a character that is fully formed. The 21-year-old star credits DuVernay for allowing her the space to be able to flesh out her character Annabelle’s backstory as it relates to Naomi (Kaci Walfall) discovering and understanding her superpowers. “They have their own struggles,” Jones adds, noting that none of the characters in the show exist solely as Naomi’s sidekick.

The DC drama hasn’t been renewed for a second season yet, but if it does, Jones would love to see Annabelle interact with a few of the other-worldly people, including Dee (Alexander Wraith), from Naomi’s universe. “Annabelle has such a funny, say-whatever’s-coming-to-mind personality that I’m sure would lead to a lot of good conversations,” she explains. Though the comic book series from creators Brian Michael Bendis and David Walker serves as the foundation for “Naomi,” Jones promises there’s more to explore in the new DC Comics adaptation. “[Because] there wasn’t a lot of source material for a lot of the characters, we’re given the ability to build the house from what they’ve given us,” she says.

“Naomi” airs new episodes on Tuesdays at 9 p.m. ET. on The CW. Read the rest of Jones’s Last Call interview ahead.

What was the last day of filming “Naomi” like for you?

The last day is definitely like the end of senior year [in high school]. You worked your hardest, and you’re actually putting in some of your best work, but you’re also like, “Oh, let me make sure I say hi to this person again, because I’m not going to get to see them in a few weeks.”

What was the last thing you did with your “Naomi” costars off set?

Actually, Kaci and I hung out yesterday [Jan. 23]. “Waves” is one of her favorite films and she was like, “You have to watch it,” so we got some bubble tea and watched a movie, which was fantastic.

Who is the last “Naomi” costar you texted?

This morning [Jan. 24], I texted Camila [Moreno], who plays Lourdes, because we have to get tested [due to COVID-19 protocols], and we were planning to go together. But now we’re just going to get lunch, because she already got tested when I texted her.

Besides your own show, what is the last series you binge-watched?

I was going to say “Euphoria,” but you can’t really binge watch that, which is great; I actually like the anticipation. But I was alternating between “Only Murders in the Building” and “Ted Lasso.”

What is the last song/album you listened to?

What is the last photo on your camera roll?

It’s actually a video of my parents, who live right outside of Atlanta where we shoot “Naomi.” This past weekend, my dad was cooking barbecue while playing charades with my mom. So, I have a video of my dad trying to do charades, but my dog is standing right next to him looking like he’s ready to play in the next round.

What is the last thing you bought online?

Oh, it actually came in yesterday [Jan. 23]. This is a really lame answer, but I got shoelaces for my Doc Martens, because my other ones were ruined.

What is the last thing you did for self-care?

When was the last time you were starstruck?

I saw Randall Park and I opened up the door for him, because he couldn’t get into this part of the building. I didn’t say anything, but I totally knew it was him.

What is the last piece of advice you received that changed your life?

Amanda [Marsalis], who directed the pilot episode of “Naomi,” told me to trust my instincts. At first I was like, “No, give me something more about the character.” So, I’m learning to trust my abilities and my instincts not just in terms of acting, but life in general and not double guessing what I’m intending to do, and knowing that what my gut is saying is probably the right choice.