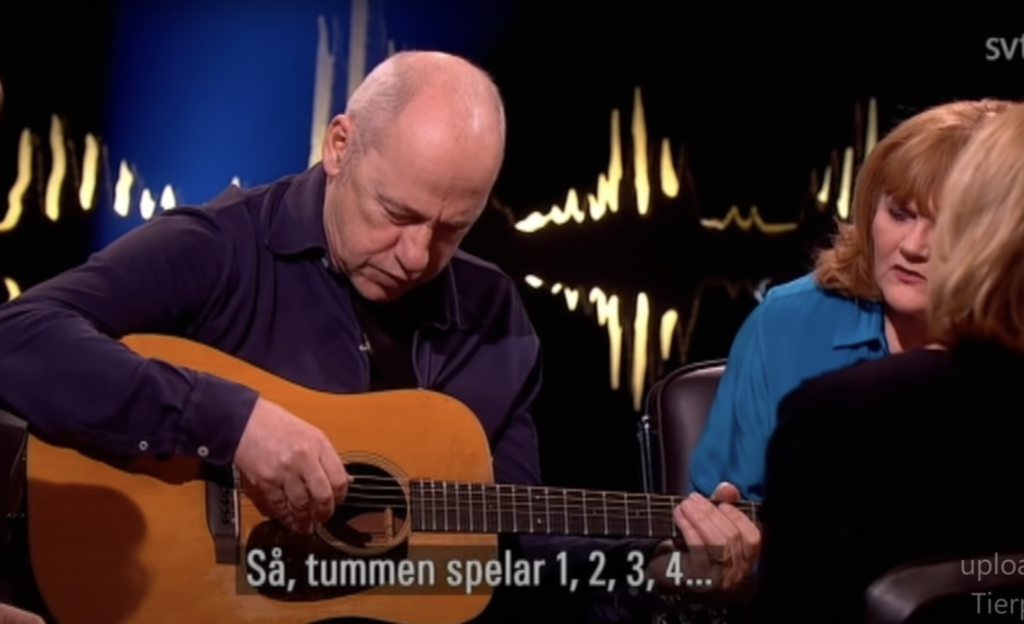 
So, you want to play guitar like Mark Knopfler? I mean, who wouldn’t, right? His style has been “legendary in the guitar community for decades,” notes Ultimate Guitar. Seems everyone who’s picked up the instrument has harbored a secret or not-so-secret desire to knock out “Sultans of Swing,” flawlessly, no matter what kind of music they play.

According to the Internet, it’s easy. There are How-to guides, promising 5 Ways to play like Knopfler. At least one lesson admits, “imitating Mark Knopfler’s playing style is much easier said than done.” I’ve seen it done convincingly once, by a guitar prodigy, raised by musicians, who toured with Buddy Guy. Otherwise, I’m here to inform you that you cannot learn to play like Mark Knopfler in Five Minutes.

For one thing, it took Knopfler himself decades to hone his style, tone, and technique — years and years of listening to old records, learning Blind Willie Johnson, Chet Atkins, and everything in-between. “Even when I would be about 20 or so,” he says, “I was already steeped in a lot of early country blues and everything.” Then there were the “years of living hand to mouth as a gigging guitarist,” Jamie Dickson writes at Music Radar.

Knopfler also admits, modestly, to being a bit of a prodigy. “I could do Elmore James-style steel from the very, very beginning when I was just a kid. After I heard it, I could just kind of do it.” When Dire Straits released their huge-selling fifth album Brothers in Arms in 1985, it seemed like blues guitar was the last thing anyone wanted. The era was all about showing off. Synthpop, new wave, metal, and rap ruled. Dire Straits played clean, laid-back tunes with tasty, tasteful American licks.

So, if you want to play like Knopfler, you’ll have to lose the pick. Moreover, you might want to consider switching to your non-dominant hand. “I’m left-handed,” he says in his Guitar interview, “but I play right-handed. They tried to teach me violin at school for two or three years — right handed– so by the time I was 15, I was into the habit of playing that way round.” It’s a lot to ask of any guitar student.

But there are plenty of ways to start picking up Knopfler’s basics, then practicing them year after year as he did, and listening to all of his influences. Watch his whole appearance at the top, giving brief fingerpicking demonstrations — from Singing Nun syncopated bass lines to his trademark singing double and triple stops. Learn more about his “finger style finesse” at Premier Guitar and see how his sound developed around his favorite guitars in the short film above.

Guitar Stories: Mark Knopfler on the Six Guitars That Shaped His Career

Mark Knopfler Plays a Poignant, Overdriven Version of “The Last Post,” Remembering the Many Lives Lost in World War I