Leonardo DiCaprio has revealed he was forced to jump into a frozen lake to save his two rescue huskies while on-set for his latest film.

Speaking on Entertainment Weekly’s Around the Table panel, DiCaprio and other cast members from Netflix special Don’t Look Up got to talking about the chaotic event that saw the actor back in ice-cold temperatures, just like the good ol’ Titanic days.

At the panel, DiCaprio was joined by co-stars Jennifer Lawrence, Meryl Streep, Jonah Hill and Tyler Perry, as well as the film’s director Adam McKay.

During the discussion, director Adam McKay made a reference to DiCaprio’s “tornado” huskies, which seem to get in quite a bit of mischief.

“Jonah would send me pictures of your ripped-apart couch,” McKay says to DiCaprio, referencing how the actor and Hill lived together during filming.

Lawrence immediately pipes up, asking DiCaprio to “tell the frozen lake story” — to which Hill says, “Basically they both fell in a frozen lake.”

Adding on, DiCaprio says: “Yeah, and then I went in — [living in California], I didn’t understand what you do at a frozen lake.”

“One of the dogs fell in,” adds Larence, “and he jumped in the frozen lake to save the dog and as soon as he pushed the one dog out of the pond the other one jumped in.”

“The other one started licking the one that was drowning and then we all were in the frozen lake together,” says DiCaprio.

The huskies are just two of three dogs DiCaprio looks after with his girlfriend Camila Morrone.

The huskies which are from the same litter, are named Jack and Jill and were adopted by the couple during the pandemic in 2020.

Over the last two years, Morrone has shared multiple adorable and happy snaps of her with the cheeky huskies on her Instagram.

READ MORE: How the royal families in Britain and Europe celebrate Christmas

Both DiCaprio and Morrone are great advocates for adopting, fostering and rescuing animals, with Morrone regularly using the hashtag #adoptdontshop when she posts a photo of her adorable pups.

Don’t Look Up is set for an exclusive streaming release on Netflix on December 24, 2021, at around 6 pm AEST. 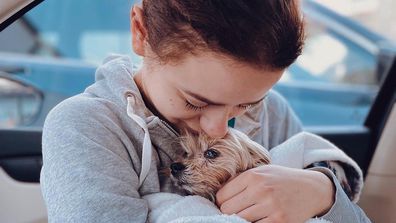 Celebrities and their pets: Photos