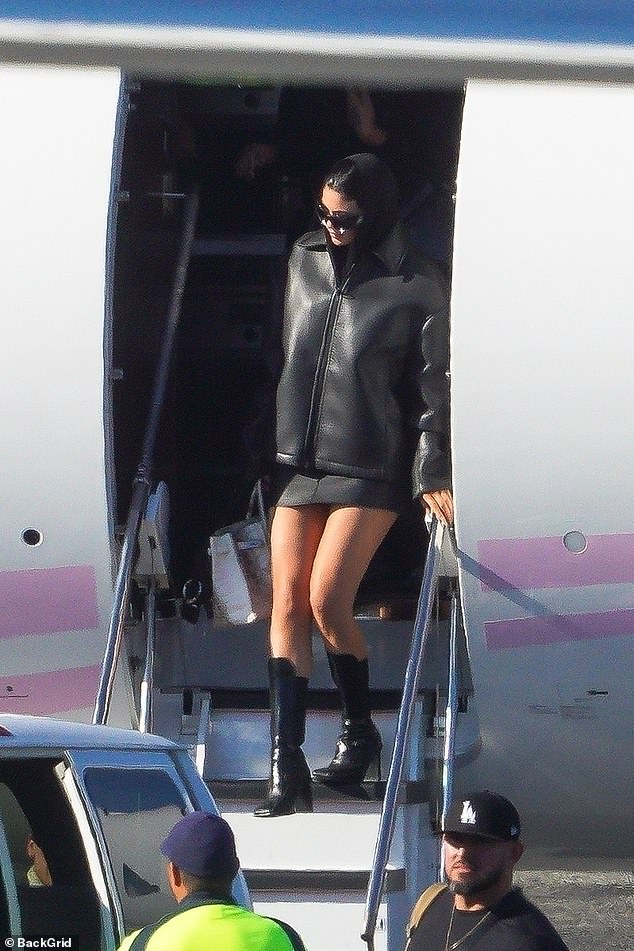 
Kylie Jenner was seen deplaning from her $70million private jet after taking over Paris Fashion week just weeks after being slammed for taking a 12-minute flight.

The 25-year-old Kylie Cosmetics mogul did not seem too concerned about her recent controversy as she touched down at LAX Airport in Los Angeles on Monday.

She showcased her legs in a black mini skirt along with a matching leather jacket zipped up with knee high booties.

Unbothered: Kylie Jenner was seen deplaning from her $70million private jet at LAX on Monday after taking over Paris Fashion week just weeks after being slammed for taking a 12-minute flight

Her raven-colored locks were pulled back in an elegant updo as she wore natural, complementary make-up.

The Kardashians star accessorized with a pair of black designer shades as she held onto a large Hermes Birkin bag.

Back in July Kylie angered many by taking a 12-minute flight on her private jet – for a 26-mile journey that would have taken just 39 minutes by car. 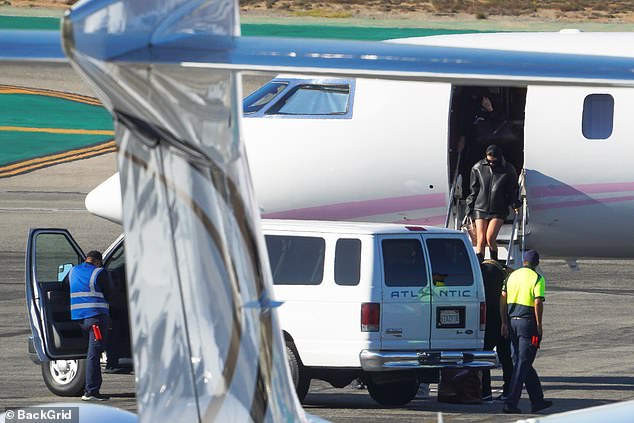 Wow factor: The 25-year-old mogul showcased her legs in a black mini skirt along with a matching leather jacket zipped up with knee high booties

Va va voom: Kylie showed off her impressive sense of style in a set of photos that was shared to her Instagram account from Paris Fashion week on Sunday

The billionaire was blasted as a ‘climate criminal’ for her short haul journey across California at the time despite her lectures on protecting the environment.

She took her $70million ‘Kylie Air’ private plane twice across the county on July 13, and again just two days later on July 15.

The Bombardier Global 7500 jet travelled for 35 minutes from Palm Springs, just outside LA, to Van Nuys, near her $36million Hidden Hills mansion on July 15. 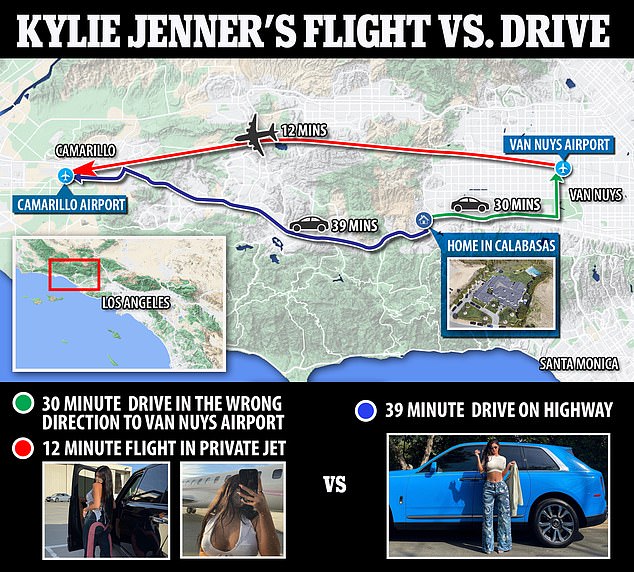 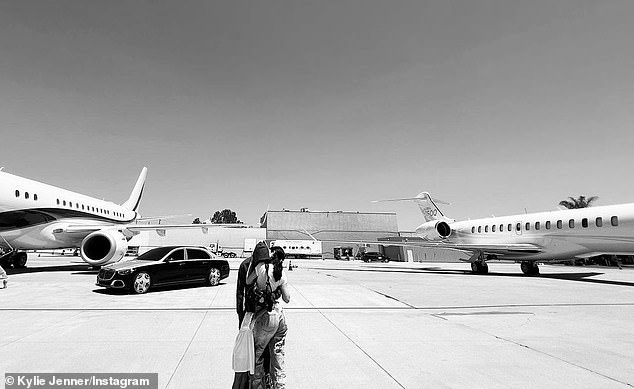 Shock: Back in July, Kylie was been called a ‘climate criminal’ for reportedly taking a 12-minute flight on a private jet after coming under fire for boasting about her and Travis Scott’s planes

Two hours later the mum-of-two then flew from Van Nuys, to Camarillo in in Ventura County, California – a trip which took just 12 minutes .

Earlier, on July 13, Kylie had also flown from Camarillo to Van Nuys a trip of just 17 minutes. She had then taken a 29-minute flight, going from from Van Nuys to Palm Springs.

Experts revealed her trip would have cost around $1600 to just fuel the plane, but if the private jet had been hired it would have set her back about $7200.

Had the star driven the 26-mile trip from her home in Hidden Hills, to Camarillo it would have taken her just 39 minutes without the horrendous traffic that is usual in those areas.

But instead she drove 30 minutes in the wrong direction to Van Nuys airport, before jumping on the plane – with the journey taking longer despite the 12-minute flight. 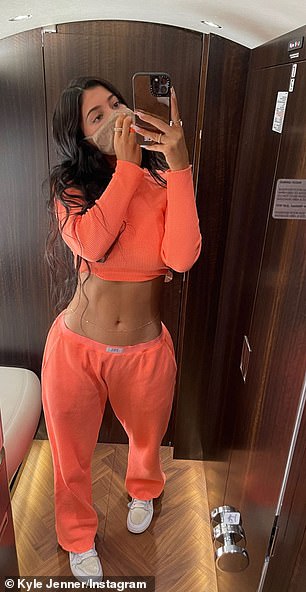 Flaunting: Jenner regularly posts pictures of her wealth from inside of her plane, despite previously forking out thousands on eco friendly products for her daughter (right, on the jet)

Over the years, the reality star has used her social media urging her fans to go green to save the planet.

She has consistently plugged the eco-friendly products she buys for her daughter Stormi, four, as well as telling her 359million social media she was going ‘vegan and clean’ with her products because it was ‘time to elevate.’

CelebrityJets also revealed that her plane travelled from Camarillo, California, to Van Nuys two days before on July 13 – a trip of just 17 minutes.

Her jet then took a 29-minute flight later the same day, travelling from Van Nuys to Palm Springs, California.

In the air: With plenty of room onboard – Kylie’s luxury jet has 10 white leather seats embroidered with her initials (pictured on board earlier this year with Stormi and Khloe) 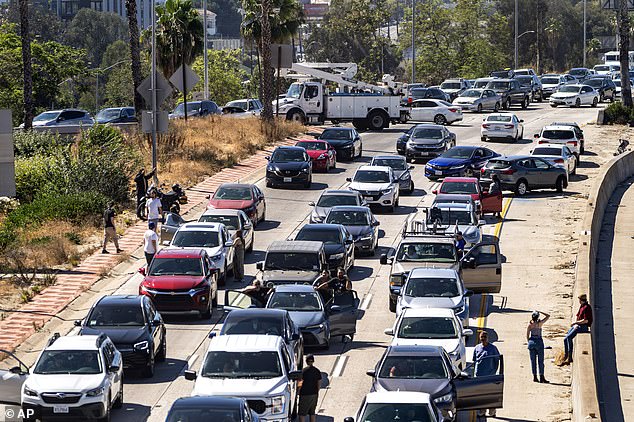 Rush hour: It is likely that the star was trying to avoid Los Angeles congestion, with the city’s roads often becoming gridlocked

Jenner purchased the plane in 2020 for a rumored $72.8 million and fashioned it with a whole lot of neon, a full bar, and Hermès blankets over every seat.

Aviation experts have branded the star as ‘irresponsible’, after revealing that it would have cost Kylie at least $1600 to fuel the car.

Paul Charles, CEO of travel consultancy The PC Agency, told DailyMail.com: ‘Private jets certainly have their place, especially with so many delays and cancellations for consumers using airports globally at the moment.

‘But the focus should be on responsible travel, for example taking private jets and using carbon offset schemes, or taking jets which are powered by sustainable aviation fuel (SAF).

‘Taking one for 12 minutes when the car journey would have been more appropriate is the height of irresponsibility. ‘ 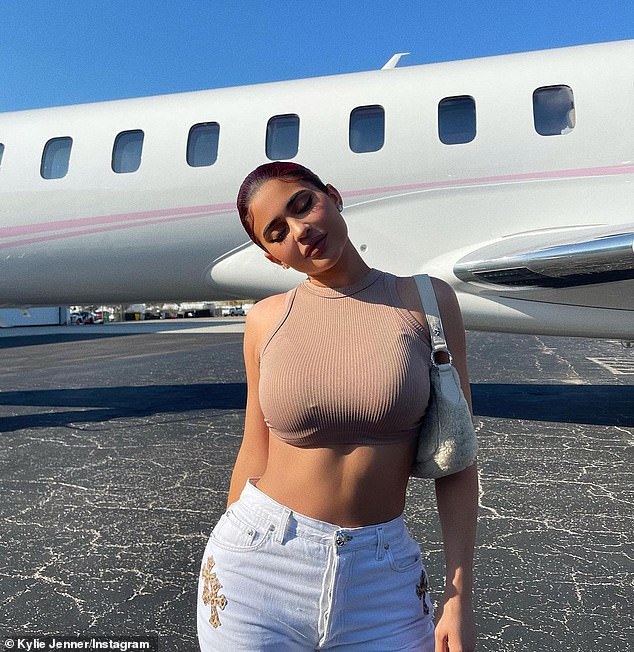 Jet set: The billionaire was pictured taking a quick 30-minute day trip to Palm Springs, California on her customized plane in June

Fuming fans responded to her string string of very short-haul flights, criticizing Kylie for being a ‘climate criminal’ and not using other modes of transport.

They pointed out that the star had travelled 13 miles out of her way to get to the Van Nuys airport, before travelling in the wrong direction, adding it is the ‘worst thing’ about the situation.

One person raged: ‘Kylie seems to love taking her jet for short trips that are probably drivable. Seems to be a theme here.’

Another said: ‘Kylie Jenner: full time climate criminal. These jets should never be allowed to take off.’

Others have said the stars journeys should be ‘illegal’ while others described her multiple flights in a day as ‘gross’.

A third person commented: ‘She took a 12minute flight??? Why is this even allowed she could’ve seriously went in a car.’