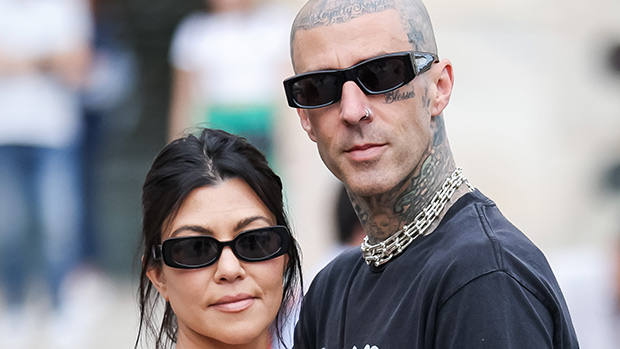 
Kourtney Kardashian and Travis Barker are enjoying a post-wedding honeymoon in Milan, Italy, and they were spotted by paparazzi while out and about on May 26. Kourtney wore leather pants and a see-through white crop top for the outing, which you can see here. Her lingerie was visible under the top, and she completed the look with a puffy jacket, which she wore off her shoulders. She completed the look with a ponytail and tan-colored shoes.

The reality star held hands with her new husband, Travis, who rocked jeans and a studded leather jacket. Both Kourtney and Travis rocked sunglasses amidst the nice Milan weather, as well. They appeared to be alone for the outing, but earlier this week, Travis’s kids, Alabama Barker and Landon Barker, were with them in another series of Milan photos. As for Kourtney’s three kids, they flew home after the wedding to spend time with their dad, Scott Disick, who celebrated his 39th birthday on May 26.

Kourtney and Travis tied the knot during a luxurious wedding ceremony in Portofino on May 22. Kourtney’s famous family members were in attendance, along with the couple’s friends, like Megan Fox and Machine Gun Kelly. The whole KarJenner family, including the bride and groom, wore Dolce & Gabbana ensembles throughout the wedding weekend. Andrea Bocelli gave a stunning performance at the reception, as well.

One week before the Italy nuptials, Kourtney and Travis were actually legally married at a courthouse in Santa Barbara. Kourtney’s grandmother and Travis’s father were in attendance for the low-key affair, as they could not make it to Italy for the bigger celebration. The lovebirds also eloped in Las Vegas back in April, although they did not obtain a marriage license to make it official at the time.

Kourtney and Travis were friends for years before they took things to the next level in 2020. Travis went on to propose in Oct. 2021 on the beach. The proposal was documented on season one of the KarJenner family’s new reality show, The Kardashians.