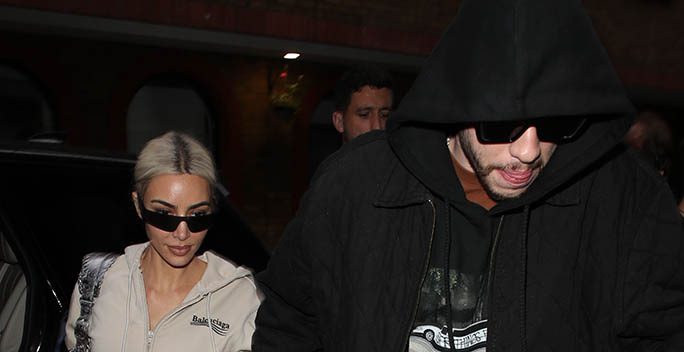 You can always count on Kim Kardashian to make a statement. The reality television superstar has been sporting chic outfits while out with Pete Davidson in London. After stepping out for a cozy date night on Monday, the sought-after celebrity couple hit the streets for a shopping trip.

For the retail therapy excursion, Kardashian opted for another fashionable fit by Balenciaga. The ensemble resembled the outfit she recently wore while out with Davidson.The shapewear mogul stepped out in a cream cropped Balenciaga hoodie. The casual outerwear featured the label’s signature logo near the corner.

Davidson was cool and comfortable for the outing. The “Saturday Night Live” alum — who completed his last episode earlier this month — wore a black bomber jacket with a graphic hoodie and green sweatpants. He finished off his look with a pair of white sneakers.

In true fashion form, Kardashian completed her look with one of the most unique shoe trends, which is also her go-to footwear choice — the boot pant. The hybrid garment is comprised of skintight leggings with built-in pointy stiletto boots.This fashion/footwear fusion didn’t start with Kardashian or Balenciaga. Nearly a decade ago, shoe designer Tamara Mellon dreamt up a style she called “legging boots,” which she’d pitched during her tenure at Jimmy Choo without success.

Kardashian is known for having a trendy and daring sartorial sense. The business mogul tends to gravitate towards pointed-toe boots and slick styles that stay true to her edgy aesthetic. The former “Keeping Up With the Kardashians” has made her mark in the fashion industry by creating her own Skims line that focuses on loungewear and shapewear with functionality in mind. She has also starred in campaigns for Balenciaga, Balmain and Fendi.

Make a statement in shimmery boots.