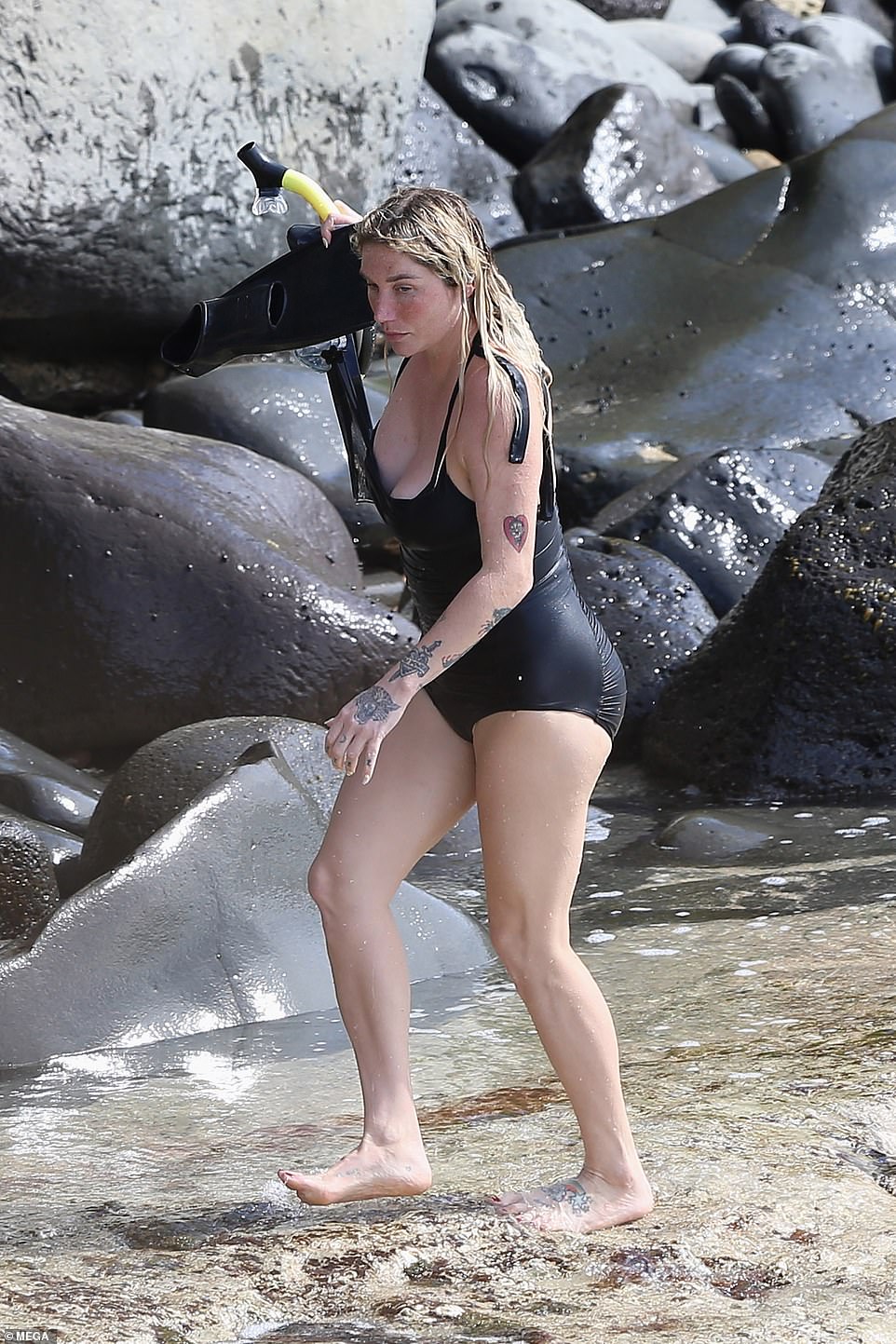 
Kesha made waves as she enjoyed a fun-filled vacation in beautiful Hawaii.

The Tik Tok songstress, 34, flashed some cleavage in a low-cut black bathing suit as she hit the beach with several girlfriends on Tuesday.

Heads turned as the beauty returned from a snorkeling session with her long legs and toned, tattooed arms on full display.

Making a splash! Kesha flashed some cleavage in a plunging black bathing suit as she hit the beach in Hawaii with several girlfriends on Tuesday

The songstress was spotted exploring the ocean blue with her friends, and raising an arm into the air as she chatted with a fellow swimmer.

Once she was done, she waded knee-deep through the waves with her paddle and snorkel in hand before climbing barefoot through a pile of rocks.

The relaxing, sun-kissed day also saw Kesha kick back on the beach with a soda as her friends sunbathed.

The songstress was the picture of tranquility as she cooled down on the beach and caught up with her pals.

Beach babe! Heads turned as the beauty returned from a snorkeling session with her long legs and toned, tattooed arms on full display 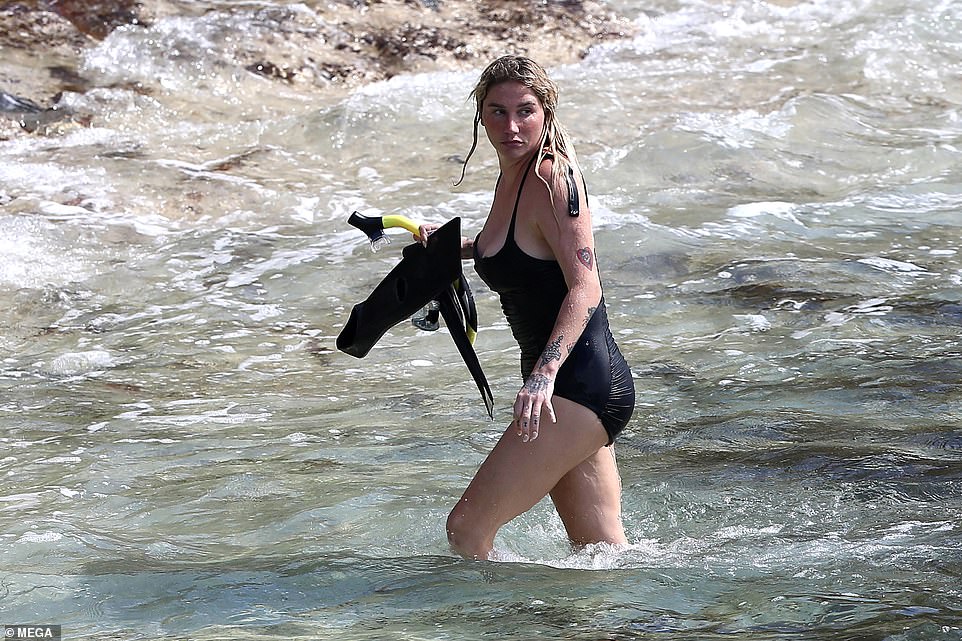 Making waves: The star looked breathtaking as she finished up her snorkeling session

She styled her hair into a beachy, mermaid-esque side braid that cascaded down the right side of her shoulder.

Kesha seemed to be having a blast catching up with her friends as she enjoyed a much-needed break from her ever-busy music career.

The trip comes after Sony was denied a request to protect record contract details and other financial plans in Kesha’s ongoing legal battle with Lukasz ‘Dr. Luke’ Gottwald.

New York Supreme Court Justice Jennifer Schecter denied Sony’s request last month and ordered that contracts, business plans and financial records be unsealed in a matter of days, according to The Hollywood Reporter. 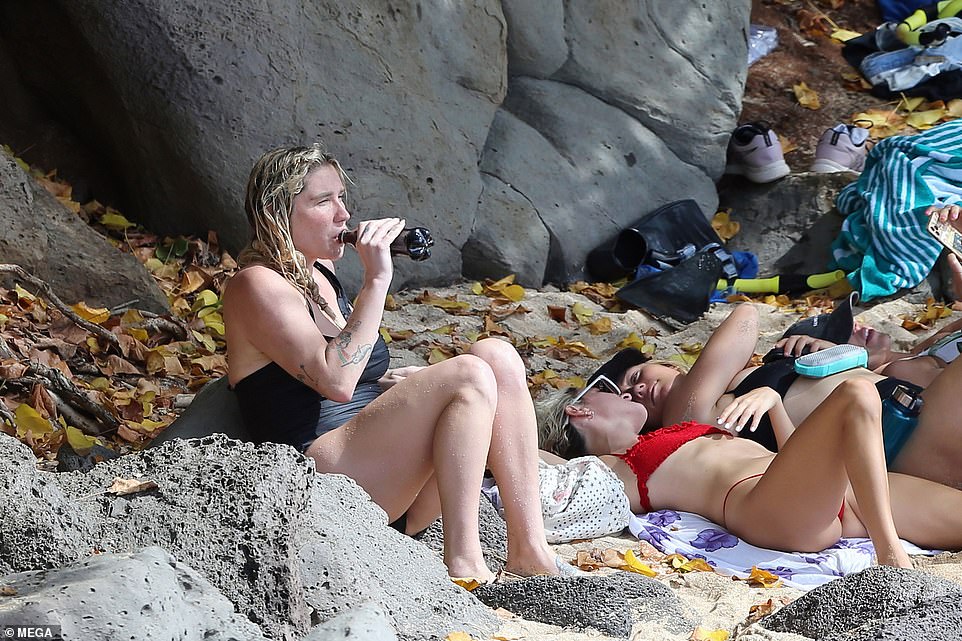 Life’s a beach! Kicking back beside her friends, Kesha was the picture of relaxation as she enjoyed her soda 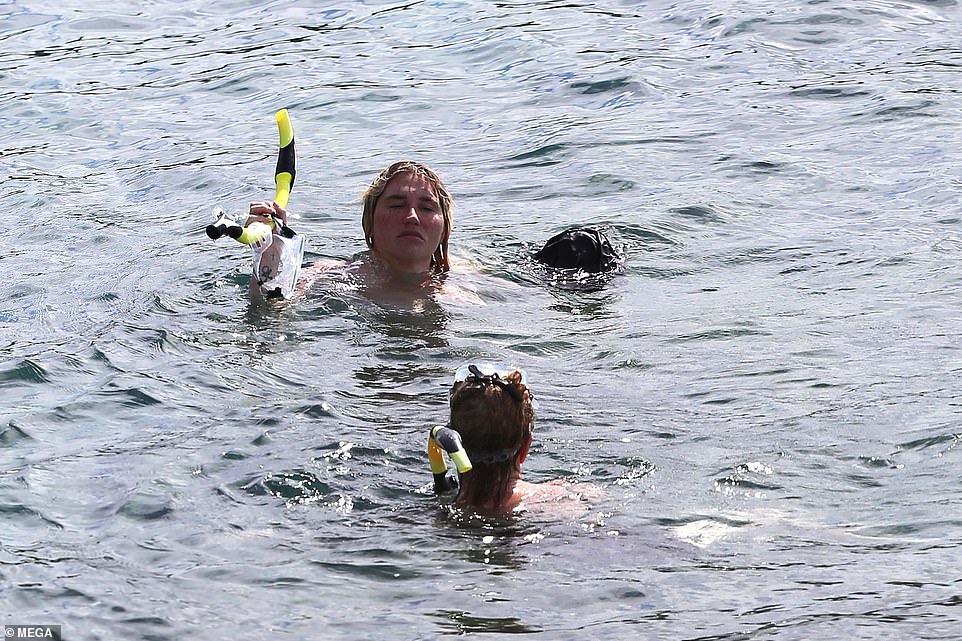 Ocean blue: The songstress was spotted exploring the surf with her friends

Bathing beauty: There was no denying just how amazing the songstress looked in her black swimsuit

Kesha’s legal battle with her former producer Dr. Luke has been ongoing since 2014 when she filed a lawsuit alleging he raped her in a hotel more than 15 years ago.

The judge’s ruling will pave the way for the public to learn more about music deal making than ever before.

Part of the ongoing battle revolves around how much Kesha has been paid for her work as an artist, which has all been kept secret and will be made public soon.

Sony Music had argued that the release of details such as royalty rates, artist advances, producer fees and recording budgets would cause ‘substantial harm’ to the company. 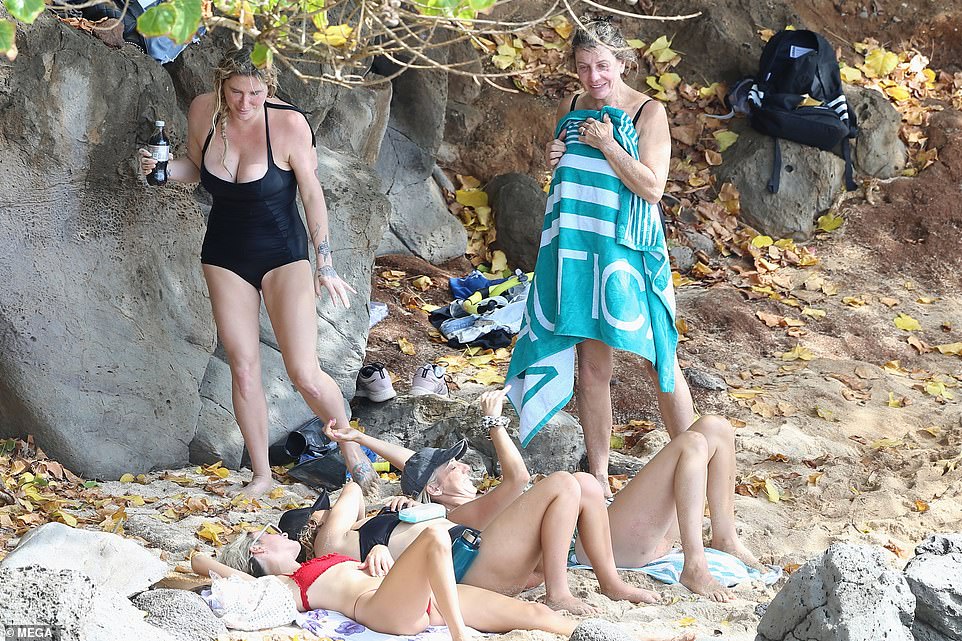 Island time: The songstress was the picture of tranquility as she cooled down on the beach and chatted with her friends 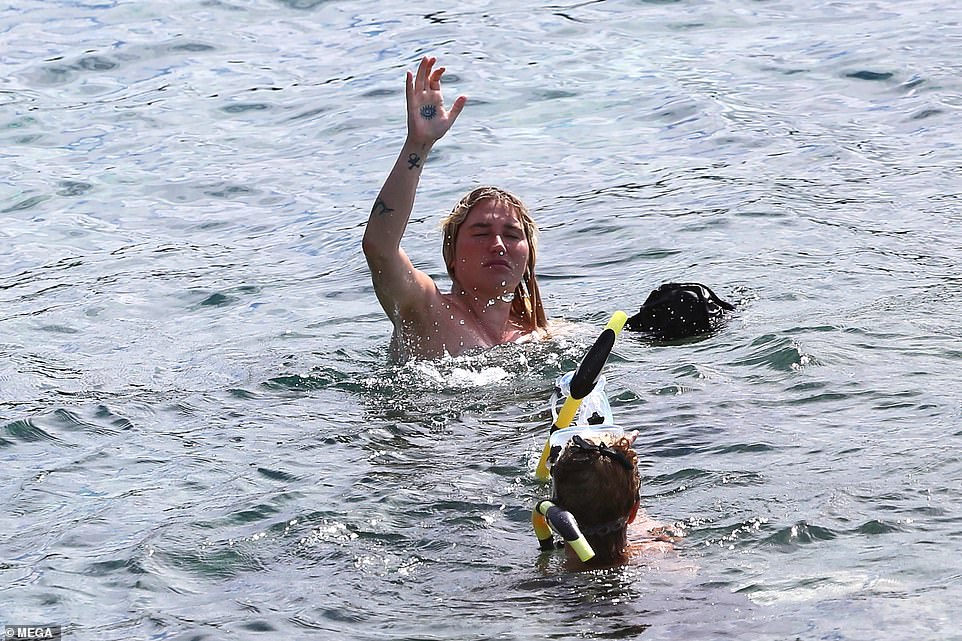 Excursions: The star raised her friend in the air as she chatted with a fellow swimmer 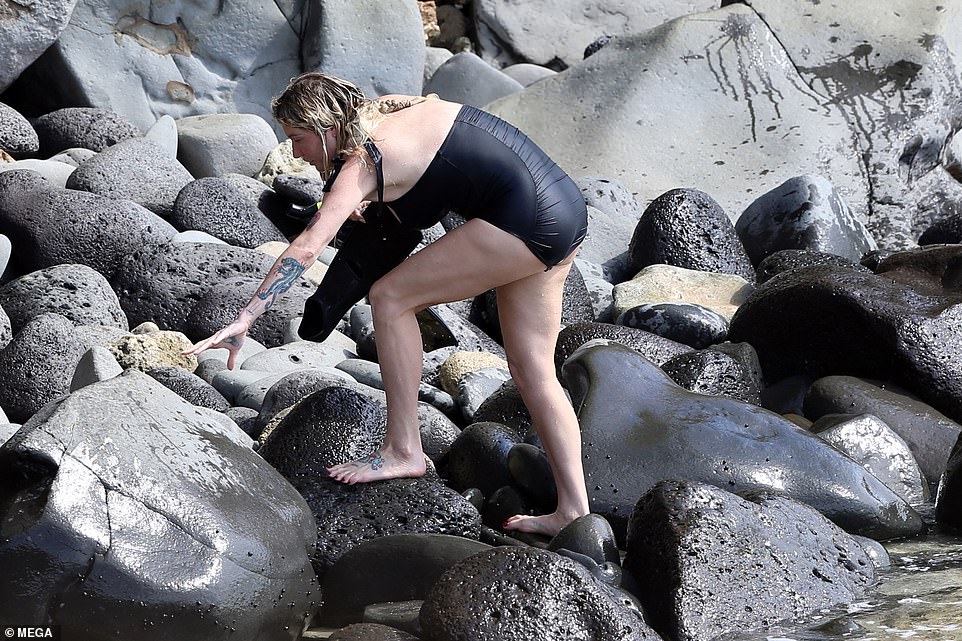 She rocks! The 34-year-old climbed barefoot on the rocks following her dip

They also argued that, in terms of their record contract with Kesha, if those details were to be made public, ‘Sony’s competitors would likely use it to encourage artists and producers to sign with other record companies, instead of Sony.’

Kesha’s attorneys at O’Melveny stated, ‘That is a stunning admission of the unreasonableness of Sony’s deal terms for Kesha’s albums.

‘Sony, at bottom, may be embarrassed about the terms of the deal under which it is requiring Kesha––a Grammy-nominated artist who has generated enormous amounts of money for the label––to continue to work, but that is not a valid basis on which to keep the information confidential,’ the statement added.

Both Kesha and Dr. Luke’s teams have been preparing for the upcoming trial, with the O’Melveny team stating they plan on showing how her shoddy contract helped hide the ongoing abuse. 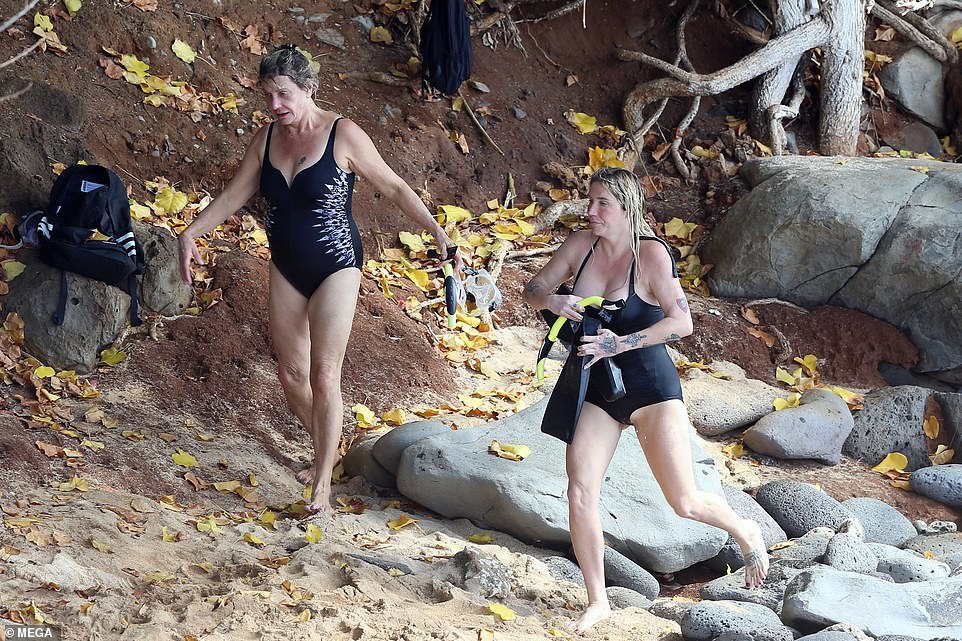 Back on dry land! The star and her friend returned to camp with their snorkeling gear in hand

Hair today: She styled her hair into a beachy, mermaid-esque side braid that cascaded down the right side of her shoulder

‘Dr. Luke is suing Kesha for breaching her contract with his production company, and Kesha will show at trial that the paltry deal terms and nearly a decade of never-actually-fulfilled promises to improve the contract is one of the manipulative tools that Dr. Luke used to coerce Kesha into keeping silent about his abuse,’ the statement read.

The judge is allowing Sony to redact personal identifying information and contact details for its employees, though the details about the contracts and financials will still come to light.

‘Any other asserted privacy interest Sony has in its records, many of which are quite old, is overwhelmingly outweighed by the public’s right to fully understand the parties’ contentions regarding the substantial damages sought by plaintiffs,’ Schechter said in her brief.

Me time: Kesha seemed to be having a blast catching up with her friends as she enjoyed a much-needed break from her ever-busy music career 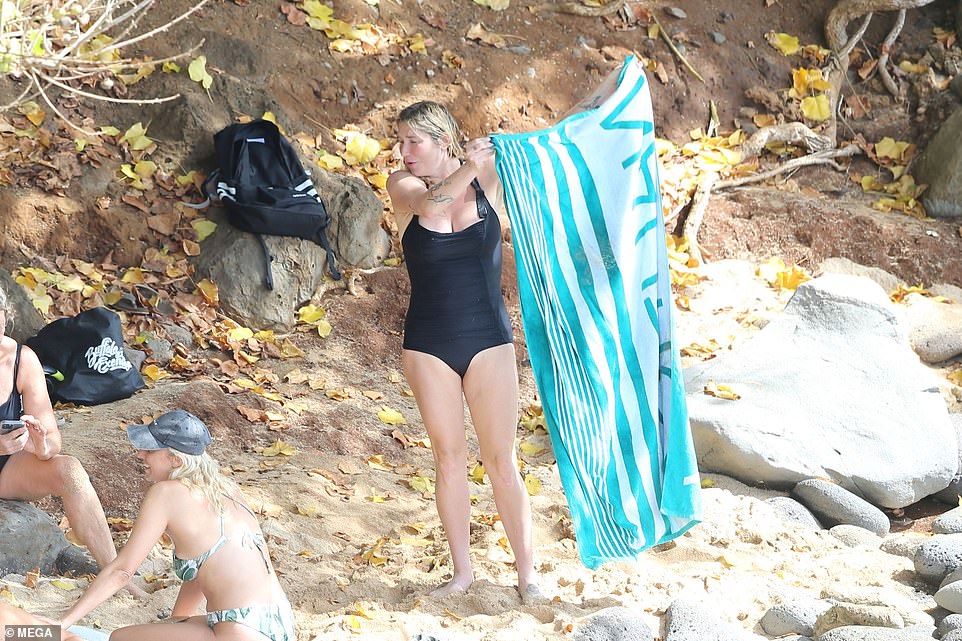 Shake it out! The music maker appeared to be shaking off excess sand from her striped towel

Kesha initially sued Dr. Luke back in October 2014, claiming he sexually assaulted and harassed her over 10 years of working together.

Dr. Luke countersued over the rape charge while Kesha filed another countersuit that his claims of defamation have no merit and are subjected to a law intended to protect free speech from frivolous litigation.

Schechter will soon start ruling over what evidence will be admissible in the trial. 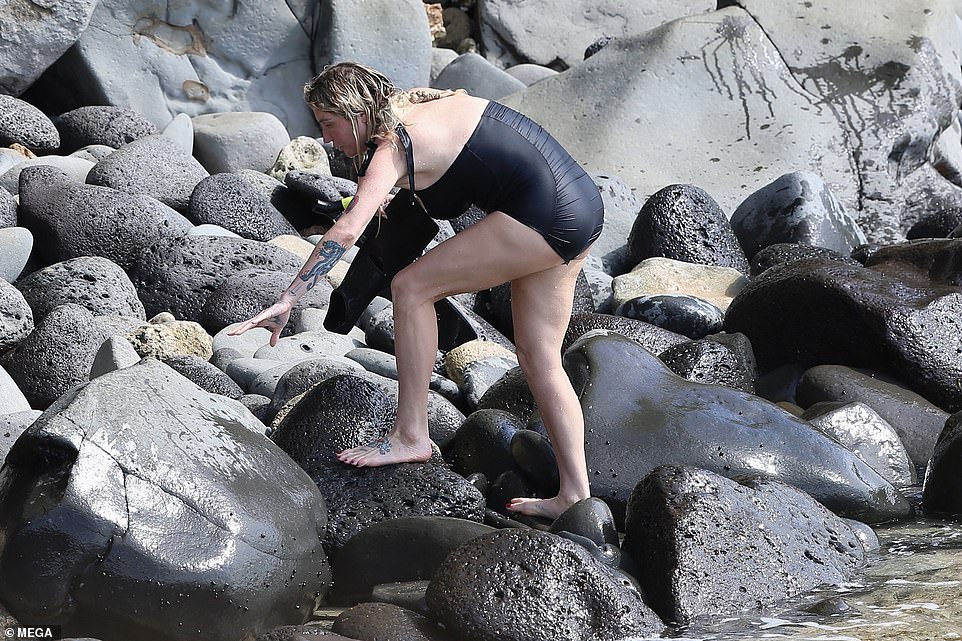 Easy does it: The Die Young singer carefully made her way through the rocks