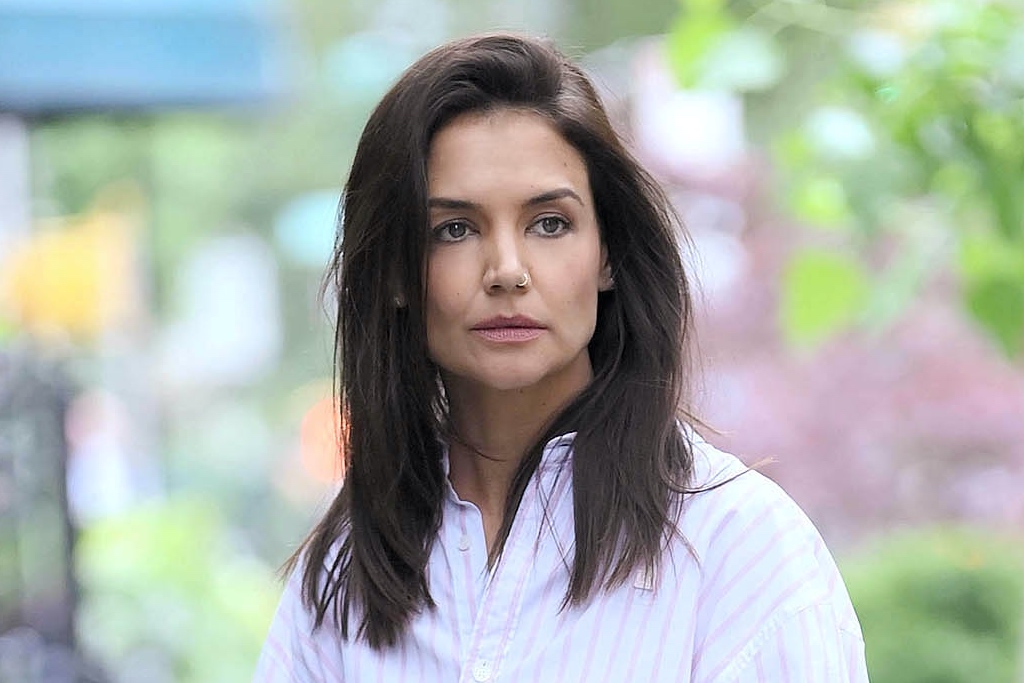 Katie Holmes proved her penchant for effortlessly eclectic style while in New York City this week.

The “Dawson’s Creek” star was spotted strolling in Manhattan on Tuesday afternoon, wearing black jeans with an oversized white button-down shirt. The wardrobe staple featured an oversized fit and was covered in thin pink pinstripes; naturally, Holmes made it her own by tucking it asymmetrically into her waistband and unbuttoning the cuffs. The effortless duo was finished with stud earrings and a silver nose ring.

Completing Holmes’ look was Kate Spade’s woven $398 Manhattan tote, featuring a multicolored striped palette of yellow, blue, white, orange and olive green fabric trimmed with brown leather. Holmes has been a frequent supporter and longtime fan of the brand over the years, still owning her first Spade bag and attending the brand’s presentations every season.

Finishing the “Batman” actress’ ensemble was a pair of sharp sneakers. However, the style gained a retro edge from curved brown rubber soles with thin white outsoles. Its’ paneled black uppers, composed of suede and quilted fabric, included a lace-up shape with almond-shaped toes — instantly reminiscent of ’80s athletic footwear. Holmes’ pair streamlined her jeans to create a longer silhouette, while adding a truly effortless air to her entire outfit.

Retro sneakers like Holmes’ give a nostalgically sporty boost to any outfit, thanks to their curved uppers reminiscent of the ’70s and ’80s. Styles with similar silhouettes have recently emerged from a range of brands, including Loewe, Rag & Bone and New Balance.

Holmes is best known for her classic everywoman style, often re-wearing beloved pieces year-round. On the footwear front, she keeps her selections classic with Veja and Adidas sneakers, Gucci loafers and Bottega Veneta mules. Beyond her sharp off-duty footwear, Holmes’ experience in the fashion industry also earned her the title of an Olay brand ambassador. Previously, she served as the face of Bobbi Brown Cosmetics, Miu Miu and Ann Taylor. Additionally, Holmes was the co-founder of fashion line Holmes & Yang, launched with her then-stylist Jeanne Yang, from 2011 to 2014.

Click through the gallery to see more of Katie Holmes’ best street style looks over the years.