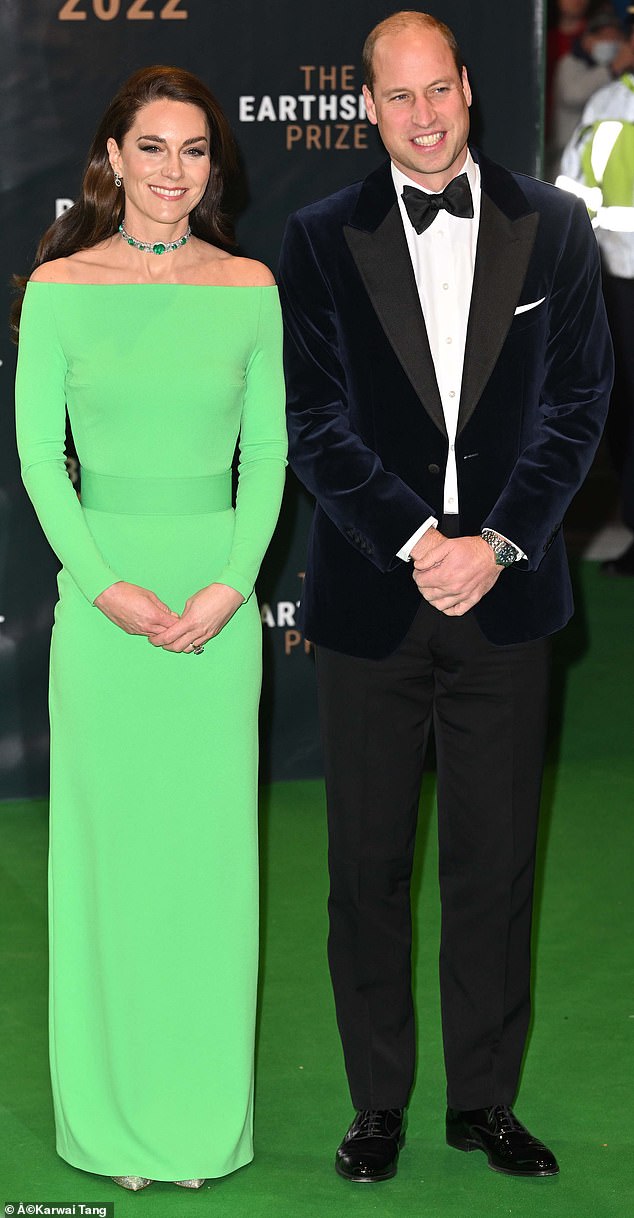 
The Princess of Wales showed off her eco fashion credentials this evening as she stepped out at the Earthshot Prize Awards ceremony in Boston.

The Sabrina frock, by Solace London, costs £74 a night to rent. It is described by HURR as a ‘floor length modern gown featuring an exaggerated neckline’.

It boasts a ‘body conscious fit’, and a concealed closure belt to define the waist, as well as the brand’s signature high kick split.

The Princess of Wales donned a hired gown for the awards tonight, rented from HURR London (pictured with Prince William at the Earthshot Prize Awards at Fenway Music Hall in Boston) 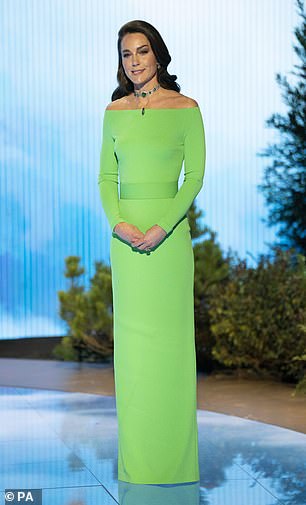 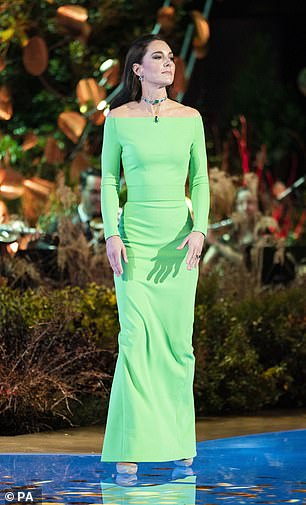 The royal paired the rental gown, which retails for around £350, with a choker which was previously owned by her late mother-in-law Princess Diana.  The necklace, which was gifted to Queen Mary in 1911 by the Ladies of India, was given to Diana by Queen Elizabeth, on lifetime loan.

She finished her outfit wearing her glossy long hair loose, and styled into a side parting. Meanwhile, she chose a dramatic make-up look, pairing a fresh base with dark smoky eyes, and a natural lip.

Ahead of the event, the royal couple revealed they had implemented a host of  ‘green’ measures for the evening’s soiree, from wearing ‘recycled’ outfits on the red carpet to using burlap decor and a re-used green carpet.

Before guests arrived at the gala, they were reportedly given eco-friendly advice and rules to follow, with attendees encouraged to ‘consider their clothing’ for the occasion and opt for ensembles that can be re-used, or have already been purchased second-hand. 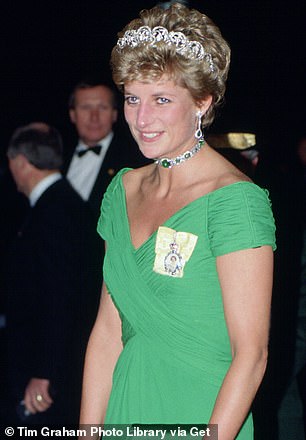 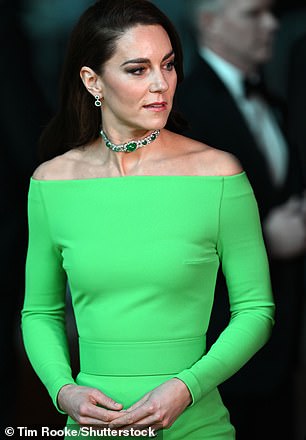 As part of her ‘green’ outfit, Kate (right) donned a green and diamond emerald choker once owned by her mother-in-law Diana, Princess of Wales (left) 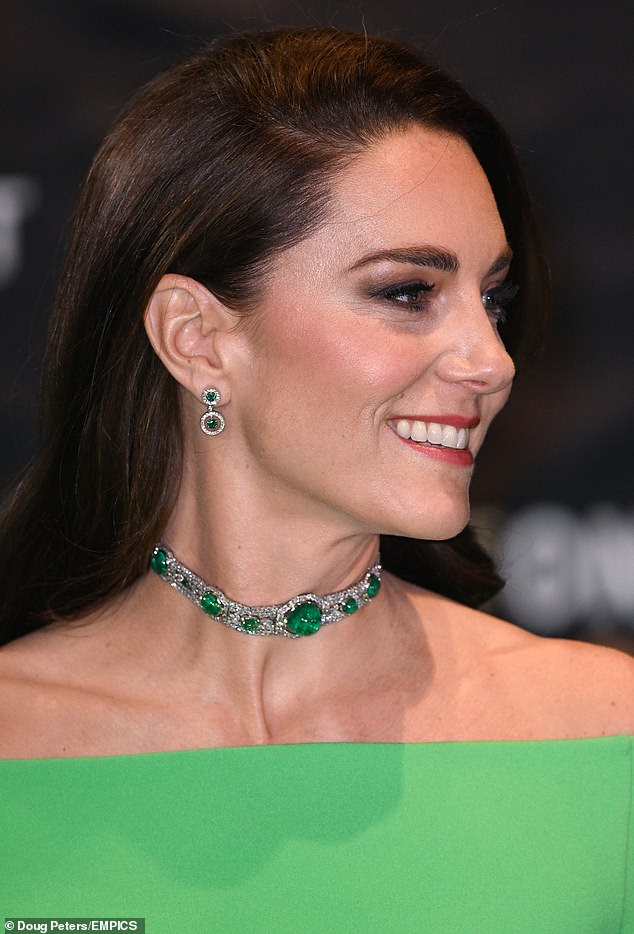 The Princess of Wales shows off the ‘pre loved’ choker she wore for the event, pairing the green stones with her green crepe frock 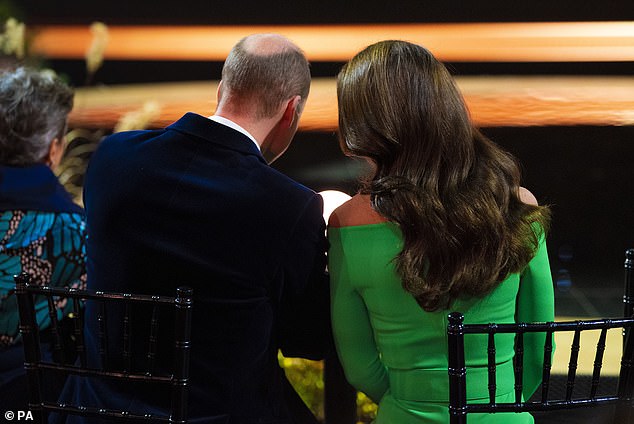 The royal paired the rental gown, which retails for around £350, with a choker which was previously owned by her late mother-in-law Princess Diana

Travel plans for guests were also given environmental updates: with all transportation being used with Boston being electric or hybrid and any ‘unavoidable’ flights that were taken have been ‘recorded and the CO2e impacts calculated and balanced’.

Upon their arrival at the event, it is thought that guests were treated to a host of ecologically-minded measures, from the plant-focused decor to the vegan and vegetarian-only catering options.

Instead of a red carpet for the stars to walk down, last year’s green carpet is being re-used – and it will be recycled afterwards.

The entryway and the event itself features over three acres of plants, including New England-grown evergreen and deciduous trees- ‘all native and grown locally,’ according to Earthshot’s new CEO Hannah Jones, formerly Nike’s first chief sustainability officer.

All the flowers have all been grown locally within a 100 mile radius of the MGM Music Hall in Boston. Most are ‘root ball’ plants, wrapped in burlap, to stay as green as possible and will be donated to local community-based organization after the show. 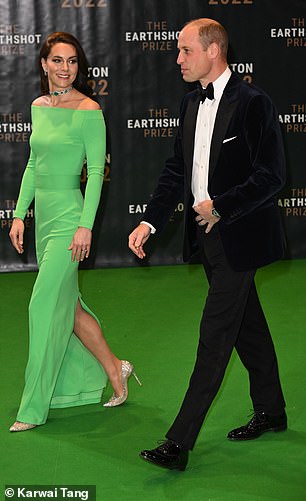 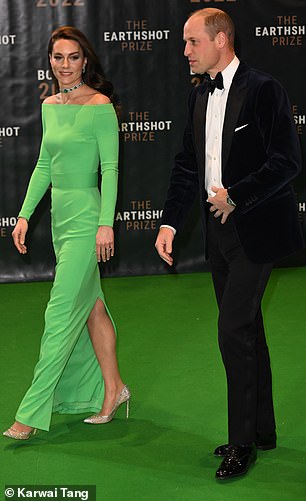 The royal couple are snapped striding down the green carpet at the event, which has been recycled from last year’s awards ceremony

BBC Studios, who are staging the event and won a BAFTA for last year’s show, have flown over just 10 members of staff out of a crew of 150, hiring local firms instead.

No gas lighting will be used with all fixtures being LED battery-operated and charged locally in Massachusetts.

The stars’ hotel is walking distance from the venue and everyone is being encouraged to either use the tram or take a fleet of electrically-powered and hybrid taxis.

Even the make-up being used is largely vegan and certified cruelty-free, while the food being served to stars and crew is plant-based – and there is a ban on single-used plastics. 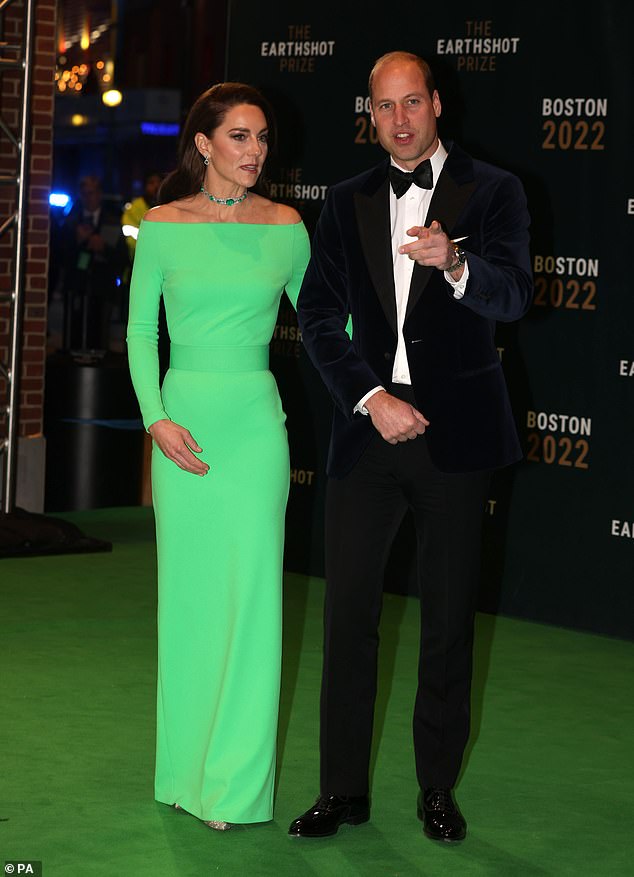 According to reports, a slew of measures were put into place to ensure that the event tonight (pictured) was one of the most eco-friendly awards ceremonies (pictured: the Prince and Princess of Wales) 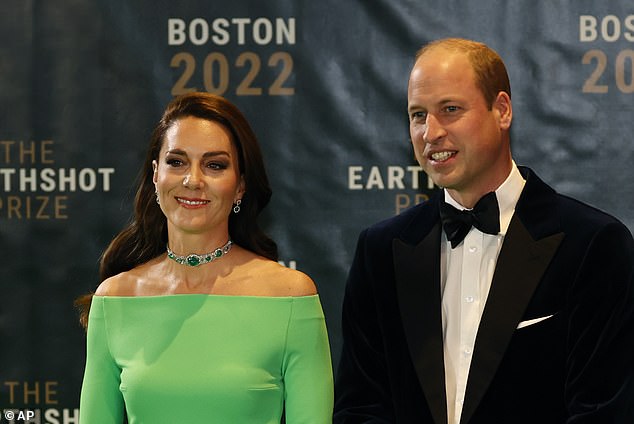 Guests were encouraged to opt for more eco-friendly choices when it came to their outfits for tonight, from renting or rewearing clothing, instead of buying something new

Earthshot CEO Hannah Jones said: ‘We are an environmental organization and will assiduously strive to think about our own environmental impact with everything we do.’

‘We are encouraging everyone that is coming to the awards to take the lowest carbon impact option possible. What isn’t will be offset.’

The Prince of Wales opened up about the awards in an opinion piece he wrote for the Huffington Post ahead of tonight’s ceremony.

He revealed he created the Earthshot Prize inspired by John F Kennedy’s Moonshot speech in the 1960s – and he wanted to bring the second awards ceremony to the East Coast city because it was the birthplace of the late President.

Describing the Prize, which awards innovation in environmental conservation and sustainability, he said: ‘If it sounds ambitious, optimistic, and hopeful ― that’s because it is.’ 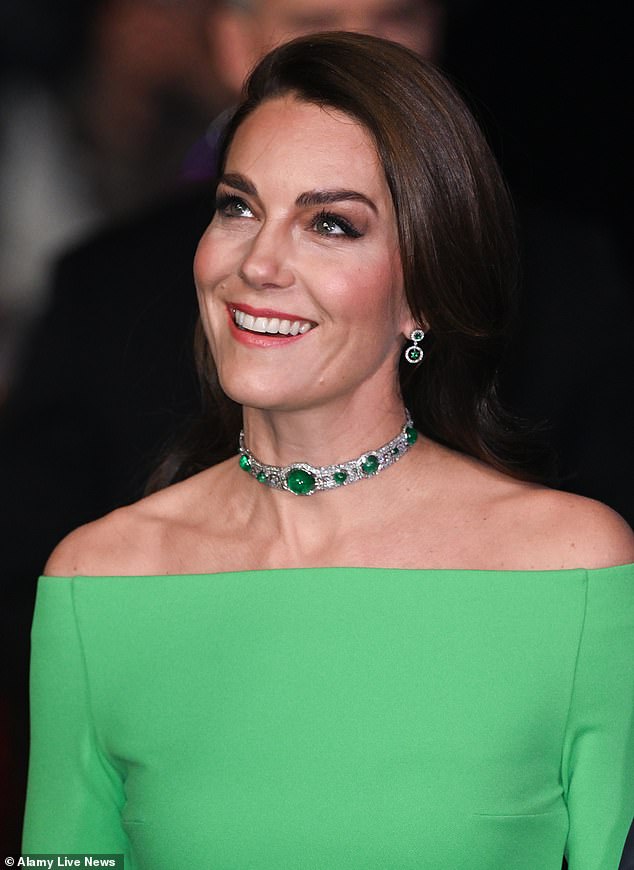 According to the Earthshot organisation, guests were ‘encouraged to take the lowest carbon impact option possible’ while travelling, with the excess offset 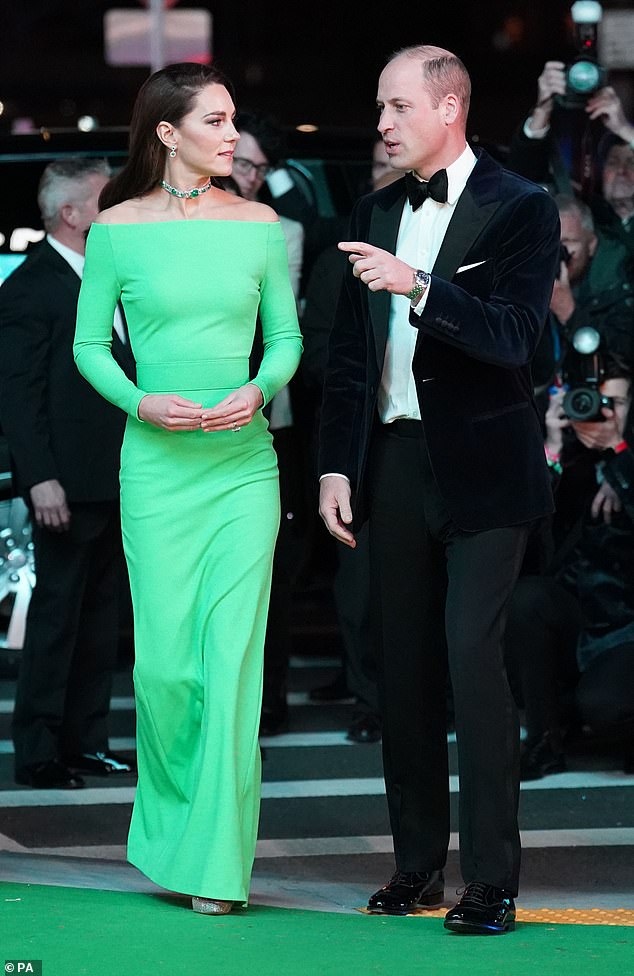 According to Prince William (pictured, right) the Earthshot Prize was built on a foundation of optimism

‘Every day we learn of a new fact or figure, or we reach an alarming milestone that marks our seemingly inexorable ― and rapid ― march toward climate catastrophe,’ he wrote, citing 15 weather disasters in the last year in the US alone.

However, he praised the efforts of last year’s finalists in preserving coral reefs and protecting marine areas, which he said was creating momentum in the fight to protect the environment.

Encouraging people to share his optimism about the future of the planet, he said: ‘Dire predictions about our natural world aren’t the only side to this story and they don’t have to be our future.’

He added optimism was the ‘foundation’ on which the Earthshot Prize was built, and went on to praise the efforts of the finalists from last year’s awards against a background of increasing natural climate disasters.